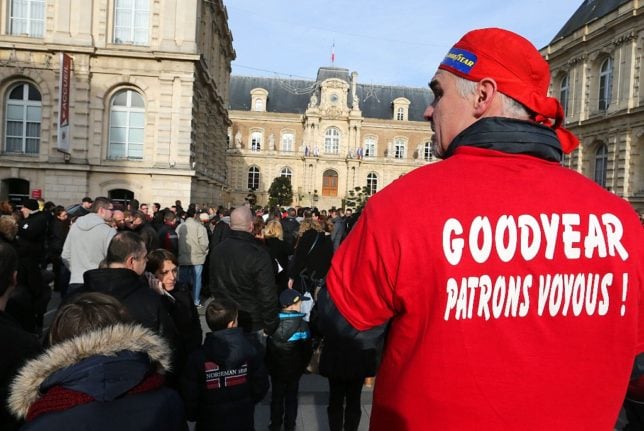 On Tuesday, workers at a Renault car parts factory in northwest France held seven managers against their will for around 12 hours in an attempt to prevent the plant being sold.

But not only were their actions not particularly unusual in France, they pale into insignificance beside some of the more extreme ‘boss-napping’ actions.

In 2015, angry Air France employees chased down several executives at the airline’s headquarters near Paris, stripping one of them naked to the waist in front of TV cameras and leaving another with his shirt and jacket in tatters.

In 2014, after a five-year dispute, the executives of Goodyear’s French unit announced plans to close the Amiens tyre plant, putting 1,173 jobs at risk. Workers responded by holding two executives hostage in the building for two days and burning tyres outside the factory.

In 2009 in the town of Pithivers the local manager of US conglomerate 3M was taken hostage in a dispute over severance pay for recently laid-off workers. He was held overnight but on the plus side the employees did provide him with a rather nice meal – moules frites.

The year of 2009 saw a lot of lay-offs due to the effect of the financial crash, and workers in several companies escalated disputes over severance pay to kidnapping, with bosses at Caterpillar being held overnight in Grenoble and managers the Scapa Group – including visiting British bosses – held for 24 hours in Bellegarde in the foothills of the French Alps.

And it’s not just in factories – in 2011 a group of parents at a private Catholic school in the southern Bouches-du-Rhône area held school staff hostage in an attempt to get a teacher fired over the lack of progress and discipline in her class.

How did this become such a big thing?

It’s no secret that labour relations in France can be quite robust – the country has one of the world’s highest rate of strike days per year and unions are not shy about escalating disputes if they feel no progress is being made.

‘Boss-napping’ is not new, but the years 2007-2011 saw a particular spate of it – probably linked to the ongoing effects of the economic crash that saw more workplaces than usual closing down or laying off workers.

The number of high profile incidents saw then-president Nicolas Sarkozy promise to put an end to such practices. He did give the police extra powers to intervene, but it’s fair to say he didn’t succeed in stopping the practice altogether.

But is the tactic effective?

In the case of factory closures there are so many factors – including government subsidies and sweeteners to firms to stay open – that it’s hard to say what effect boss-napping has, but in the case of salary or severance pay disputes several companies increased their offer after the boss had spent a few hours as a hostage.

In the case of the 3M workers in Pithiviers, the appeals court ruled in their favour and workers got a higher rate of severance pay while Caterpillar and New Fabris upped their offers after a boss-napping. That Catholic school also folded under pressure and sacked the teacher at the centre of the dispute.

And how does this go down with multi-nationals who have non-French owners?

Extraordinary badly, in the case of one particular American businessman.

While French business owners may accept this sort of thing as all in a day’s work, the US boss of Titan, which was lined up to take over part of the Goodyear plant at the centre of the dispute, was vocally appalled by what had happened.

“In the United States we’d call that a kidnapping,” he told radio station Europe 1.

“These people should be arrested and prosecuted. It’s a very serious crime, you could get life in prison. But in France, your government does nothing, it seems crazy.”

He’s got form on France, though, in 2014 describing French labour laws as “stupid” adding: “It’s the dumbest thing in the world. France should just become communist and then when it goes all bad like Russia did, then maybe you’d have a chance.”

In 2013, he wrote a letter to the French industrial renewal minister calling French workers lazy and overpaid.

“They get one hour for breaks and lunch, talk for three and work for three. I told this to the French union workers to their faces. They told me that’s the French way!” wrote Taylor.

The minister at the time, Arnaud Montebourg, hit back, telling Taylor: “Your extremist insults display a perfect ignorance of what our country is about.”

“Be assured that you can count on me to inspect your tyre imports with a redoubled zeal,” he added.

But isn’t it illegal?

Yes, we should make it clear that kidnapping or assaulting people is illegal in France, even if that person is your boss and you hate them.

Holding a person captive for seven days or less could earn a perpetrator five years in prison and a €75,000 fine, while assault can also be punished with fines and prison depending on the severity.

Eight Goodyear employees were taken to court over their ‘boss-napping’ and given nine-month jail terms.

In the case of the attack on Air France bosses, three people were prosecuted and handed suspended prison sentences.