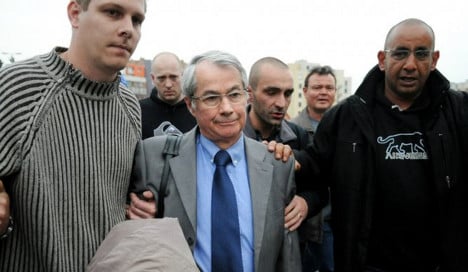 Maurice Petit, an exec from American company Caterpillar is lead away by workers in 2009. Photo: AFP

Nobody does worker disputes quite like the French do.

In fact they are famous around the world for taking militant action, whether it's street protests, blockading roads and ports and burning tyres.

But what French workers are renowned for more than anything is targeting their bosses personally when it comes to trying to stave off job cuts or fight for better severance packages. When, after five years of lengthy negotiations, the executives of Goodyear's French unit announced plans to close the Amiens plant, putting 1, 173 jobs at risk, the workers decided to hold two executives hostage in the building for two days.

The union leader, Michael Wamen, who led the boss-napping and gained lots of media attention for the stunt, said they would not be released until ‘we have a guarantee that real negotiations will start on bonuses and severance packages for all employees.”

While local authorities reported burning tyres outside the building, Mr Wamen said ‘The show is only just beginning’.

The head of US tyre firm Titan International Maurice Taylor, who has offered to partially take over the Goodyear plant, told Europe 1 radio: “In the United States, that would be called a kidnapping. These people would be arrested. It's a very serious crime, you risk life in prison.” In a spate of 10 bossnappings across 2009, attributed to the damaging effects on industry of the 2008 recession, Luc Rousselet the boss at 3M in the town of Pithiviers was taken hostage in March in a dispute over severance pay.

The detention came less than two weeks after workers held the boss of Sony France hostage overnight before freeing him after he agreed to reopen talks on their pay-off when the factory closed.

Workers claimed that their actions were not intended to be aggressive, but were rather their ‘only currency’ – and to prove it they provided a meal of moules frites to their boss while he was held in the building.

As is often the case with boss-napping, it proved an effective tactic. After letting the manager go to pursue their grievances in court, an appeals court ruled in their favour, ordering 3M to pay €800,000 to 110 laid-off workers. In the third bossnapping of the month of March 2009, four executives of the American company Caterpillar, including Maurice Petit (photo above) were held hostage for 24 hours in the management headquarters in Grenoble.

Over a quarter of the 2,500 workers were to lose their jobs and the workers were asking for a minimum redundancy pay-out of €30,000 per person.

It seems there were no hard feelings about the incident, as the company upped its total severance package from €48.5 million to €50 million, amounting to an average €80,000 ($108,000) per worker, further proving the effectiveness of a tactic which seeks to protect France’s long history of worker’s rights. Workers at a bankrupt auto-parts factory in central France went a step further by booby-trapping the building and threatening to blow it up, if it’s two main customers, Renault and PAS Peugeot Citroen, didn’t fork out $14 million dollars to laid-off workers.

Unions placed gas canisters throughout the factory in the town of Chatellerault, southeast of Paris, and threatened to detonate them on July 31st if they did not pay $42,000 to each of its 336 employees.

Once again, no charges were made against the workers and opinion polls showed sympathy for their cause. Government officials helped negotiate a settlement in which workers received a severance package of around €30,000.

In yet another incident of bossnapping in the year 2009, this hostage situation was the first to involve British Managers.

The human resources manager, the finance director and the European operations director were all held overnight in the small plant in Bellegarde at the foothills of the French Alps.

One of the hostages described the bossnapping as ‘a non-aggressive action’, with the unions providing dinner for the managers while they were there.

After one night the managers were released in order to hold talks with local government offices about the closure.

And it's not just workers who kidnap bosses: In 2011, a group of parents held 5 members of staff hostage at a private Catholic primary school in the town of Berre l’Etang in the region of Bouches-du-Rhone- all to get a teacher fired.

Parents complained that they were extremely worried about the progress of the class, and they thought their children were in danger.

They said that the situation was out of control, everyone shouts in the classroom, the children cry all day, one of the children doesn’t want to attend the school anymore.

They took the hostages in the hope that things would change, saying that ‘we have taken the teachers hostage, but our children have been held hostage since September.’

Perhaps ‘teachernapping’ will become as popular as bossnapping, as the firing of the teacher was put into immediate effect by the authorities.