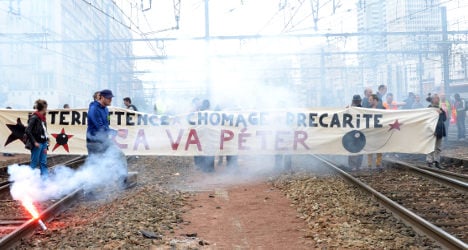 Where does this French love for strikes come from and do they really deserve their reputation for downing tools? Photo: AFP

So are the French really the world’s biggest strikers?

Yes and no argues French historian Stéphane Sirot. “It’s part of the character of France to have these big social movements at a national level, that can last a long time,” he says. These movements are highly visible, can cause major disruption and are covered widely by the media both at home and abroad, which only adds to France’s militant reputation, says Sirot, who specializes in strikes and the trade union movement.

And when the French do strike, they also protest, loudly. It's part of the long French tradition of taking to the streets, Sirot says. The protests can be violent, which only increases the media attention and fuels the reputation.

But when you look at the statistics of the number of days lost to strikes in each country over the last 100 years, Sirot says, then France is generally in the middle of the table. Other experts in the field also claim the number of days lost to strikes in France has decreased notably since the 1970s. Those kinds of  stats are often used to debunk the myth that the French spend their lives on strike, but others have doubted the accuracy of these figures which often put countries like Denmark and Norway at the top of those rankings.

French website Alternatives-économiques claims they do not account for all public-sector strikes in France and many days lost to strike in the private sector are also not being accounted for. In reality, it argues, France sees more strikes each year than other developed European countries including the UK, Germany and Sweden, and they have been on the rise in recent years.

Kurt Vandale from the European Trade Union Institute tells The Local that while Greece and Spain have topped the tables for most strike days in recent years, since 2009 France has been at the top of the rankings.

So, while the stats may not be conclusive, we can safely say the reputation is at least merited.

So why are the French up for going on strike so much?

The main reason seems to focus around the historic relationship between bosses and employees. The historian Sirot says that while in other northern European countries, strikes tend to follow failed negotiations, in France, strike action normally precedes negotiations or runs alongside them.

So some unions will flex their muscles, call a strike, hold a public protest and then the talks can begin. More often than not the government will hold firm and refuse to negotiate while the strike is on, as seen in this week’s rail walk-out.

It's also worth noting that the French general public accept strikes as a necessary evil to improve workers' rights. Whereas in the UK strikers are often blasted by an unsympathetic general public, in France the general feeling is that it is for the greater good. Although tempers do boil over sometimes as the photo below suggests. Are the strikes all down to the trade unions then?

Here’s an interesting stat from Sirot: France is the country with the highest number of trade unions but the lowest percentage of union membership. In France the number of workers in unions stands at around 8 percent whereas the average in the rest of Europe is around 25 percent.

But just because they are not in a union does not mean they are less likely to strike. Sirot points out that French workers won the right to strike in 1864, 20 years before they were allowed to unionize, which engineered a culture of conflict.

But the trade unions do play a role. Competition between them can be fierce. The more radical unions like the CGT, (which have much more of a militant background than German or Scandinavian trade unions) will want to flex their muscles and try to win support from frustrated workers so they will be more eager to call a strike.

Guy Groux, head of research at French think tank CNRS also points out in an interview with Slate magazine that the lack of collective bargaining or negotiation that exists in other countries but not in France is another reason why there may be more strikes in France.

Another difference Kurt Vandale points out is that in other countries once negotiations take place and are signed off then unions cannot call a strike until the next round of talks.

How do all these strikes affect France’s standing abroad?

The reputation of France as being a nation of strikers can be costly when it comes to business and foreign investors, Sirot says.

“But we need to make clear to them that it is mainly just the public sector which is affected. If they look at the private sector, they will see that there’s very little conflict,” he says. Although Sirot admits that when there is a dispute in the private sector it can be much more militant.