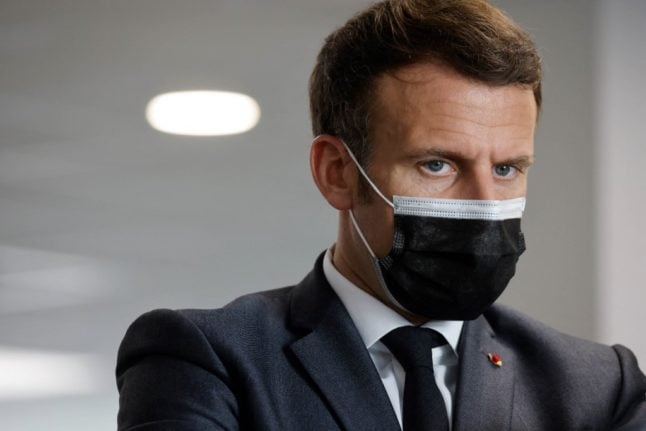 French President Emmanuel Macron has been hoping that the anti-Covid vaccine could be the game changer that would allow France to avoid a third nationwide lockdown. Photo: Ludovic MARIN / AFP

The president’s Elysée Palace confirmed the TV appearance will take place on Wednesday evening, after a meeting of the Defence Council on Wednesday morning, which will examine which new measures are needed to halt the exponential rise in Covid cases.

Speaking after the Defence Council meeting on Wednesday government spokesman Gabriel Attal said only that any new measures would be announced by Macron in his TV broadcast.

He did however add, in reply to Paris hospital chiefs who had suggested that they would soon have to start turning away patients because hospitals are so full: “France will never refuse a patient. Triage of patients is not an option, never has been and never will be.”

On Thursday, Prime Minister Jean Castex will update the French parliament on the health situation and hold a vote on any new measures.

What does this mean?

France’s first and second lockdowns were both announced in live TV appearances by the president, in contrast to lesser measures or the loosening of restrictions, which tend to be announced by Castex or Health Minister Olivier Véran.

However during the health crisis Macron has also made TV appearances in which no extra measures were announced. In an interview with the Journal du Dimanche newspaper on Sunday the president appeared to be sticking by his strategy of not imposing a third full, nationwide lockdown.

There is no doubt that the government is under pressure to act.

Covid-19 case rates are rising rapidly with average daily rates now approaching 40,000 new cases – not far short of the 50,000 a day that France saw before the second lockdown in October.

Hospitals are struggling to cope with the high number of intensive care unit patients. On Monday France had 4,974 patients admitted into intensive care units in total, more than at the peak of the second wave of the virus in autumn (4,903 on November 16th).

Nine out of 10 intensive care beds were occupied in France, according to health ministry data given to AFP (6,833 out of 7,665 in total on March 26th).

Neighbouring countries including Germany and Spain have imposed extra restrictions on arrivals from France while the UK mulls over doing the same.

Further pressure was heaped on the government over the weekend when a group of emergency doctors wrote an open letter to the Journal du Dimanche newspaper saying that Paris hospitals were so overwhelmed that they may soon have to start turning away patients.

Meanwhile French newspaper Libération’s front page on Tuesday simply says ‘What are you waiting for?’

So does this mean another nationwide lockdown?

Not necessarily, in an interview with the JDD on Sunday Macron said: “We are going to look at our present braking measures in the next few days and will take whatever decisions are needed.

“At present, nothing is decided.”

It seems unlikely that no new measures will be introduced, but they might stop short of a full, nationwide lockdown.

School closures – The head of the Paris hospitals group on Sunday called for a complete nationwide lockdown and the closure of the country’s schools.

The government has repeatedly said that closing schools would be a last resort once everything else has been tried (and schools stayed open during the second lockdown) but the prevalence of the ‘UK variant’ of the virus which seems to affect younger people more may force their hand. Tighter restrictions in schools were introduced last week, with classes now closing after one confirmed Covid case, as opposed to three cases previously.

On Wednesday morning BFM TV claimed the president was now seriously considering closing schools nationwide, according to its sources at the Elysée while Paris mayor Anne Hidalgo has also called for the closure of schools.

Regional lockdowns – There are still wide regional variations in case numbers in France, with incidence rates in the Paris suburb of Seine-Saint-Denis at a sky high 781.2 per 100,000 people, according to the latest public health data, while in the Brittany département of Finistère it is 85.3 – the France average is 370.6 per 100,000 people.

Nineteen areas of France have already been placed on ‘lockdown light’ with the closure of non-essential shops and a ban on inter-regional travel, but with considerably more relaxed rules around trips out of the home, exercising and socialising many fear that these restrictions are too loose to be effective.

Travel bans – At the start of the month France relaxed its international travel restrictions, meaning that travellers from seven non-EU countries – including the UK, Australia and New Zealand – no longer have to prove ‘essential reasons’ to travel to France. However as neighbours begin to impose tighter restrictions on travellers from France, the borders could once again be closed.

There is also the possibility of a ban on travel between regions in France. At present people who live in ‘lockdown light’ zones are not allowed to travel to another region – and checks on travellers were stepped up on Friday – but this could be extended to the whole country, especially ahead of the Easter holiday over the weekend.

Short lockdown – the other option is for the government to impose a strict lockdown along the model of the spring restrictions – stay-at-home order, closure of all schools, attestations needed for all trips out – for a short time in the hopes it will bring the hospital situation under control.

The present situation in France could briefly be summed up as a race between vaccines and variants, with variants so far in the lead.

However the French vaccine programme, desperately slow at the beginning, has in recent weeks dramatically sped up and is now vaccinating around 400,000 people a day – including at weekends.

With the programme set to shift up another gear in mid April, when a large delivery of Pfizer vaccines is expected, the president’s strategy seems to be to put in just enough restrictions to keep the situation in hospitals under control until the ‘vaccine effect’ can kick in.

There is also a political element to the calculations as Macron has staked political capital on his decision not to lock down in January or February, when many of France’s neighbours did.

Véran, on the other hand, is reported to favour another lockdown, although Elysée insiders were keen to play down reports of a clash, telling Le Parisien: “There is no difference of opinion between Olivier Véran and Emmanuel Macron. It is normal that, during the Defence Councils, which meet at the Elysée and which are collegial bodies, each one brings back information from the field and that he gives his opinion accordingly. Olivier Véran and the others. The collective is a reality.”