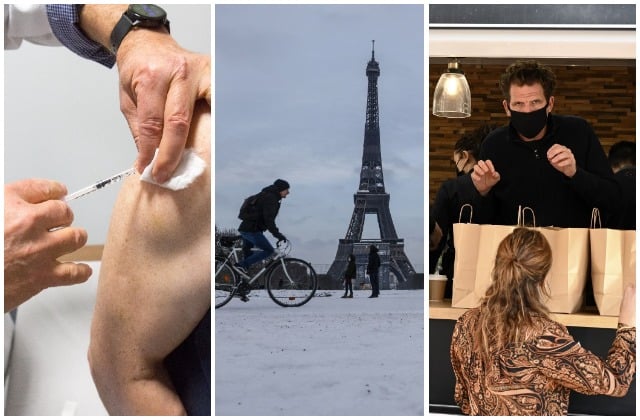 While the French government has decided against imposing a third national lockdown for the time being, it has issued local restrictions in areas where Covid rates soar.

Twenty-three départements are on “heightened surveillance” after Prime Minister Jean Castex added another three to the list during Thursday’s Covid press conference, where he also extended a weekend lockdown to the entire département of Pas-de-Calais in northern France.

The cities of Dunkirk, Nice and other towns in the French Riviera already began their weekend lockdowns last weekend, and it will remain in place for at least the next two weeks. All areas concerned by the weekend lockdown have strict rules limiting outings between 6pm on Friday (when the evening curfew enters into effect) to 6am on Monday.

Castex stressed that a further flare-up in Covid numbers in areas of concern could result in further restrictions in the coming days or weeks.

The next stage of the vaccine rollout

The government has extended its Covid vaccine programme to include 65-74-year-olds with underlying health issues such as diabetes, hypertension, or a BMI or 30 or above. Alongside 50-64-year-old with the same health problems this group can access their vaccine through their GP.

READ ALSO: When will you be eligible for the Covid vaccine in France?

READ ALSO: How to get a Covid vaccine at the pharmacy in France

Household gas prices decreased steadily in 2020 in France until August, and since then they have been rising nearly every month.

The popular bike repair scheme offering €50 subsidies for all cyclists in France, initially set to end in December 2020, will be in place until March 31st.

The scheme is part of the Coup de Pouce Vélo launched by the ministry for ecological transition.

UPDATE: How to get €50 to cover the cost of your bike repairs in France

According the legislation passed by parliament the EU members states that decide to stay on summer time will put their clocks forward for the final time in March 2021.

In France, the overwhelming view is that the country should stay on summer time. But EU countries still haven’t agreed on how to do this to avoid clashes between neighbouring countries and the Covid-19 pandemic has paused the debate on this issue.

The energy labels for electrical appliances are changing. The EU countries are getting rid of the labels A+, A++ and A+++. Instead, they will in future only range from G, for less environmentally friendly appliances, to A for very energy-efficient models.

“This scale is stricter and designed so that very few products are initially able to achieve the “A” rating, leaving space for more efficient products to be included in the future,” the EU Commission said on its website.

A QR code will feature on the top right of the new labels. By scanning the QR-code, consumers can find additional information about the product model and easily compare different labels. The price of some cigarette brands will rise by €0.10, though some (like the brand Gauloises blondes) drop by €0.10. France’s long term goal has been to make smoking a more expensive habit, and all 20-packs now cost around €10 following months of small price hikes.

Students have until March 15th to apply for a grant, student housing and funding for the 2021-2022 academic year. The application can be submitted online, even if you’re still missing details about your situation (such as exam results or admission).

Children go back to school after February holidays

The February holidays are different throughout the country.

READ ALSO: February holidays in France – what are the rules and the official advice?

The reduction in payments to people on reduced hours due to the pandemic that was supposed to apply from February 1st has been postponed to March 1st.

Employees who benefit from the chômage partiel or furlough scheme currently receive an indemnity amount which is equivalent to 84 percent of their net salary.

Initially the level of compensation was going to be lowered to 72 percent of the net salary on February 1st, but the government decided to push back the date to March 1st.

READ ALSO: What you need to know about France’s crisis unemployment scheme

Restaurant tickets issued to employees have been extended, meaning those in possession of vouchers that expired in 2020 will be able to use them until August 31st.

The vouchers – given to many employees in France whose company does not have a canteen – are also valid for the “click and collect” take away scheme widely employed by restaurants, though capped at €38 per day.

On March 1st the government added 30,000 internship opportunities to the online platform 1jeune1solution where people under 26 in France may apply for jobs.

Launched last summer, the platform aims to reduce youth unemployment, a long-standing problem in France made worse by the pandemic. These new internships are flexible, possible to do while working remotely, with looser rules regulating the start and end dates.