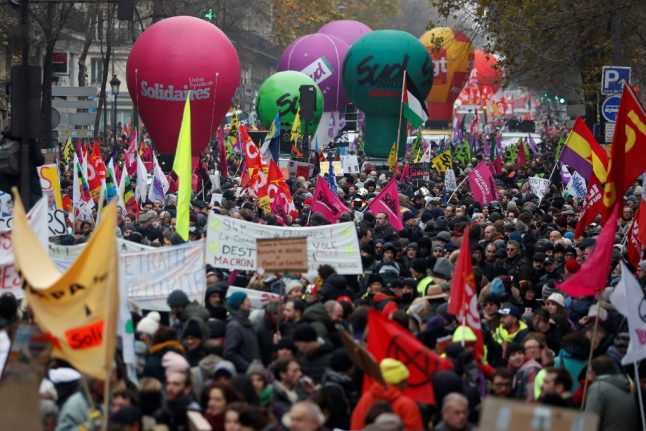 Unions say striking is their only option. Photo: AFP

Their goal is to force the government to drop a controversial new pension reform that they believe will leave many people having to work longer for lower monthly pensions.

The strike entered its second day on Friday with unions warning they are prepared to continue their fight until Christmas if the government does not respond to their concerns. Those worries centre around changes to France's complicated pension system.

Currently, there are 42 different systems, so the age you can retire and the level of pension you get depends on where you work.

For example SNCF train drivers and Metro drivers can retire at 50 and 52 respectively, with the average employee of RATP (which runs the Paris public transport network) getting a monthly pension of €3,705.

In comparison, anyone who doesn't enjoy a 'special regime' for pensions – generally people who work in the private sector – can retire at 62 – the legal age of retirement in France and get an average pension of between €1,260 and €1,460 a month.

The difference is mostly due to how pensions are calculated. For the majority of people in the private sector their pension is calculated based on their salary over 25 years, but some special regimes calculate pensions based just on the salary of the employee during their final six months of work.

The reform that French President Emmanuel Macron has proposed creates one universal system so everyone's pension is calculated in the same way, taking into account the employee's whole career and introducing a points based system for pensions and potential early retirements.

Unions say this will penalise people who have been through a period of unemployment, taken a career break or started on a very low salary.

French President Emmanuel Macron referred to the strikers as “dominated by employees of big transport businesses” with “categorical demands that would penalise the society at large.”

Unsurprisingly, the unions do not agree with him.

Before the strikes began we asked some of France's biggest unions to justify bringing France to a halt. Strikes against pension reform in 1995 caused huge disruption for three weeks until the government backed down. Photo: AFP

“Striking the only means to obtain social progress in this country,” said Benjamin Amar, political spokesman for the CGT.

“You have to use le bras de fer (strong-arming, further explained here).”

The CGT was the leading trade union during the 1995 strikes, when Jacques Chirac's government tried to push through another unpopular pension reform. After three weeks, the government abandoned the reform.

The current reform, Amar said, would have “catastrophic social consequences” for French workers.

“Macron is the president of the patronat (the employers). The reform is a gift in disguise to them,” he said.

“Believe me, we would prefer to sit down around a table if we could.

“No one likes striking. It’s tough on our wallets, our physical and mental health. But we need to mobilise to defend our rights.”

“British workers know what we’re talking about. [Former British Prime Minister Margaret] Thatcher broke down the unions, and who is defending their rights now? No one.”

So how long is the CGT prepared to keep the strong-arming going?

“We’re not talking numbers. This is not math, it’s a deep-set anger. Our workers are angry,” he said, adding: “And I prefer that they express their anger together with us rather than through the far-right, like in other countries.” FO was created in 1948, following an internal split in the CGT. Historically the FO members have been skeptical of the Communist Party’s influence on the CGT. FO is today France’s third largest union, behind CGT and CFDT.

“This is not just about defending the special regimes,” said FO's General Secretary Yves Veyrier.

“We talk a lot about the rail workers, but in reality the reform will negatively impact the French population as a whole.”

Veyrier is referring to that the reform will change the way pensions are calculated for everyone, both public and private sector workers.

“We have been telling the government this for two years now, but no one is listening,” Veyrier said.

But does this justify paralysing the whole country?

“We don't have a choice. It's not like we enjoy striking,” he said.

A lot of the workers worry about losing their salaries, Veyrier said, which could impact how long they can keep the strike going.

“But we won’t go home on December 5th saying ‘well that was a good strike, shame we didn't achieve anything',” he said. “I’m afraid this is the only option we have,” said Dominique Corona, chief pension negotiator for UNSA, the umbrella union representing both public and private unions.

Among UNSA's members is one of the country's largest teachers’ unions, and a union representing parts of the RATP transport system (UNSA-RATP).

“The government keeps saying they don’t want teachers to lose money, but they don’t say how they will prevent it,” Corona said.

In an echo of FO's Veyrier, Corona said the government is claiming to be looking for solutions, but isn’t coming up with anything substantial.

“This strike is not about punishing the government, it's about finding solutions to improve the way France works.”

But is paralysing the whole country really the right strategy for achieving this?

“This is France,” Corona said.

“I would much rather live in a country where we didn’t have to pull a strike to get answers from the government.”

So how long are they prepared to keep the strike going?

“Unless of course the government comes up with something before then. In that case, we won't strike.” Joining in on the strike is also France's largest teacher's union.

“This not something we do for fun. We would much rather be in class,” said Francette Popineau, Co-General Secretary and spokesperson of the union.

Referring to the reform as “monstrous” Popineau said she feared it would push French teachers into poverty.

She sees the President as detached from the French population  “I don’t think he understands,” she said.

“He’s never been elected before, never been mayor. He didn’t have to look the people he ruled over in the eye at the bakery every morning.”

But, again, is that good enough reason to disrupt the whole country?

“The problem in France is that our system is completely vertical. All decisions come from above,” Popineau said.

“Striking is a right we use when there isn't any dialogue. It's a last resort.”

The teachers' union is undecided as to whether or not they will continue the strike after December 5th.

“Obviously it’s a complicated situation for us seeing as we are responsible for the children,” Popineau said, adding that she hopes the government will come up with a solution on the 5th.

“But we are ready to stay on the streets if necessary,” she said.

What are the rules? Does France have a hijab ban?

No, France does not have a ban on hijabs in public spaces. However, the rules differ when it comes to headscarves and full-face coverings and this can be confusing because both the full-face veil and the Muslim headscarf are often referred to a voile in French.

In 2010, the country brought in a complete ban on clothing that includes full-face coverings – including the burka and niqab. These cannot be worn in any public space in France, at risk of a €150 fine.

The hijab or headscarf, however, is completely legal in public spaces including shops, cafés and the streets and it’s common to see women wearing them, especially in certain areas of the big cities like Paris.

However, that doesn’t mean there is no restriction on women’s freedom to wear the Muslim headscarf.

In line with France’s laws on laïcité (secularism) it is forbidden to wear overt symbols of religion – including the Muslim headscarf – in government buildings, including schools and universities (with the exception of visitors).

Public officials such as teachers, firefighters or police officers are also barred from wearing any overt symbol of their religion while they are at work.

Burkinis are also subject to certain rules. They are not allowed in public swimming pools in France where there are strict regulations regarding dress (Speedos only for men and compulsory swimming caps), but they are allowed on beaches and in other public spaces.

READ MORE: Burkini: Why is the French interior minister getting involved in women’s swimwear?

This became a source of controversy during the summer of 2022, when Grenoble challenged the ban on the full-body swimsuit by relaxing its rules on the swimwear permitted in public pools.

In response to the challenge, France’s highest administrative court voted to uphold the countrywide ban in June.

What about in athletics?

Some federations, such as the French Football Federation, have banned players from wearing the hijab, along with other “ostentatious” religious symbols such as the Jewish kippa.

Other sports, such as handball and rugby, have a more open position.

Are there plans to change these rules?

Currently, there are no government plans to reverse the ban on full-face coverings including the burka and niqab or to allow the symbols of religion in public buildings, like schools.

There have been attempts to change the current legal framework on the headscarf, however.

In 2021, Senators proposed an to the government’s “anti-separatism bill” that would ban girls under 18 wearing a hijab in public. Several other amendments also targeted Muslim women – such as banning mums from wearing the hijab when accompanying school trips – however these were all defeated in the Assemblée nationale and therefore did not become law.

Are the rules followed?

The rules around the niqab are generally followed and it has become quite rare in France.

However sociologist Agnès De Féo, believes that in the years following its ban, the full-face covering became more popular, rather than less.

She wrote that “the law had an incentive effect: it incited women to transgress the ban by embracing the prohibited object. Prohibition made the niqab more desirable and created a craze among some young women to defy the law.”

The rules around the wearing the headscarf in public buildings are generally respected, but it’s not uncommon for rules around any form of Muslim dress to be over-zealously interpreted – sometimes by accident, sometimes with a cynical political intent.

One key example was in 2019, when Julien Odoul, a member of Marine Le Pen’s National Rally (RN) party, caused widespread outrage after posting a video of himself confronting a headscarf-wearing woman who accompanied students on a field trip.

He cited “secular principles” – arguing that the headscarf’s ban in schools should also extend into school trips.

In response, the country’s Education Minister at the time, Jean-Michel Blanquer, clarified that that “the law does not prohibit women wearing headscarves to accompany children.”

There was also controversy at election time over candidates who appeared on posters wearing the hijab, although again this is perfectly legal and doe snot contravene secular principles.