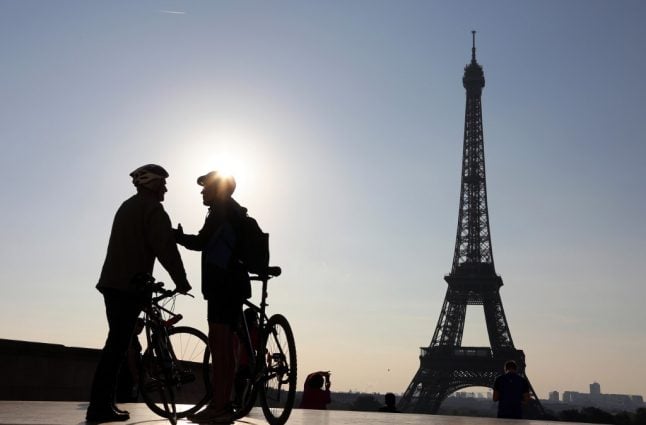 More than 200,000 Parisians rode their bikes on October 13th, a milestone figure that’s available thanks to the newly installed counter meters (unveiled on September 4th) keeping count on this growing trend as Paris pushes to ditch the cars and go green.

“On average the number of bicycles being used increased by 54 percent between September 2018 and September 2019 in 56 sites equipped with meters,” said Christophe Najdovski ,deputy Paris mayor in charge of transport.

“The main rise in usage has been along Rue Lafayette (53 percent) in the 9th and 10 arrondissement, around Quai François Mauriac in the 13th (66 percent) and on rue Voltaire in the 11th (82 percent).

Paris transport authorities say “vélotaf” – which combines the words for bike in French and the slang for work in reference to commuting by bike – has become the most common reason for Parisians to get on their bikes.

So why do so many Parisians now prefer to cycle rather than drive their own cars or hop on public transport? And why is the cycling trend likely to spread even further?

More bike lanes to be unveiled

Paris authorities are investing in building new cycle paths and improving the existing ones across the city.

According to the city’s Observatoire du Plan Vélo (Cycle Plan Observatory), the most anticipated routes are on rue Rivoli between Bastille and la Concorde (about 4 km long), the under-construction bike lane between Châtelet and Gare d l’Est (about 2 km), a 2.5 km lane on rue Lecourbe, a 3km one on rue Voltaire and the one running between Gare de l'Est and Stalingrad (about 1 km in length).

There’s also the new RER V cycle network, named after the RER train networks that links Paris and the suburbs, which aims to expand the cycle paths so that cycling to work is a viable option for people who live outside the Paris ring road.

As all too often cycle routes stop at a ring road, the collective behind the scheme envisions “large, comfortable lanes” so that cyclists can “ride without doubt, without danger and over long distances”.

So far, 37 percent of Paris’s new bike lane network has been built. Paris mayor Anne Hidalgo’s initial aim was to double the number of cycle lanes in Paris from 700km to 1,400km by 2020.

Those plans were however revised down to around 1,000km of lanes to be finalised by next year's spring local elections.

Despite the promising shift towards cycling in the capital, only 3 out of every 100 workers in France commute by bike, with commuting by car being the primary means of transport for 70 percent of the working population.

The French government’s mission is to triple the number of cycling commuters in France in the next five years, up to 9 percent by 2024.

In order to achieve this the State will give a total of €350 million to French municipalities that “have bike paths interrupted by other road infrastructure”, such as ring roads, slip roads or any other road meant for bigger vehicles and which could pose a danger to cyclists.

These black and white “totems” as they’re referred to in the French press allow city authorities to keep track of all the people choosing to move around Paris by bike as well as the impact it has on improving traffic and air pollution in the city.

The one positive outcome of September’s strike-induced travel misery in Paris was the huge number of commuters who took to their bikes instead.

Even the city’s trouble-ridden Vélib bike share scheme managed to record an outstanding 170,000 rides on one of the days of the strike.

With the possibility of more transport strikes in December, commuters are likely to migrate in greater numbers to a means of transport they can rely on.