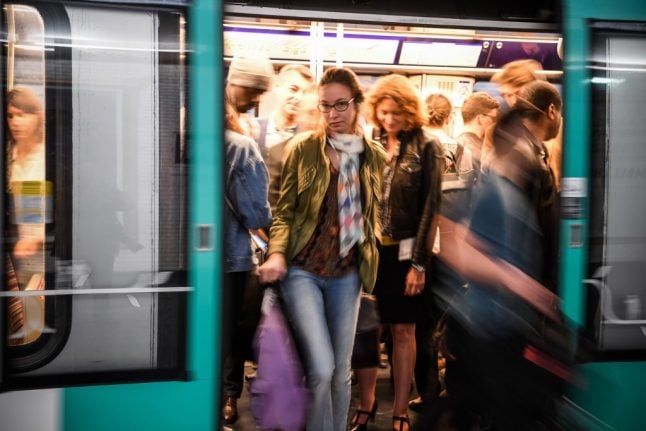 The protests are over a proposed radical reform of France's pension system to standardise the system and do away with a raft of special regimes.

They are predicted to bring the worst chaos to the city since 2007 – when another attempt at pension reform sparked chaos.

Massive crowds waited on the platforms of the few lines still working and officials counted some 291km of traffic backups during the morning rush hour, double normal levels.

The city's burgeoning cycle lane system was seeing a surge in traffic as people pulled out bikes to get to work.

Die Sokhanadu, 25, was stuck at a station on line 12, trying to get to his job working on the restoration of the Notre-Dame cathedral in the heart of the city.

“If the Metro doesn't start running, I'm going to have to head home,” he told AFP.

Others worried about their evening commutes, with the RATP warning that only lines 1 and 14 — the only two which function autonomously, without drivers – would be operating after 8pm.

At rush hour on Friday morning the pavements around Paris were packed with people heading to work by foot.

“I've seen so many people walking in Paris before,” said Beatrice who gave up on waiting for a Metro train and headed off to find a bike.

With some Metro closed and other just operating a reduced service in rush hour the roads were also busy with commuters heading to work by bike or by electric scooter.

On Line 7 there were trains every 10 to 15 minutes at rush hour before the service closed completely at 9.30am. But passengers struggled to get on the already crammed trains that did arrive as the video below from Louis Blanc Metro station shows.

It was the same story on the buses where passengers found it impossible to board.

“I waited 25 minutes for a bus and then gave up and tried the Metro,” Malika, a teacher who needed to get across Paris told The Local. “I don't even know  if I'll get on.

“They have a right to strike of course and I support them, but it's a mess for everyone else.”

Buses in Paris like the Metro trains are packed to the rafters this morning. You will struggle to get on. We fully recommend walking everyone.m, if you can. It's set to be a beautiful day too.#greveratp #parisstrike pic.twitter.com/iKxVtRNXWo

Thousands of tourists were also caught up in the strike, with many having no warning about the industrial action.

“The guy in our hotel mentioned their might be a problem but not as bad as this,” one Londoner waiting for the Metro told The Local. “I guess this is all part of the experience of visiting France.”

Two American visitors next to him on the platform gave up waiting for a train and decided to walk to their cooking class near Notre Dame. The disruption is expected to be the worst since the pension protests of 2007. Photo: AFP

The three main RATP labour unions have called the strike “a shot across the bow” against President Emmanuel Macron's pledge to implement a “universal” pension system that would do away with dozens of separate schemes for different professions.

France's state auditor, the Cour des Comptes, said the average retirement age for RATP workers in 2017 was 55.7, compared with 63 years for most French workers.

The three main RATP labour unions have called the strike “a shot across the bow” against the overhaul, the latest element in Macron's push to bolster France's economy and cut spending.

“It's not a strike by the privileged few. It's a strike by employees saying 'We want to retire at a reasonable age with a reasonable pension',” Philippe Martinez, head of the CGT union, told France Info radio.

The industrial action was set to be the biggest metro strike since 2007, when former president Nicolas Sarkozy pushed through a pension reform that moved back the retirement age for most public workers.

A lot more people on foot/bike/electric scooter in Paris this morning due to the transport strike. Some still braving the Metro line 7 before it closes at 9.30 but not many trains running. Passengers packed in like 'sardines'. #greveratp pic.twitter.com/H9SOX1fQnW

During his 2017 presidential campaign, Macron pledged not to touch the current legal retirement age of 62 for most workers.

But Jean-Paul Delevoye, who is leading the reform project, has suggested a points system that would effectively wipe out the more advantageous pensions for a wide range of professions, including those for sailors, notaries and even Paris Opera workers.

More controversially, Delevoye has also proposed making a full pension available only from 64 — people who retire earlier would have to accept a lower pension: five percent less for someone who stops working at 63, for example.

“We're going to construct a truly universal system where every euro paid in will provide the same rights for everyone, whether a labourer, a shop owner, a researcher, a farmer, a civil servant, a doctor or an entrepreneur,” Prime Minister Edouard Philippe said in a speech on Thursday.

Consultations are currently being held with labour unions, and the government wants parliament to vote on the project next spring.

But the government is likely to face further opposition in coming weeks, with lawyers, airline pilots and stewards, and medical workers calling a strike for Monday.