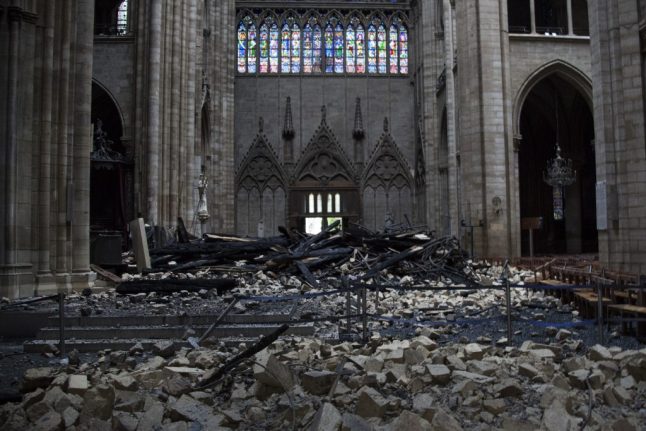 Inside Notre-Dame the day after the devastating blaze. Photo: AFP

On Wednesday site engineers and architects were beginning a second day of assessing the damage and making the building safe, but attention had already turned towards rebuilding the iconic Paris landmark.

As the world woke up on Tuesday to news of the destruction, donations and messages of support flooded into France from around the globe. The blaze engulfed the roof of the cathedral. Photo: AFP

Two French billionaires pledged a total of €200 million towards the rebuilding fund.

The Hungarian city of Szeged said on Tuesday that it was donating €10,000 towards the rebuilding of the, recalling the help it received from the French capital after a devastating flood in 1879.

“One hundred and forty years ago Paris provided help to rebuild Szeged after its great flood, now in the spirit of European solidarity Szeged is helping Paris,” a statement from the city's municipality said.

Other donations from around the world included a traditional kingdom in Ivory Coast.

Amon N'Douffou V, king of Sanwi in southeastern Ivory Coast, told AFP: “I am in full consultation with my elders – we are going to make a donation for the rebuilding of this monument.”

“I couldn't get to sleep because I was so disturbed by the pictures” of the fire, he said.

“This cathedral represents a strong bond between my kingdom and France.”

In 1687, after French traders had established a foothold in the kingdom, the king sent a son named Aniaba, aged about 15, to Paris as a token of his bona fides.

The boy was taken to Notre-Dame where the sight of the cathedral is said to have driven him to religious ecstasy.

Corporate contributions are expected to climb, with blue-chip firms like Vinci, Michelin and BNP Paribas also saying they were weighing how to participate.

Air France said it would offer free flights to experts brought in to help with Notre-Dame's renovation and Apple also said it would contribute.

Work is continuing on the site on Wednesday but it now known that most of the roof has been destroyed. The cathedral's steeple collapses at the height of the blaze and an unknown number of artifacts and paintings have been lost.

The main organ, which had close to 8,000 pipes, has also suffered damage.

But the cathedral's walls, bell towers and the most famous circular stained-glass windows at France's most visited tourist attraction remain intact.

Although many experts are predicting that the restoration will take decades, French president Emmanuel Macron said he wanted to have it finished in five years – in time for the Paris Olympics in 2024.