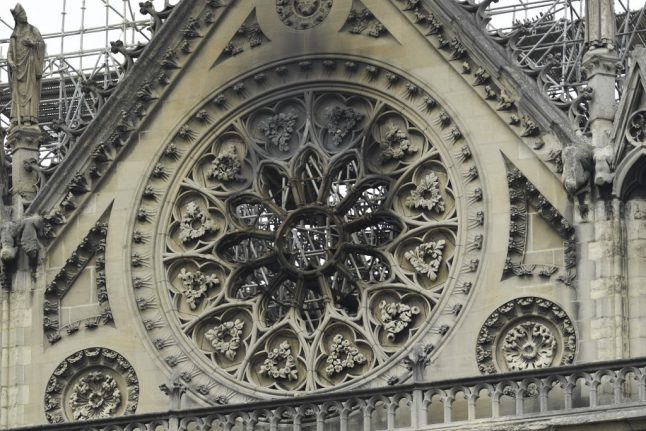 UPDATE: CLICK HERE for the latest on the investigation into the cause of the fire

The immediate efforts of the 400 fire fighters who descended on the cathedral were spent trying to tackle the blaze in the historic heart of Paris.

There efforts were hampered by everything from heavy traffic around the historic site in the heart of Paris to the difficulty in accessing the raging fire high up in the roof of the building. Firefighters perched high on numerous ladders could be seen spraying gallons of water onto blaze, seemingly in vain.

French Prime Minister Edouard Philippe said “heroic” firefighters were battling to save what they could.

But questions soon began to be asked about the cause.

What do we know about how the fire broke out?
The fire started in the attic of the Cathedral at around 18:50 local time in Paris and within minutes images and videos of the blaze were being shared around the world.
A spokesman for the Cathedral reported that a fire alarm went off almost immediately and they instantly recognised it because they had practised a fire drill just days before. Smoke could be seen immediately bellowing from the attic.
The cause of the blaze was not immediately confirmed but the cathedral had been undergoing intense restoration work to help the 850-year-old gothic masterpiece better deal with the tests of time. As seen in the photos the roof of the building was surrounded in scaffolding.
READ ALSO: The cathedral had been undergoing intense restoration work which last week saw statues lifted from the top of the cathedral.
Built between the years 1163 and 1345, Notre-Dame is one of the most popular tourist sites in Paris, drawing around 13 million people every year.
The spire, like the rest of the gothic edifice, had been undergoing the 11-million-euro ($12.4-million) overhaul financed by the French state to repair damage inflicted by time, pollution and the weather.

The fire service did say early on that the blaze could be “potentially linked” to ongoing renovations.

However reports in the French media said there wasn't any work taking place at the time the blaze began because workmen had finished for the day.
A spokesman for the Cathedral said: “At this moment we don't know how the fire started. There shouldn't have been any workmen on the site because they stop between 17:00 and 17:30.
Police in Paris have launched an investigation into the cause of the fire and the city's prosecutor Remy Heitz was due to make a statement later on Monday evening, but his initial comment was that it was too early to determine the cause.
There was no suggestion on Monday evening that the cause of the blaze was a criminal act and the investigation was said to be focussing on an “involuntary” cause.
At around 23:30 on Monday prosecutors said their preliminary investigation leads them to believe the blaze was started accidentally.
Speaking from the scene government Minister Laurent Nunez said: “Everything will be put in place to determine the origin of the fire,” but added that the priority at that moment was to let firefighters do their work.
By Tuesday morning the Paris prosecutor confirmed that the blaze was being treated as an accident and not as arson.
Were there any victims?
As of Monday evening there were no reported victims but the Cathedral's spokesman said they couldn't say for certain.
With workers supposed to have finished for the day it appears they were all off site by the time the fire broke out.
How did the firefighters tackle the blaze?
Some 400 firefighters from Paris and the surrounding region were dispatched to Notre-Dame to tackle the blaze.
TV images showed firefighters atop ladders pouring gallons of water onto the blaze but also onto parts of the cathedral that were not ablaze in order to try to prevent it spreading, notably the north bell tower.
Dozens of fire engines and at least 18 high-pressure aerial hoses were used to contain the blaze. Several drones and a robot were also pressed into action to assess the inferno.
As the steeple and roof collapsed in the early evening, operations had focused on containing the inferno and preventing it spreading to the two 13th-century stone towers on the western facade.
Firefighters also worked to protect the rear of the building “where the most precious artifacts are located,” the head of the Paris fire service Jean-Claude Gallet told reporters at the scene.

TV images also showed firefighters up on the balcony of part of the roof. Images later showed them enter the interior of the cathedral.

Many, including Donald Trump asked the question why a water plane or helicopter couldn't fly over Paris and drop tons of water on the fire just like in the case of forest fires. (A water plane seen in action during a forest fire. AFP)
The reality is that these planes are not geared towards dropping water on such a small area and the weight of the water dropped in all one go could cause part of the structure to collapse.
“Dumping water from a plane on this type of building would risk bringing down the whole edifice,” France's Civil Security agency wrote on Twitter.
Paris deputy mayor Emmanuel Gregoire told the BFM news channel that firefighters had entered the cathedral and had brought out some of its priceless artworks.
But they had been forced to withdraw as the flames spread rapidly through the wooden beams holding up the roof.
“At the moment, the priority is to control the blaze on the inside and to protect the facade,” he said, three hours after the fire broke out at around 18:50 local time.
“Obviously we fear the worst in terms of damage given the scale of the fire.”
What damage has the blaze caused to the Cathedral?
We know so far that the spire of the Cathedral and the roof collapsed. According to the Cathedral's spokesman “the whole frame of the roof of the Cathedral was burning”.
“The roof's frame dates from the 19th century on one side and the 13th century on the other. There's nothing left,” said the spokesman.
“We need to see whether the vault, which protects the Cathedral has been damaged or not.”
Some teams of firefighters had managed to salvage an unknown quantity of its cultural treasures, he and the head of the Paris fire service said.
The Holy Crown of Thorns and a sacred tunic worn by 13th-century French king Louis, two irreplaceable artifacts, had been rescued, the cathedral rector Patrick Chauvet said. Worryingly a spokesman for the Paris fire brigade later said they were not sure if they could stop the fire from spreading.
“We are not sure we can stop it spreading to the north bell tower. If that collapses you can imagine the damage.
The minister Laurent Nunez said at one point that the cathedral was still not safe.
There were more positive reports on Twitter however, although unconfirmed that stated the treasures and artworks stored in the cathedral had been saved.
But by about 23:00 on Monday evening the fire service said the Cathedral's main frame had been saved and the structure preserved.
He also said the two main towers had been preserved.
On Tuesday morning France's minister of culture Franck Riester said three parts of the stone vault had collapsed but that authorities were worried about the rest given that there were huge amounts of water-filled charred wood laying on top of the vault.
“It's all very fragile,” said Riester.
French president Emmanuel Macron said the worst had been avoided thanks to firefighters “although the battle is not yet totally won”.
Macron vowed that “we will rebuild Notre-Dame together”.
This article is being updated as news reports come in.