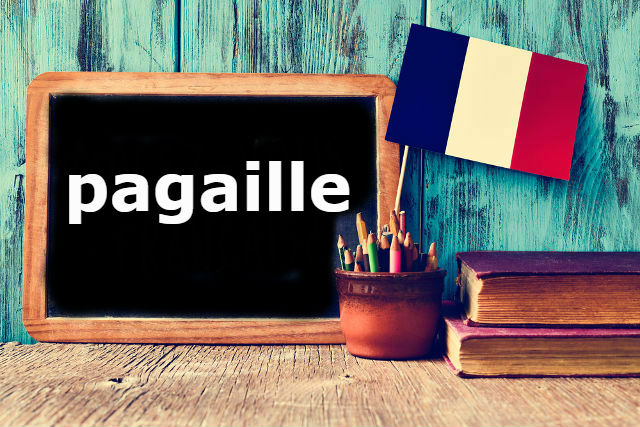 Why have we chosen the word “pagaille”?

Basically because of the number of times the word “pagaille” has been making the headlines recently.

Indeed when it came to stories about the power cut at Montparnasse train station, or the story of the Metro passengers stuck on sweltering carriages for two hours or indeed a mass brawl between two rappers and their clans at Orly airport, headline writers repeatedly opted for the word “pagaille”, which is pronounced like: pa.gaïe.

So that's why it made our French Word of the Day.

So what does “pagaille” mean exactly?

It's not slang, but it’s a colloquial term for “mess” or “shambles” or even “chaos” or “bedlam”

So when more than 3,000 passengers were stranded due to a breakdown on Line 1, Le Monde reported the incident with the headline: “Pagaille dans le Metro.”

While Google translate opts for “Trouble on the Metro” it's probably more appropriate to translate it as “chaos” here or even “mayhem”.

It can be used to describe a havoc in general though, unrelated to Metro or train breakdowns.

For example, when a shocking brawl between two French rappers took place at Orly airport in front of hundreds of stunned holidaymakers that led to flight delays, Francetvinfo reported the story saying that the fight “sème la pagaille” in other words “wreaked havoc”.

Indeed “pagaille” is often used after the verb “semer” (semer le pagaille) which means “to cause chaos” or “create mayhem”.

Pagaille can also takes on a different meaning. For example, “en pagaille” is a slang expression to describe something as being in heaps, tons, loads, etc. ”Il y en a en pagaille”, translates to, “there are loads of them”.

And strangely enough the website bab.la also translates “pagaille” as the French term for hugger mugger (those people who pretend to give you a bit of love in the street by grasping you tightly only to rifle through your pockets and steal your money).

The site also says “pagaille” in French is a slang term for a “monkey-wrench”, which is more commonly known in French as a “clé anglaise”.

A gas leak causes absolute mayhem at a shopping centre.

The snow has provoked havoc.

Other commonly used terms to describe “pagaille” in French are: désordre, chaos, bordel, but none of them seem to be used as widely, at least by headline writers.

French Word of the Day – canicule

French Word of the Day – rude