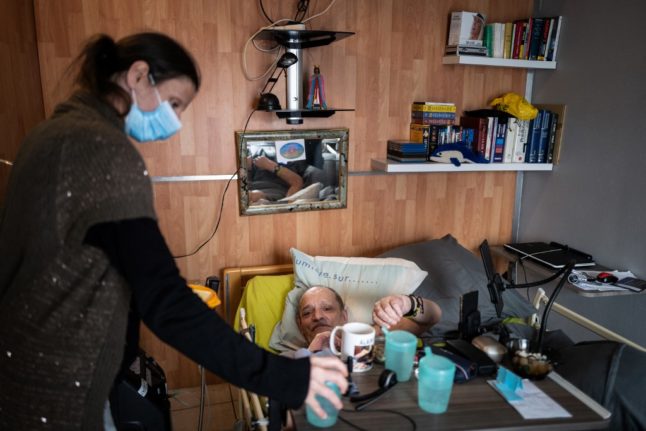 Frenchman Alain Cocq in 2021. Cocq suffers from an incurable orphan disease, wrote to President Macron asking for the right to die in 2020. (Photo by JEFF PACHOUD / AFP)

Starting on Friday, France will launch a citizen’s council on the topic of ‘the right-to-die.’

The council, which was first announced by President Emmanuel Macron in September after a meeting with actress and prominent right-to-die campaigner Line Renaud, would look into and debate key questions surrounding the possibility of changing legislation in France.

It will be made up of 150 citizens – chosen randomly – and it will run until March.

Earlier this fall, France’s national Ethics Committee for Health and Life Sciences – which considers complex ethical questions – delivered a favourable opinion on the right to die. Recent polling by the news site 20-minutes also showed that among young people (those aged 18-30), 83 percent reported being favourable to legalised assisted suicide.

France lags behind some of its European neighbours on the ‘right to die,’ and the topic has been the subject of much controversy, namely in 2019, when a top French court ordered that a paralysed patient in a vegetative state for over a decade should be allowed to die.

In 2020, a terminally ill man, Alain Cocq, wrote to French President Emmanuel Macron, asking for the right to take a drug that would allow him to die peacefully. In response, Macron told Cocq that such a request is “not currently permitted in our country.”

The issue gained momentum again when the National Ethics Committee for Health and Life Sciences delivered its opinion on the right to die in September.

The members judged that it is possible to create an “active assistance for death” if it is strictly supervised.

The CCNE exists as a French consultative body, intended to “give opinions on ethical problems and social issues” that are related to advancements in fields of biology, medicine and health. They have considered several topics, such as experimentation on humans, embryo research and consent in relation to genetic information.

After over a year of considering the legalisation of euthanasia in France, the body delivered its final judgment that “there exists a pathway to an ethical application of active assistance in dying.”

The opinion came shortly after French President Emmanuel Macron announced plans to launch a citizen’s council on the right to die, ahead of proposing new legislation in 2023.

What does French law says about the issue?

As of December 2022, French law prohibited active euthanasia and assisted suicide, as per the 2016 Claeys-Leonetti law.

These terms carry different meanings and should not be confused – euthanasia is defined as a doctor being allowed by law to end a person’s life by a painless means, as long as the person and their family agree. Assisted suicide, in contrast, is defined as a  doctor assisting an individual in taking their own life if the person requests it.

There is also passive and active euthanasia, though often when legalisation of euthanasia is discussed, it is the latter being considered. Many countries across the world allow for ‘passive’ euthanasia, which is when “medical professionals either don’t do something necessary to keep the patient alive, or when they stop doing something that is keeping the patient alive.”

Conversely, ‘active euthanasia’ is when a doctor or other party does something that causes the patient to die.

In France, patients are legally allowed to refuse or cease treatment. If they cannot express their own wishes, then the decision can be taken by a team of several doctors.

Terminally ill patients also have the right to “deep and continuous sedation.” This entails stopping current treatment, sedating the patient, and providing them with painkillers and palliative care.

Patients also have the right to leave “advance directives” – or instructions for the event where they are no longer able to express themselves. The form is signed and dated, and should be binding on doctors. It allows the patient to dictate end of life care in regard to continuing, limiting, or refusing medical treatment. France’s Conseil d’Etat reaffirmed this part of the law in 2018, which the CCNE agreed with. However, both emphasised the need to increase access to palliative care.

President Emmanuel Macron has stated that he is in “favour of moving towards the Belgian model” but his “personal opinion on the topic does not matter,” newspaper SudOuest reported.

Belgium, legalised active euthanasia in 2002, while several of France’s other neighbours including the Netherlands and Switzerland allow assisted suicide.

The citizen’s council will have six months to consider the current legal model. After which, the subject will either be put forward to Parliament, using the text drafted by the council as a starting place, or it could be put to a referendum. However, the French president does not plan to change the law prior to the end of 2023.

Key French terms you should know on the ‘right to die’