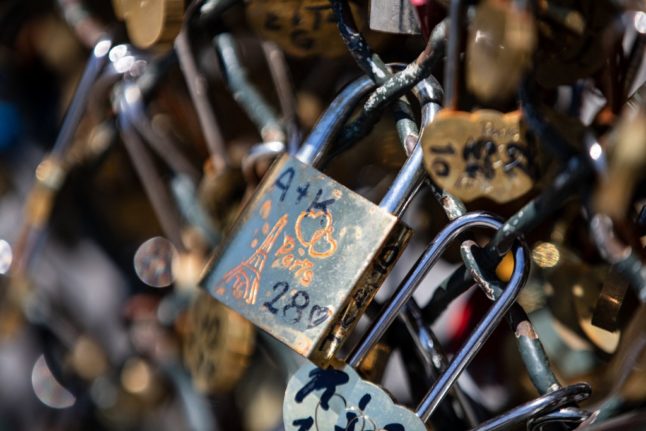 First it was the famous Pont des Arts bridge in 2015, and now it is the Sacre Coeur’s hilltop. Couples visiting Paris will have to find a new way to seal their love because the city is slowly doing away with les cadenas d’amour (love padlocks).

Most recently, Paris’ 18th arrondisement released a statement promising to remove the love-locks that have come to litter Montmartre’s fences, as part of their “Embellish your Neighbourhood” plan.

“Already, philosophically, we do not agree with needing to chain ourselves to love each other. But it also degrades the infrastructure and public space,” said the mayor’s office.

The locks (shown below) will be totally removed starting in 2023, reported Le Parisien.

Painted as one of Paris’ most romantic activities for decades, many lovebirds have made their way to the City of Light with the hopes of attaching a lock to a bridge or – in the case of Montmartre – a gate, and throwing away the key, symbolising their forever commitment to one another.

Unfortunately, these locks became a commitment for the city as well. For Paris’ bridges, the locks posed two key problems: added weight and unsightliness.

In 2014, a section of metal mesh on the Pont des Arts bridge collapsed due to the excessive weight from the love-locks. The locks added approximately 45 tonnes worth of metal to the footbridge.

On top of structural concerns, many Paris residents at the time considered the locks to be an eye sore – taking away from views of the Seine and the city’s monuments.

Just how much love can the #pontdesarts in #Paris take?! Really, it's getting to be a bit much. pic.twitter.com/1265neVMGT

Petitions were launched and open letters to the mayor were addressed, until finally in 2015 the city began to remove the love-locks.

Nevertheless, it was difficult to dissuade tourists from attaching their locks to the bridges, so the wire mesh panels were replaced by perspex. Authorities carried out a similar transformation on the Pont de l’Archevêché.

But the tradition endured, this time making its way to the famous Sacre Coeur hilltop in Montmartre, where fences, gates and even railings host love-locks. To the chagrin of residents, street vendors around Montmartre have sought to capitalise on the locks’ popularity, hoping to sell them to tourists by shouting “Lock! Lock!” around the basilica.

Smaller padlocks go for €3 to €5, whereas larger ones might reach €15.

According to Karen Taïeb, the deputy mayor of Paris in charge of heritage, the padlocks were already being slowly chipped away at before the announcement of the 2023 removal effort.

Occasionally, “when we see that the weight is too heavy” services from town hall will cut locks off. “It can be dangerous,” said Taïeb to Le Parisien.

“It can lead to the destabilisation of barriers, as was the case at the Pont des Arts, but it is also an aesthetic and heritage problem. We thought it was a fad, but it has been going on for fifteen years.”

Where did the tradition come from?

Some point to legends, like the story of a Hungarian woman who lost her lover during World War I, so she went around to every bridge they visited together and attached a lock there in a way to immortalise their feelings toward one another. But it is most likely the result of a popular 2007 Italian film called “Ho Voglia di Te” (I want you).

In the film, the protagonists preserve their unbreakable love by attaching a padlock to a lamppost at the Ponte Milvo in Rome. Then, they dramatically toss the key into the Tiber river.

In 2008, the trend exploded in France, and Pont des Arts became the ‘love-lock’ bridge, later spreading across the city and up the hills of Sacre Coeur.