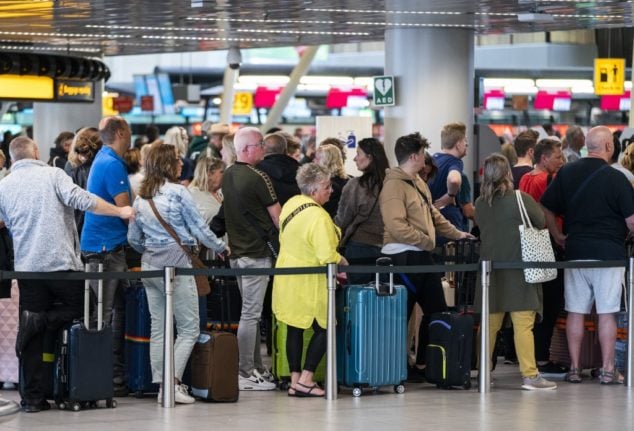 Travellers queue during Ascension weekend in the departure hall of Schiphol Airport, near Amsterdam (Photo by Jeroen JUMELET / ANP / AFP) / Netherlands OUT

“We should not be under any illusions, we will be understaffed to get through the summer. Clearly, there will be additional expectations at the controls and elsewhere,” warned Thomas Juin, president of the Union of French airports to Le Figaro.

There have been chaotic scenes at airports around Europe in recent weeks, and unions warn that France is likely to face similar problems this summer.

In the Paris region, travellers at Charles de Gaulle were already reporting long queues at the beginning of May.

So far, Orly airport has not seen its capacities “overflowing” but it is already “under tension.” The airport’s director, Sandra Lignais, told Le Figaro, she is attempting to stay “vigilant” on the situation.

Juin expects that at some airports in the Paris region, such as Beauvais, traffic will be “even higher than in 2019.”

The Paris region appears to be most impacted by longer than average wait times, with fewer complaints being registered in France’s regional airports. However, the shortage of airport staff is industry-wide, so it would still be recommendable to arrive early.

Since 2020, French airports have lost “15 to 20 percent of their staff,” explained Juin. During the height of the pandemic, many airline workers were either let go, left the industry, or were given part-time work options.

National airline Air France cut almost 20 percent of its workforce during the pandemic – the equivalent to 7,500 jobs.

The Paris airports of Orly and Charles de Gaulle alone need to fill about 4,000 positions. However, the Airports of Paris group told BFM Business that they are experiencing “enormous” recruitment difficulties.

ANALYSIS: What is behind France’s worker shortage?

Wait-times when going through customs is also an issue, as there has been a decrease in the number of border police present at the airports.

In addition to a shortage of candidates, training delays make it difficult to fill positions quickly, especially for people working in airport security jobs that require three to five months of on-the-job training. The summer also poses a challenging time to recruit, as many would-be workers have already scheduled holidays.

France’s Charles de Gaulle airport still advises passengers to “be at the airport 2 hours before the departure of your flight in order to drop off your luggage and complete all police and security formalities.”

However, the airport’s website warns passengers to check their boarding pass as well, because they will indicate more specific boarding time instructions, “according to the busy periods at the airport.”

Several passengers on long-haul flights, including to the USA, told The Local that they had been instructed to be at the airport three-and-a-half hours in advance – and had needed all that time to get through security and boarding queues.

“I arrived 3 hours early and nearly didn’t make it,” one reader said. “The lines were confusing. A few stations seemed to be understaffed.”

Over the Ascension weekend British airline Easyjey cancelled many flights, blaming IT problems.

Dutch airline KLM announced on May 26th that it would be suspending ticket sales for all flights out of Amsterdam’s Schiphol airport until Monday because of staff shortages.

Reuters reports that in recent weeks, lines from the Schiphol airport have been hours long, stretching all the way outdoors and onto the streets. Travellers from Stockholm, Dublin and Manchester airports have also reported long queues.

Rafael Schvartzman, the International Air Transport Association’s regional vice president for Europe, told Euronews that as of March, the aviation industry was already seeing 75 percent of its pre-pandemic passenger numbers, and that “this is a sign of what is to come for this summer,” predicting heavy traffic.

What have your air travel experiences been like in recent weeks? Did you wait in any particularly long lines while departing from French airports? We would love to hear from you – please email [email protected]

France is in the grip of a major confrontation between unions and the government over plans to reform the pension system.

So far, the main actions have been concentrated on one-day strikes that are supported by all eight of the union federations, however an increasing number of unions are filing notices for renewable or unlimited strikes, with some targeting the February holidays.

The French minister of tourism, Olivia Gregoire, called on unions to respect the “sacred period” of school holidays (which in France run from February 4th to March 6th, depending on which zone you are in).

Meanwhile, Philippe Martinez, the head of the hardline CGT union, told RTL that if the government remains stubborn then “there is a possibility of days of action during the school vacations”.

As a result, it is likely that further notices will be filed.  The Local will update this story with the latest – but here’s what we know so far.

Tuesday, January 31st – this is the next one-day mass strike, which will likely see severe disruption on many services, particularly public transport – full details here.

Trains – two rail unions – the hardline Sud-Rail and CGT-Cheminots – have filed a renewable strike notice for “mid-February” in addition to a two-day strike which is to take place on Tuesday, February 7th, and Wednesday, and 8th.

Ski resorts – two of the largest unions representing French ski lift operators and seasonal workers, FO (Force ouvrière) and the CGT, have filed “unlimited” strike notices starting on January 31st – the same day that unions across other sectors have called for another ‘mass strike’.

The CGT union in particular has threatened further actions during the Ski World Championships, held in Courchevel from February 6th to February 19th. Strikes in ski resorts usually primarily affect the operation of ski lifts. You can read more here.

The national union coordinator for French oil giant, TotalEnergies, Eric Sellini, told AFP that these actions would result in “lower throughput” and “the stoppage of shipments.”

The most concrete effect of this is likely to be shortages of petrol and diesel at some filling stations if the blockades are successful in stopping supplies leaving the refineries.

Power cuts – the hardline CGT have also threatened more “direct action” with employees of the State electricity sector threatening to cut the power to certain towns. This isn’t a scheduled action (or indeed a legal one, the government has promised to prosecute workers who do this) but short targeted power cuts could continue into February.

UK border – finally, if you are travelling to or from the UK, be aware that a UK Border Force strike is planned for February 1st and 2nd, which is likely to increase waiting times at the border.

We will update this story as more details are released, and you can also find all the latest in our strike section HERE.