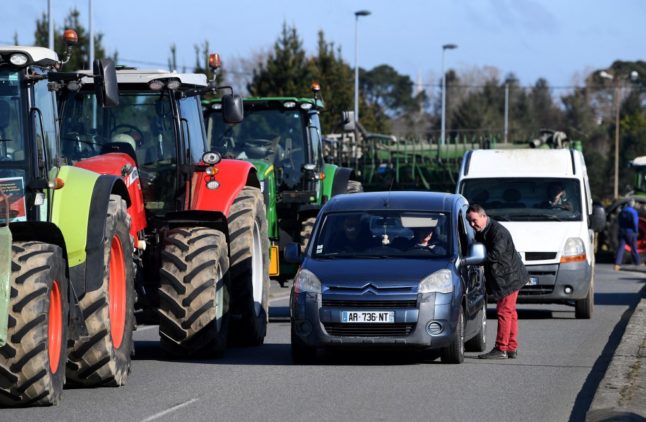 Protestors with tractors and heavy machinery block a road in France. They are angry about rising fuel prices. (Photo by FRED TANNEAU / AFP)

Truckers, taxi drivers and construction workers have been blocking roads across France on Monday, with further protests expected over the rising cost of fuel.

After a weekend of smaller scale protests, Monday saw disruption in several areas including;

Taxi and other private vehicle drivers organised protests around Marseille and in the city centre on Monday morning, driving in very slow processions to bring traffic to a standstill – a method known as an opération escargot (snail operation) or a rolling roadblock.

In the eastern département of Doubs, taxi drivers organised an opération escargot of their own, holding up traffic between the Franche-Comté train station in Auxons, all the way to a supermarket in Châteaufarine. They plan to encircle the town of Besançon.

The north – a key area for European hauliers – was one of the hardest hit parts of the country, with truckers blocking the A1 and A23 motorways. They have also blocked transport hubs near Lens and in the city of Lille. In the Somme département, a short-lived blockade cut off traffic on the A1.

In the Normandy département of Manche, truckers began blocking interchange between the N174 and the A84 motorway at about 5am, blocking heavy goods vehicles but allowing cars to pass. In Calvados, fisherman briefly blockaded a motorway toll station.

The préfecture of Charente-Maritime, in the southwest, warned of traffic jams on N11. Blockages were also set up near Lagord at around 4am. The N237, connecting La Rochelle and Ile de Ré was blocked off.

How long could this disruption last?

Hauliers associations like the OTRE and FNTR called off their plans to protest on Monday after receiving €400 million in direct support from the government last week.

A spokesperson for the FNTR told The Local that it did not have further plans for mobilisation during the week.

But taxi drivers and regular car owners could come out in force later in the week, as they have not received the same support as the hauliers.

As part of its resilience plan to insulate the economy from the war in Ukraine, the government will lower fuel prices by €0.15 per litre of fuel from April 1st. Tax payers, including non-drivers, will ultimately pick up the tab.

On Thursday, public transport workers in Paris and Ile-de-France will go on strike for an undefined period of time, with one union warning commuters that the action could be “long and hard”.

sMore details of the service disruption will be released on Thursday evening.