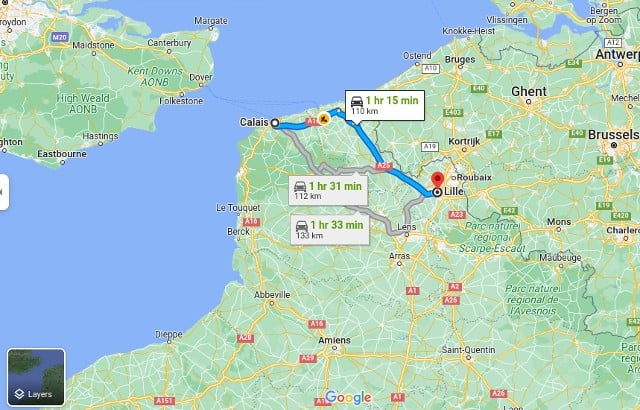 The British visa centre will be in Lille, 110km from Calais. Map: Google maps

Foreign Secretary Liz Truss told parliament a “pop-up” site would be located in Lille, some 110 kilometres from Calais where scores of Ukrainians have gone to try and cross the Channel and join family in the UK.

Disappointed Ukrainians arriving in the Channel port city this week in the hope of getting to the UK have instead been told to go to Paris or Brussels to apply.

If anyone in UK government tells you Ukrainians are not being turned away from Calais, do not believe them. https://t.co/7U3P3bhGbL

That has put pressure on the government in London to establish a bespoke visa application centre in Calais to cater specifically for people fleeing the Russian invasion.

But Home Secretary Priti Patel sowed confusion on Monday by stating first that the centre in Calais was already operational, then moments later that it was not yet ready.

Reader question: Why don’t Ukrainian refugees stay in France rather than crossing to the UK?

She also said the centre would be “away from the port” to prevent a “surge”, given ongoing pressures of migrants seeking to cross the Channel.

The Pas-de-Calais local authority in northern France told AFP on Tuesday that the situation remained unchanged.

“At this stage” visa applications are still being handled at the UK embassy, it added.

The British Embassy in Paris confirmed to The Local that all visa applications for the UK require an in-person appointment at the visa centre, which is in Paris.

Patel’s department then confirmed that visa applications were still only being handled by the UK embassy in Paris.

“We are in the process of establishing a second Visa Application Centre in France which will be by referral from Border Force only to support Ukrainians,” it added.

The new centre will be set up “in the coming days”, said a spokesman for Prime Minister Boris Johnson.

More than two million Ukrainians have fled the conflict, according to the UN. As of Monday evening, the UK had granted 300 visa applications.

That has earned it unfavourable comparisons with EU countries including France, where Ukrainians can enter without a visa and stay for at least a year, with the possibility of renewals, under a special scheme set up last weekend.

The UK insists that security checks still need to be carried out, because of the risk of infiltration by Russian forces among civilian populations.

Prime Minister Boris Johnson, though, insisted his government was “absolutely determined to be as generous as we possibly can”.

Thousands of applications were being processed from eastern and central Europe, he told reporters on Monday.