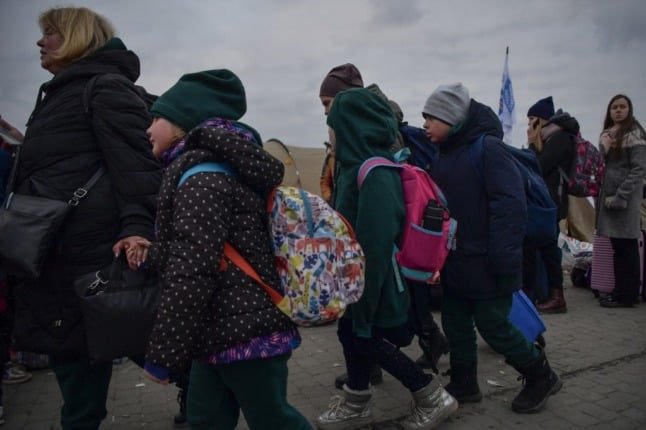 Question: I see France is telling the UK to ‘be more generous’ to Ukrainian refugees, but why can’t they stay in France? Last time I checked France was a safe country, so why do they have to go to the UK?

The short and simplest answer to this common question, of course, is that they can but they may not want to.

Over the weekend French Interior Minister Gérald Darmanin sent a letter to his British counterpart Priti Patel, accusing the UK of a ‘lack of humanity’ as Ukrainians attempting to reach family in the UK were turned back at Calais by British border authorities.

The issue here is visas, and there’s quite a difference in both rules and attitude on the UK and French sides.

Ukrainians have since 2017 been covered by the 90-day rule (the same rule that applies to Brits visiting France since Brexit) which means that they can enter France  and anywhere in the EU without needing a visa.

The EU last week agreed that the 90-day limit for Ukrainians can be extended to one year, renewable if necessary, so they can now enter France (or any other EU country) without a visa and stay there for one year, although depending on the country policy they will probably have to register for residency after arrival.

By contrast, the UK requires all Ukrainians entering the country to have a visa, and this rule has not been lifted because of the war. The UK has introduced extra provisions for Ukrainians who already have family in the UK to join them, but they still need to get the paperwork in order before crossing the Channel.

The visa process involves an in-person interview at the visa centre, which is in Paris, so all Ukrainians who are travelling via France need to come to Paris before travelling up to Calais or other northern ports.

So we can see that staying in France is a lot easier from a paperwork point of view, so why don’t they do that?

It comes down to choice. Many Ukrainians have stayed in France  (France was already home to around 40,000 Ukrainian citizens or citizens of Ukrainian descent) but since the start of the war it is the countries closest to Ukraine – such as Poland and Moldova – which have taken by far the biggest share of the estimated 1.5 million people who have fled.

The most common reasons for country choice is either language or already having family in the country – because of the visa process almost all of the Ukrainians wanting to travel to the UK already have family living there, who they want to join and stay with until it is safe to go home.

And yes, of course France is a safe country. But the combination of geography and the lack of flights leaving Ukraine means that virtually Ukrainians coming to the UK have gone through at least one other country on the way.

Insisting that refugees from Ukraine stay in the ‘first safe country’ would basically mean that the UK would take no refugees from the war-torn country and that many of those fleeing would not be able to join their closest relatives on the other side of the Channel.