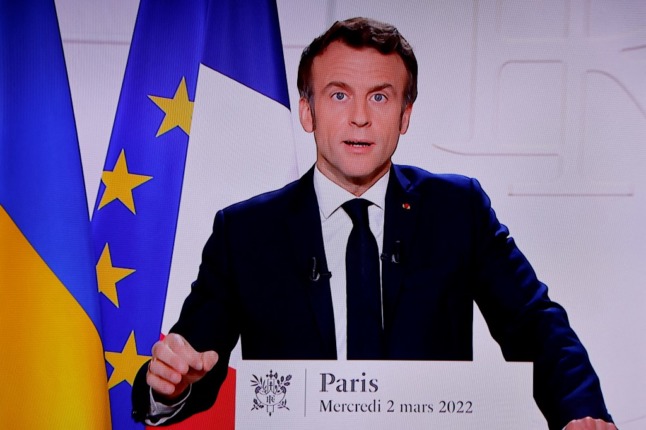 A picture of a monitor taken in a media control room in Paris on March 2, 2022, shows French President Emmanuel Macron speaking from the Elysee Palace during a televised address on the general situation seven days after Russia launched a military invasion on Ukraine. (Photo by Ludovic MARIN / AFP)

Standing in front of a Ukrainian flag, Macron began his speech by saying: “Since the brutal attack launched by President Putin against Ukraine on February 24th, Russian forces have been bombing Kyiv, besieging the most important cities of the country.

“Hundreds of Ukrainian civilians have been killed. Women and children were killed again today. The coming days are likely to be increasingly tough”.

He said that the war would undoubtedly make its effects felt across Europe, including in France, where the prices of petrol, gas and everyday items are likely to rise.

“Our agriculture, our industry, many economic sectors are suffering and will suffer, either because they depend on imports of raw materials from Russia or Ukraine, or because they export to this country. Our growth, now at its highest, will inevitably be affected.”

He said that he has asked Prime Minister Jean Castex to create a comprehensive plan to deal with price rises and other knock-on effects of the war “within the next few days”.

Macron also announced that he would be hosting European leaders at Versailles on March 10th and 11th for a summit to discuss energy independence and defence, saying: “We cannot depend on others to defend us, whether on land, at sea, under the sea, in the air, in space or in cyberspace. In this respect, our European defence must take a new step.”

The French president described his Ukrainian counterpart Volodymr Zelensky as “the face of honour, freedom and bravery”.

“It is alone and deliberately that President Putin has chosen the war. This war is not a conflict between Nato on the one hand and Russia on the other. Russia is not attacked, it is the aggressor.

“This war is even less, as an unsustainable propaganda would have us believe, a fight against ‘Nazism’. That is a lie. It is an insult to the history of Russia and Ukraine, to the memory of our elders who fought side by side against Nazism. The Russian leaders are attacking the memory of the Holocaust in Ukraine.

“Already our Europe has shown unity and determination. We have entered into a new era.”

However he added: “We are not at war with Russia. Today we stand with all Russians who, refusing to allow an unworthy war to be waged in their name, have the spirit of responsibility and the courage to defend peace, and who make this known in Russia and elsewhere.”

He added that France would do its share to welcome the millions of Ukrainians displaced by war, including taking in children separated from their parents.

Macron has been criticised by some for his continuing conversations with Russian premier Vladimir Putin, but told the nation: “I have chosen to remain in contact with President Putin for as long as I can, and for as long is necessary, to unstintingly seek to convince him to renounce violence… and to prevent the contagion and spreading of the conflict.”

But he said he believed that the war will continue and represents “a new era” in Europe.

“But let’s make no mistake. These events will not only have immediate consequences, in the space of a few weeks. They are the signal of a change of era.”

The speech did not directly touch on the issue of French domestic politics, as Macron’s office had already made clear.

Macron has so far not officially declared that he will run for re-election, and the deadline for candidates to declare is Friday, March 4th.

It is, however, widely thought to be extremely unlikely that he will not enter the presidential race. His team had previously announced an event in Marseille on Saturday, March 5th, which was expected to be the first official event of the campaign. However this was cancelled earlier this week because of the international situation.

Macron’s handling of the crisis is generally viewed positively in France, and his poll ratings have gone up over the past two weeks.

READ ALSO OPINION: Macron is on the right side of history and will win the election