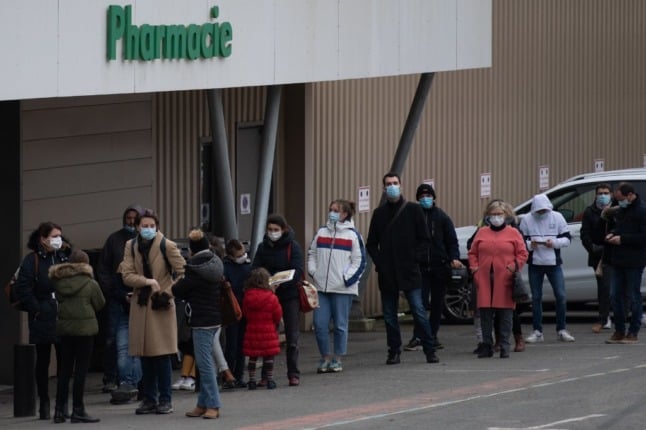 People queue outside a pharmacy in western France. The country is once again facing record numbers of Covid cases. (Photo by LOIC VENANCE / AFP)

France posted 501,635 new cases of coronavirus for the past 24 hours on Tuesday, a new daily record and the first time the headline number has surpassed half a million.

The country is currently recording the highest daily infection rates of any major European nation, with an average of more than 360,000 over the past week.

More than 30,000 people are in hospital with coronavirus across France in the highest such tally since November 2020, official figures showed.

But only a little more than 3,700 were in intensive care, less than during previous periods of high infection.

On Tuesday morning, the French Education Minister told BFMTV that 4 percent of French classrooms were closed due to Covid-19.

The highly contagious Omicron variant that is fuelling the latest wave is believed to be less dangerous than the previous dominant strain Delta. One in ten French people have tested positive for Covid since the beginning of 2022.

Some 364 people died of the virus in the past 24 hours, bringing the total number of deaths from Covid in France to 129,489.

The latest figures came after new Covid rules came into force in France on Monday, with the health pass transformed into a vaccine pass.

READ MORE What changes on Monday as France introduces the vaccine pass?

People are now required to be vaccinated against Covid-19 to enter bars, restaurants, trains and planes.

A negative coronavirus test will no longer be enough to access leisure activities, some work events and long-distance travel.

More than 77 percent of France’s population has received two shots of an anti-Covid vaccine.

How France emerges from the current wave is seen as crucial in April presidential elections, in which President Emmanuel Macron is widely expected to run although he has yet to declare his candidacy.

France has seen a huge increase in the number of Covid-19 infections in recent days.

Hospital admissions and admissions into intensive care are also on the rise, but the number of Covid-related deaths has not risen.

Here is what you can expect for the coming weeks:

Cases to continue rising – For the moment the number of cases is expected to continue growing sharply, with variants BA.4 and BA.5 currently representing over 75 percent of cases in France.

However, even though infections continue to rise sharply (around 60 percent up on last week), the rate of growth appears to be slowing in recent days, accoridng to French data scientist and founder of the Covid Tracker website Guillaume Rozier.

“This [current] stability in cases is an encouraging sign, because the number of cases had been increasing for the past month. There is usually about a three week lag between the peak in cases and the peak in deaths deaths. We still have to be cautious and wait for another week and a half,” said Rozier in one of his regular Twitter threads.

In contrast to the peak of infections during the fifth wave last winter, which saw over 500,000 cases reported a day, this wave is currently seeing an average of 100,000 cases per day, though the peak has not yet been reached.

If you test positive while in France, here is a guide of what to do.

Likely peak in late July – The seventh wave may reach its peak by the end of July in France, estimated Professor Jean-François Delfraissy, the president of the Scientific Council, on June 30th. The wave is likely to continue being fuelled by Omicron sub-variants, BA.4 and notably BA.5.

Regarding the number of hospitalisations, Marc Lavielle, a professor and researcher with the French National Institute for Research in Digital Science and Technology explained that we are “in a fairly steady pattern of exponential growth,” meaning that the “number of hospital admissions doubles every two weeks or so.”

This represents a much slower pace than at the beginning of the epidemic, when the number doubled in only three days. However, Lavielle warned that without restrictive measures the increase could accelerate. Deaths are currently at about 40 per day, but it is important to note that the deaths usually lag infections by three weeks.

In comparison to the end of June in 2021, only 22,000 cases were detected per day, whereas this summer saw around 70,000 per day at the end of June. Nevertheless, this wave has so far seen a lower number of admissions into critical care than last summer’s wave that was fuelled by the more dangerous Delta variant.

The severity of this variant and wave – So far, symptoms associated with this current wave are “standard for Omicron,” while the duration of symptoms seems to last a bit longer. Currently there is no data showing variants BA.4 and BA.5 are more dangerous than other variants in Omicron family, though evidence shows they are spreading faster. Mortality is also not higher than other variants based on current data.

“The main symptoms associated with BA.5 are fairly standard for Omicron: fatigue, cough, fever and headache. However, the likelihood of experiencing loss of taste or smell is higher than with BA.2,” explained Yannick Simonin, virologist and researcher at the University of Montpellier. He added that infected people also seem to be experiencing nausea, vomiting and diarrhea at higher rates.

The duration of symptoms for BA.5 appears to be closer to seven days, rather than four days, which was common for previous Omicron sub-variants.

Ultimately, there is “currently no field data showing this sub-variant is more lethal than others in the Omicron family.”

How concerned should we be?

Based on observations from countries who have already experienced a BA.5 wave, like Portugal and South Africa, so far this wave has not caused a serious over-saturation of hospitals. H

However, there has still been significant increases in hospitalisations due to large number of cases. Therefore, experts recommend staying vigilant by wearing masks in enclosed spaces and crowded areas, as well as getting a second booster if eligible. So far, only 31 percent of over 80s have received their second booster shot.

No return of health pass in metropolitan France.?

The president of the National Assembly announced over the weekend that France’s Covid-19 health pass, rolled out in the summer of 2021 to allow vaccinated individuals entry to bars and restaurants or cinemas, will not be renewed on August 1st.

Lawmakers are set to go over the bill concerning the country’s health security on Monday, July 11th, which is likely to extend some “essential provisions to face the continuation of the Covid-19 epidemic,” according to government spokesperson Olivier Véran. 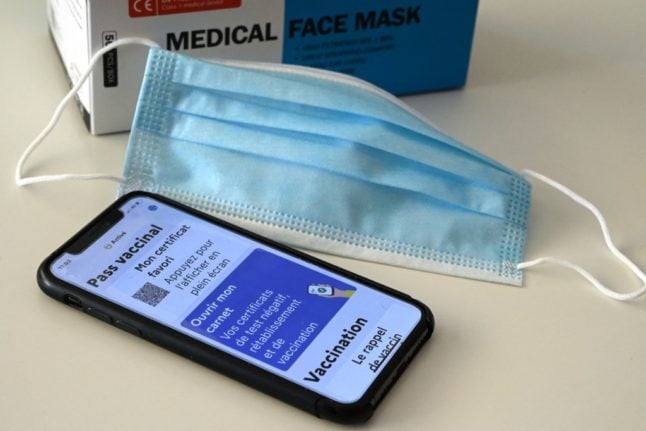 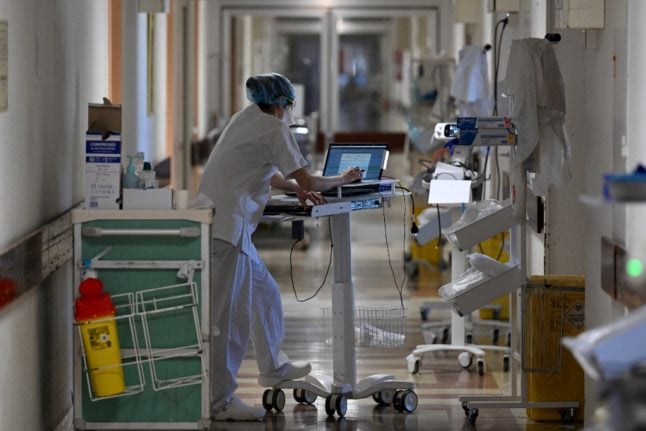