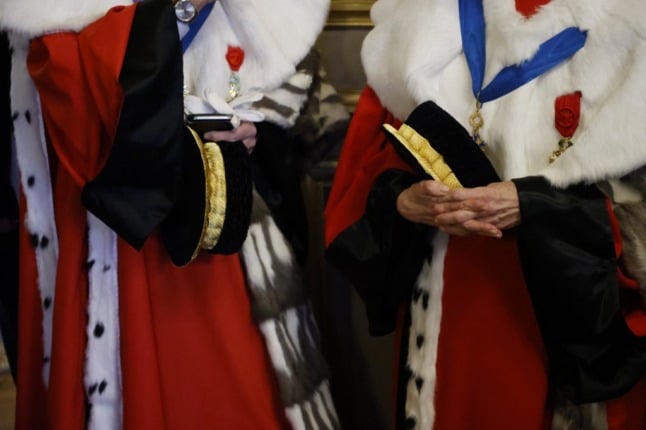 Judges stand outside of a high court in France - a country where many weird laws still exist. (Photo by Ludovic MARIN / AFP)

Every country has its own weird laws. In the UK, you can be sanctioned under the 1986 Salmon Act for ‘Handling salmon in suspicious circumstances’ while in the American state of Arizona, it is illegal for a donkey to sleep in a bath tub.

Needless to say, France has its fair share of weird-sounding laws.

The French Senate even has an office tasked with scrapping obsolete legislation from the country’s legal codes – it is known as the Bureau d’abrogation des lois anciennes et inutiles (BALAI) or “office for repealing ancient and useless laws”.

Here are some of our favourite pieces of legislation:

The town’s forward-thinking leaders passed a municipal decree in 1954 that is still on the books.

The law states that you cannot fly a UFO over Châteauneuf-du-Pape, or land one in the town.

It is thought that this rule was initially passed as part of a marketing campaign and has remained in place ever since. We’re unsure why a place that has a world famous wine needs marketing help from aliens, but there you go.

It is illegal to be naked in your own home

If you are naked in your own home but someone can see you from the street outside, you could potentially be fined between €15,000-30,000 and face up to one year in prison. This law is designed to prevent sexual exhibitionism, rather than targeting people just getting changed in their own home.

Nudism is quite popular in France but there are designated nudist spaces and nudist events where it’s OK to be naked in public. Outside of these spaces, it’s not technically illegal to be naked but you can be asked to cover up and, if you refuse, charged with a disturbing the peace.

Nudists too have their own code of conduct, a key component of which is not being confrontational about their choices and respecting the views of others.

READ ALSO Bare necessities: The rules for taking your clothes off in France France might be a country of nudists, but being seen naked in your own home by someone in the street outside is illegal. (Photo by Philippe LOPEZ / AFP)

Mosquitoes are banned from the French commune of Briollay

The town hall of Briollay, a small town in western France, banned mosquitoes with a municipal decree in 2018. The legislation has had little impact, since mosquitoes cannot read.

Professional photographers are not allowed to take photos of the Eiffel tower at night without obtaining a license, as the image rights are protected. This doesn’t apply to amateurs taking holiday snaps.

Advertisers must use French

France has imposed multiple laws to protect the French language. A 1975 law decreed that advertisers must not use foreign words unless there is no French alternative available.

In practice, advertisers use English all the time – it’s seen as chic and cool to toss in a few English words – but all adverts that do this must have a French translation on the same poster.

Even at Ikea, the welcome signs say Hej! and then explain that hej means bonjour in Swedish.

It is illegal to eat a sandwich at your desk

In Anglophone cultures, life moves fast. It is common for people in the office to wolf down a sandwich at their desk before getting straight back to work.

But in France, a 2008 law states: “It is banned to let workers have their meal at their work premises”.

This rule was lifted during the pandemic in order to help workers respect rules on physical distancing and avoiding mixing. A Decree published in February 2021 allows desk-time lunches, but this is strictly temporary and will be repealed once the pandemic is over.

This is not so much a law as it is a ticketing policy of SNCF – France’s main rail operator.

In 2008, a Frenchman was fined for carrying live snails on a high-speed train. The passenger was eventually reimbursed after a media storm but officially, if you are taking an animal on a train they must also have a ticket.

Animals less than 6kg must be kept in a bag or basket on your knees or between your feet. The ticket price per animal is €7. Animals over 6kg must be muzzled throughout the journey. The cost of bringing such an animal is set at 50 percent of a full tariff second-class ticket. If you plan on bringing a live snail on the train in France, make sure you have bought it a ticket (Photo by Sebastien Bozon / AFP)

In 2011 French authorities banned unlimited ketchup from school canteens, along with unlimited mayonnaise and vinaigrette salad dressing, in an effort to promote healthy eating among kids.

However, the red stuff can still be served with certain meals, such as chips (French fries).

40% of music on the radio must be in French

Since 1996 the country’s top media regulator the Conseil Supérieur de L’Audiovisuel has been charged with enforcing the rule. It affects all foreign languages, but it’s really aimed at stopping too much English-language pop. You don’t have to actually be French, just be singing in French – such as chart-topper Stromae, who is in fact Belgian.

CSA also demands that half of the French music required by the quota be less than six months old. The music must be broadcast during peak listening hours. Radio stations that are “specialised in the promotion of new talent” face even higher quotas – 60 percent of songs must in French.

It is illegal to be rude

The Mayor of Lhéraule, a village of some 200 people in northern France, introduced a rule in 2012 whereby visitors to the town hall have to use polite phrases like bonjour and merci during their visit. Beginning any visit or request without a bonjour is considered exceptionally rude in France.

Should they fail to do so, they can be asked to leave. The rule is not applicable during weddings or election days.

It is illegal to drink alcohol at work – except wine, beer and cider

The law states that alcohol consumption in the workplace is illegal, unless you are drinking wine, beer or cider (including the pear cider poiré). Spirits are not allowed and employees can be sanctioned – but not automatically fired – for being drunk at work.

This doesn’t mean that all French employees are drunk on the job, there is a popular tradition of the workplace pot – where employees gather after the working day is finished to enjoy a few drinks, snacks and a chat. Drinking wine is fine in French workplaces – but hard spirits are not. (Photo by MEHDI FEDOUACH / AFP)

It is legal to marry a dead person

This law stems back to when a dam burst in 1959 and killed 420 people in southern France. A pregnant woman who lost her fiancé was so upset that former President Charles de Gaulle penned a law allowing her to posthumously marry her dead partner.

It’s been used quite a few times since then, often for soldiers who were killed in action before they had the chance to marry, particularly if the fiancée was pregnant. These days it’s used a lot less since having a baby out of wedlock no longer carries social or legal penalties.

Authorities require proof that the couple planned to marry before one of them died.

DIY is banned on a Sunday afternoon

France’s Conseil national du bruit (National noise council) has set guidelines that say you should not carry out noisy DIY or building work on a Sunday afternoon.

This rule is not nationally binding, but most local authorities enforce it. Many local authorities also have their own noise rules forbidding noisy works between certain hours or – in tourist spots – in the summer, so check before you get the drill out.

Parents and other close family members of someone about to get married can launch a legal challenge to stop the marriage going ahead and trigger an investigation. A state prosecutor can also prevent a marriage this way.

You need an actual reason in order to stop the marriage though, it can’t just be that you dislike the potential bride or groom, and reason needs to be serious such as evidence of criminal intent or proof that the couple are too closely related.

Pig owners in fact can call their cochons Napoleon

Many people in France believe that Napoleon Bonaparte passed a law preventing people from naming their pigs after him.

This turns out to be more myth than fact, but many people still believe it to be true to this day. Many French people believe that this law exists – but there is no record of it in the current French legal code.

It is thought that in the pre-revolutionary era, a law was passed mandating that every French household needed to keep a bale of hay in case the king passes by with his horse. Not only is there no longer any royal family in France, but Macron very rarely undertakes official visits on horseback.