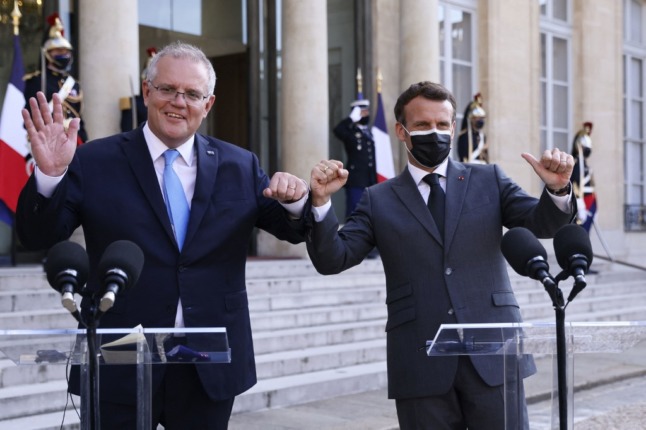 The answer to all of these questions is the same: France.

The nasty row which has broken out between Paris, Washington, Canberra and (to an extent) London, is about more than a €60bn French contract to build 12 submarines for the Australian navy.

It is about France as a Pacific and Indian ocean nation; it is about France’s desire to play an important role in Indian-Pacific affairs, containing China without antagonising China; it is about America’s willingness to treat allies as allies, not vassals; it is about honesty and openness in international affairs.

President Emmanuel Macron has withdrawn the French ambassadors to Washington and Canberra after the US,  Australia and Britain announced a new security pact, called AUKUS, after 18 months of secret talks. As part of the pact France’s 2016 deal to supply 12 diesel-powered, Barracuda-class submarines to Australia has been replaced by a US-UK promise (not yet a deal) to supply nuclear-powered, but not nuclear armed, subs.

France accuses the three English-speaking nations of a “stab in the back”. But it has not withdrawn its ambassador from London. Some commentators suggest that is because France has so many important interests in common with the UK, Brexit or no Brexit.

Other commentators and French officials suggest that, au contraire, it is because Paris regards the UK involvement in AUKUS as something “opportunistic” and irrelevant.

French officials told Le Monde that NOT withdrawing the French ambassador from London was a way of expressing contempt for Boris Johnson’s role as a “stowaway” in a US-Australian submarine.

But why is France so furious?  Arms deals are a murky business. The bigger they are, the murkier they become. One friendly nation beating another to a huge arms deal is hardly new.

Let’s return to our pub quiz question. Australia’s nearest significant neighbour directly to the west is the island of Réunion in the Indian Ocean. To the east it is the archipelago of New Caledonia. These islands are constitutionally and legally not French colonies: they are as much part of France as Corsica or Calais.

The torpedoed submarine deal was commercially important to France but also politically important as the cornerstone of a new Pacific and Indian Ocean security partnership with Australia agreed in 2016 and re-asserted this year. That,  in turn, was crucial to France’s hopes of building an Indo-Pacific strategy which would make it the most important European player in the region.

The commitment to both was restated by Paris and Canberra as recently as June 15th when the Australian Prime Minister, Scott Morrison, visited Macron in the Elysée.

“Every element of our partnership is about reinforcing the values and beliefs that we hold dearly,” Morrison said at the time. He gave Macron no hint that the submarine deal was in trouble. Problems with cost over-runs and design details appeared to have been resolved.

In fact, it now emerges, the US has been involved in talks with Australia and the UK to blow both the French deal and  the Franco-OZ pact out of the water for 18 months. In other words, the secret talks began under President Donald Trump and continued and were completed under President Joe Biden.

“And we thought we were mates,” the departing French ambassador Jean-Pierre Thebault  said in interview with Australian newspapers today. “This is not what you do a partner and even less to a friend.”

Which was more important to the United States? Stealing the submarine deal? Or destroying French hopes of playing an allied role with the US , Japan and others in Indo-Pacific affairs and coping with an increasingly aggressive and confident China?

Some people suggest that AUKUS is just a vulgar  arms deal dressed up as a security pact. The US and Australia already have a security agreement. Why do they need another one? And what can Britain do to help with a tiny Royal Navy and an Army that can’t fill Wembley stadium?

Others commentators suggest that Washington was too ignorant or too inward-looking to grasp that AUKUS would humiliate and infuriate the French. Australia, they say,  grew unhappy with the conventionally-powered French subs. It secretly approached Washington – even though France had offered to upgrade its own deal to nuclear-powered submarines.

One of the many oddities of this affair is that US arms companies already stood to earn more from the French deal than French ones. Only €8bn of the €60bn was to be spent in France (for the submarine hulls mostly). The rest was to be spent on US armaments and high-tech equipment and Australian labour.

The suspicion in the Elysée Palace is that AUKUS is a deliberate and well-planned hit on French ambitions in the Pacific (which precede Macron but have been emphasised since he came to power) Hence the extreme, though symbolic, measure taken by Macron to withdraw ambassadors from allied countries (and the first time ever from the US).

Macron finds himself in a strange place – both vindicated by what has happened and humiliated by it. He has been saying for almost four years that Nato is “brain dead” and Europe can no longer rely on the United States to defend, or even consider, European interests.

He wanted to strengthen  France’s role in the Pacific partly because he feared that Washington – whichever President might be in power – would stumble into a confrontational approach to China. He wanted Europe to have its own voice in western-Chinese relations.

Arguably, he over-reached himself. The US has now, in effect, slapped him down.

There is nothing much he can do about it. Germany is preoccupied by its election. Most other European countries are reluctant to face the consequences of quarrelling with Uncle Sam. None of them have islands in the Pacific or Indian Oceans.

All the same, the AUKUS affair, coming so soon after the debacle of America’s withdrawal from Afghanistan,  proves that Macron is right. Nato is brain dead. Washington doesn’t have allies, only junior partners.  Britain has willingly accepted that role. It is time that for the European Union to consider how (to coin a phrase) it can take back control of its own security and prosperity.