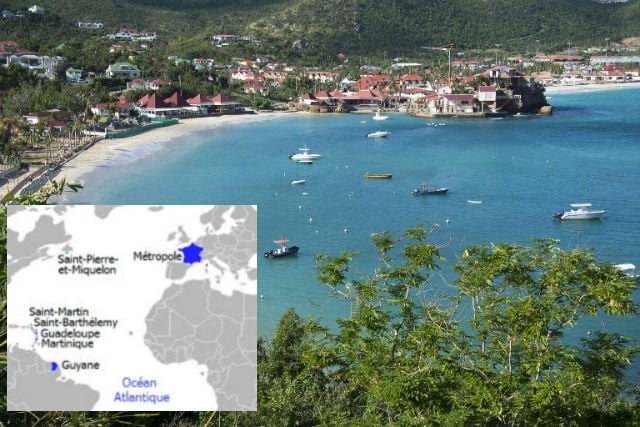 The Saint-Jean bay on the French Caribbean island of Saint-Barthelemy. Photo: AFP
Mainly inherited from the colonial era, the 13 territories are home to 2.6 million people in total, making up around four percent of France's population
of 67.2 million.
They have various statuses in relation to mainland France but all their residents have French nationality and can vote for the president. They also send representatives to France's two houses of parliament.
Here in an overview of the territories, often referred to as “the confetti of the French empire”. Fully part of France
Five of the former colonies are officially overseas regions or departments — fully part of French territory and subject to French laws.
Guadeloupe and Martinique
Located in the eastern Caribbean Sea, Guadeloupe is home to 399,000 people and Martinique to 400,000, according to the French government website.
In the 18th century they formed part of France's lucrative sugar colonies, which were based on African slave labour whose descendants make up much of the
modern population.
Today the Antilles islands are favourite destinations for tourists from the French mainland. A cruise vessel entering the Pointe-à-Pitre harbor, in the French West Indies island of Guadeloupe. Photo: AFP
French Guiana
Located on the northeastern coast of South America, Guiana is mostly tropical rain forest and has a population of around 260,000.
In the 19th century it served as a penal colony. Being close to the equator, Guiana was chosen for the European Space Agency's satellite launch site which is at Kourou. French President Emmanuel Macron on a visit to Maripasoula in French Guiana. Photo: AFP
Reunion
A tropical Indian Ocean island off Madagascar, Reunion is home to just over 850,000 people, many of them descendants of slaves from Africa and Asia.
Its economy is based mainly on agriculture and tourism. Photo: Wikicommons
Mayotte
Unlike the other Comoros islands in the Indian Ocean, Mayotte chose to remain French in a referendum on independence in 1974.
With a population of 256,500, it is prosperous compared to its former partners, attracting thousands of illegal Comoran migrants each year. A view across the ocean from Mayotte. Photo: AFP
More autonomy
Other French territories, called overseas collectivities, are more autonomous and can pass their own laws, except in certain areas reserved for the Paris government such as defence.
French Polynesia
Made up of 118 islands scattered over a vast area in the centre of the Pacific Ocean, French Polynesia is best known for its main territory of Tahiti, a tourist idyll with black sand beaches. It has a population of 273,000. The island of Bora Bora in French Polynesia. Photo: AFP
Saint Pierre and Miquelon
About 20 kilometres (12 miles) off Canada's Atlantic coast, the two islands are the only remnants of France's former colonial empire in North America still in its control. Their population is just 6,000. The small island of L'Ile-aux-Marins in Saint-Pierre, in Saint Pierre and Miquelon. Photo: AFP
Wallis and Futuna
Isolated and without natural resources, two inhabited land masses in the central Pacific along with a number of islets make up this Polynesian archipelago.
Home to 12,000 people, it is heavily reliant on subsidies from Paris. A man in traditional costume during a ceremony in Futuna island. Photo: AFP
Saint Martin and Saint Barthelemy
With 36,000 and 9,400 inhabitants respectively in 2013, these two territories are small islands in France's Caribbean Antilles. The Saint-Jean bay on the French Caribbean island of Saint-Barthelemy. Photo: AFP
Special case
In the southwestern Pacific Ocean, New Caledonia has its own status under a 1998 accord with France which allows for gradually increasing autonomy.
It will vote Sunday on whether to become fully independent.
Home to 269,000 people, the archipelago served as a penal colony in the 19th century. Today its economy is based mainly on agriculture and its vast nickel resources.
Uninhabited and remote
The islands that make up the French Southern and Antarctic Lands are visited only by researchers working in scientific stations.
The uninhabited Clipperton Island, a coral atoll 1,000 kilometres off Mexico in the Pacific, is the centre of a huge Exclusive Economic Zone administered by France's overseas ministry.