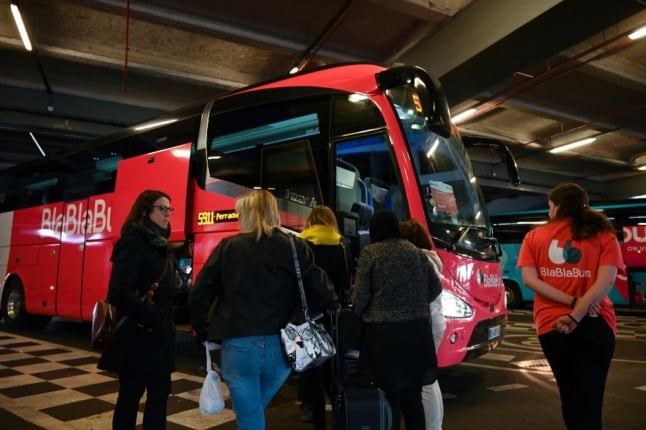 If you want to travel France on a shoestring budget, the budget night bus is your friend.

Sure, the buses don’t smell great, and rattling down the road for 10 hours straight is hardly the most comfortable experience, but how else can you expect to travel across the entire country for under €15, especially on a weekend or public holiday?

And it’s not just about the financial savings, though that’s certainly a pretty good incentive.

Travelling by bus offers a great chance to see different parts of the country. You’ll pass alongside beautiful vineyards and spectacular mountains, as well as plenty of standard, but still lovely, green fields. Taking the bus is also pretty good for the planet, especially compared to air travel, so you’ll win some eco-friendly points too. Your travel won’t be luxurious, but the views make up for it. Photo by NICOLAS TUCAT / AFP

Travelling at night is also great when it comes to maximising your time and minimising accommodation costs. Although it likely won’t be the comfiest night of your life, you can sleep on the night bus – avoiding any hotel costs – and arrive at your destination first-thing in the morning, ready to make the most of the entire day.

At present, the two main budget bus operators in France are FlixBus France – a 2015 offshoot of German company FlixBus – and BlaBlaBus – a recently-rebranded SNCF initiative now operated by carpooling company BlaBlaCar. It’s worth checking both companies out when planning your trip, though they often operate similar routes and largely share similar prices.

For all your ticketing needs, ComparaBUS offers an easy-to-use tool for finding the best times and prices but booking your budget bus ticket is the easy part. The real challenge is managing to arrive at your destination with at least a glimmer of a smile left on your face.

As a self-proclaimed budget night bus expert (read: cheapskate but keen traveller), I’ve put together a list of everything you’ll need to survive the experience.

I once sat next to a woman who listened to opera music at full volume for the entire night.

Watching the sunrise is lovely, but it can often happen a little bit earlier than you’d like. If you want to maximise sleep, it’s worth bringing something to block out the glare.

Sleeping on something comfortable – whether it’s an inflatable cushion, a rolled up jumper, or even a full standard pillow – will make all the difference.

Although the bus will likely stop off at a few service stations, coming prepared with a healthy snack supply is essential. There’s nothing worse than combining hunger-induced rage with uncomfortable travel and difficulty sleeping.

Buses aren’t often particularly well insulated so the temperature tends to drop significantly in the early hours of the morning. Bringing along a blanket – or at least a spare jumper – can keep you as warm and cosy as possible.

The night bus does not smell wonderful, and neither will you after spending the night crammed in with other travellers. If you want to arrive at your destination feeling fresh, I’d recommend bringing along some strong-selling deodorant or perfume.

Staring out of the window is nice for a while – maybe even for a couple of hours – but eventually you’re going to want something to do. Bring a book. Download a podcast. Write a novel. Do anything that keeps you distracted.

Most buses come equipped with power-points for your devices, so you won’t need to worry about running down the battery watching a movie.

This one’s obvious, but it’s worth stressing. The budget night bus is not the place for fashion. Take care of yourself, and opt for sweats, leggings and cosy jumpers.

A sense of humour

This is probably the most important one.

Occasionally, the bus will probably break down or get stuck in traffic for hours at a time, bringing your already-too-long journey into unbearable territory. Sometimes, the budget price of the bus will be manifest in the experience, and it’s healthier to laugh it off if you can, even though I certainly wouldn’t judge you for letting out a few swear words…

The buses go all over France, but here are some of the routes currently being advertised.

If you’re more of a comfort traveller and don’t mind spending a little more, France has several options for domestic travel.

Train – the French train network is good and relatively cheap. The high-speed TGV routes mean you can be from Paris to Nice in around 6 hours, while Ouigo trains offer a budget option for long distances. Tickets are also free to refund or change up to three days before departure. For those like nighttime travel, France is also rolling out a network of new night trains – both domestic and international.

Plane – domestic plane routes do exist, but a new environmental law making its way through parliament means a ban on flights between two French cities if you can travel the same distance by train in less than two and a half hours.

Car-sharing – if you don’t have a car and are visiting somewhere that does not have good public transport connections, check out the ride sharing service BlaBlaCar. Car owners hire out space in their vehicle in exchange for a contribution to petrol money. A bonus for French learners is that chatting in the car amounts to a free French lesson (the Bla Bla in the company name originally referred to the fact that you could specify whether you wanted a ‘chatty’ journey or not).

Car hire – most French cities have reasonably cheap car hire options, but if you’re travelling a long distance make sure you budget for motorway tolls as well as fuel costs.