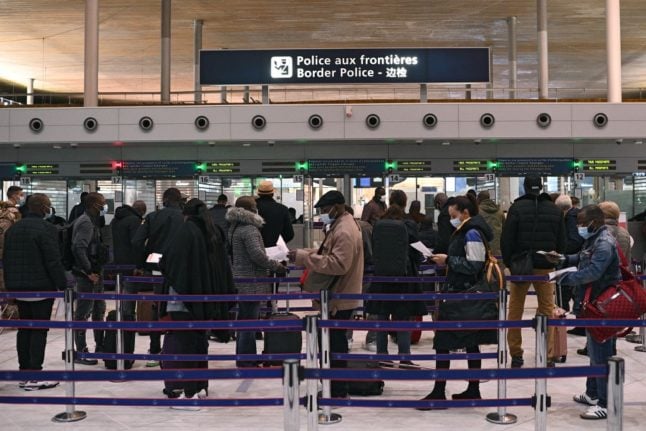 Travellers prepare their documents as they queue at the immigration desk of Roissy Charles-de-Gaulle international airport. Photo: Christophe ARCHAMBAULT / AFP

In effect, France already has a three-tier system of travel restrictions, with travel from certain countries banned in almost all circumstances, others allowed to travel with testing and quarantine and arrivals from within the EU allowed with no quarantine requirement.

However from June 9th, this will be formalised into a ‘traffic light’ system, with red, amber and green countries.

“Regarding countries that are outside the European area [EU and Schengen zone countries] we will work on lists and colours. There will be the green countries, orange countries and red countries.”

More detail has now been revealed about how these will work:

Red – travel will be banned from ‘red list’ countries in almost all circumstances, and even fully vaccinated people will be covered by this ban. Red list countries will be places where variants are causing concern, said foreign minister Jean-Yves Le Drian. This sounds very similar to the rules already in place for 16 countries deemed high risk. Almost all travel from those countries – which include India and Brazil – is banned, and people who are allowed to travel face a strict 10-day quarantine enforced by visits from the police.

Amber – travel will be allowed for any reason, including tourism and family visits, but only people who can prove they have been fully vaccinated will be exempted from testing and quarantine requirements.

To be counted as ‘fully vaccinated’ you must have received one of the four vaccines currently licensed for use in the EU – Pfizer BioNTech, Moderna, AstraZeneca or Johnson & Johnson (known as Janssen) and it must be more than two weeks since your final dose of the vaccine.

Green – travel will be allowed for any reason with no requirement to quarantine, but travellers may have to present either proof of vaccination or a negative test to enter.

France plans – health situation permitting – to reopen its borders to visitors from outside the EU from June 9th and Le Drian said that the aim is to have the green list published by then.

Until then, it is important to note that if you are travelling to France the rules are the same whether you are vaccinated or not.

There is also a “principle of reciprocity” added Le Drian, so countries that refuse to recognise French vaccination certificates may not be added to the French ‘green list’ even if their health situation is good.

What about the UK?

Asked about the UK’s situation, Le Drian told French radio station LCI: “We hope that the control of variants can develop, but the arrival of the Indian variant in the United Kingdom poses a problem.”

Germany has put the UK back on its risk list due to the situation with the Indian variant.

Asked if this was likely to happen in France, Le Drian replied: “Perhaps not on the red list.”

The French government is also working together with the EU to set up a digital Covid-19 ‘health pass’ with vaccination certificates and test results that will become key for international travel within the bloc.