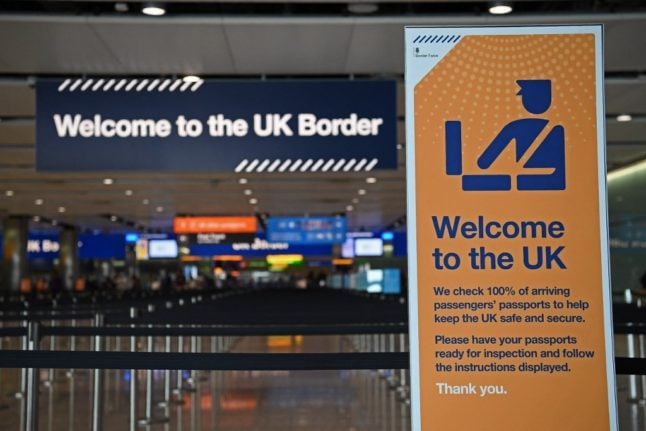 The UK is operating a traffic light system for travel giving each country a designation – red, amber or green – based on data including case numbers and vaccination rates in the country.

The UK government does not differentiate between vaccinated and unvaccinated travellers, so these rules apply to all arrivals, even those who have had both doses of the vaccine.

On Thursday, governments in England, Scotland and Northern Ireland announced changes to their lists.

On the amber list are all the countries The Local covers; Austria, Denmark, France, Germany, Italy, Norway, Spain, Sweden and Switzerland.

However things have changed for Spain’s Balearic islands, previously on the amber list they have now been moved to the green list by England, Scotland and Northern Ireland – which means people who have visited the islands do not need to quarantine.

People can travel from amber list countries for any reason – there is no need to prove that your trip is essential and entry is not limited to UK nationals or residents.

However, there are rules on testing and quarantine in place.

It should also be noted that the UK government advises against travel to amber list countries for leisure or tourism reasons. This isn’t a travel ban, but this kind of official advice can invalidate travel insurance, so check your policy before you travel.

There are some exemptions to the quarantine for compassionate reasons or for people in certain professions – find out more here.

Most countries require a negative Covid test for arrivals from the UK and some have quarantine in place, so check carefully the rules of the country you are travelling to or from.

On the subject of vaccinated travellers, a spokesman for the British Department of Transport told UK media: “In recognition of our successful domestic vaccination programme, and as part of the Global Travel Taskforce’s checkpoint review, our intention is that later in the summer, arrivals who are fully vaccinated will not have to quarantine when travelling from amber list countries.

“We expect this to occur in phases, starting with UK residents.

“They will still be required to take a pre-departure test and a test on Day 2, and any positive results will be sequenced to continue to manage the risk of importing variants.

“At the same time, we intend to remove the guidance that people should not travel to amber countries. Pending decisions on whether under-18s should routinely be offered vaccination, we will also take clinical advice on whether regular testing can provide a safe alternative to quarantine for children accompanied by vaccinated adults.

“Further detail will be set out next month including the rules which will apply to children and those unable to be vaccinated, how we will operationalise this approach at the border, and the dates on which these changes will come into effect.”

However, transport secretary Grant Shapps said: “We’re moving forward with efforts to safely reopen international travel this summer, and thanks to the success of our vaccination programme, we’re now able to consider removing the quarantine period for fully vaccinated UK arrivals from amber countries – showing a real sign of progress.”

The Local has requested clarification on this point.

There is no timescale for these changes. Asked earlier in the week if they will be in place by the beginning of August,, British Health Secretary Matt Hancock said: “We’ll get there when it’s safe to do so.”

Those commuting in and out of Paris, as well as tourists looking to enjoy a day at Disneyland, are familiar with the region’s extensive suburban train network (RER). According to French President Emmanuel Macron, it might soon be replicated in other French cities in the coming years.

In the latest in a series of short-videos answering constituents’ “ecological” questions, the President responded to the question “What are you doing to develop rail transport in France, and offer a real alternative to [travelling by] car?” by offering plans to duplicate Paris’ RER system elsewhere.

You can watch the full video here;

Macron said that building suburban train networks in other cities would be “a great goal for ecology, the economy, and quality of life.”

While he did not name any locations in particular, the president did say that the plans would concern “the ten main French cities.”

While reminiscing about his grandfather, a former railway worker, Macron added that the project would help to decarbonise transport and ease congestion in city centres.

The RER (Réseau Express Régional) system in Paris is a network of trains running across the region, connecting the suburbs to the city. The network has been expanding since the 1960s. While it now covers a large area, the network is notably less reliable than the city-centre Metro services, with users often complaining of delays and poor infrastructure.

Lyon, France’s third-largest city and second-largest metropolitan area, has already discussed plans for the Lyon RER, with hopes that it will be fully operational by 2035, at an estimated cost of between €1.4 and €7 billion.

As for when, the President did not give a timeline, but the Elysée told Le Figaro that the first step would be for “the orientation council for transport infrastructure” to identify which projects could be “launched first.”

The project will also be steered by France’s Prime Minister, Elisabeth Borne, the former Minister of Transport. When she was in this role, Borne had submitted plans to develop RER systems in different French cities.

The project to add suburban train networks across the country was met with support from the current Transport Minister, Clément Beaune, who welcomed the plans as a “major ecological and social transformation for the coming decade.”

However, not everyone is convinced. Some, like the Mayor of Cébazat in Puy-de-Dôme, have already questioned whether the Paris region concept, which would require heavy investment, could effectively be replicated smaller cities.

“It must be fully efficient,” the Mayor, who is also an expert in transportation, told Le Parisien.