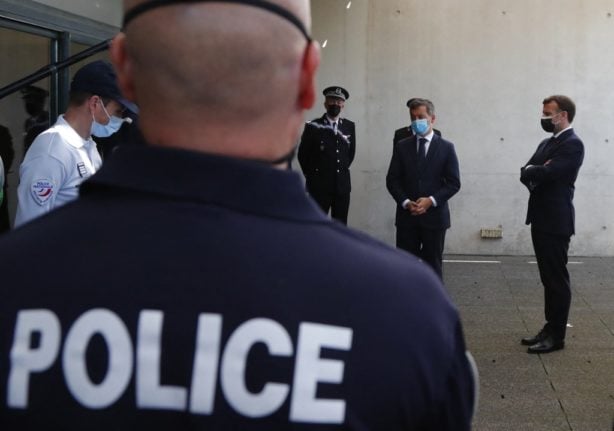 One year ahead of the presidential elections, for which he is expected to run for a second term, President Emmanuel Macron has toughened up his talk on crime.

In a long interview with the right-wing French newspaper Le Figaro, published on Sunday, Macron warned that “everyday violence” was on the rise in France and vowed to “push back delinquency everywhere”.

It came after a spate of high profile crimes – including gang brawls, murders and kidnappings – that has caused alarm in France. Critics of Macron claim the country is becoming more dangerous by the day under his rule.

But is this true?

What the experts say

“I don’t see any evidence that the situation has deteriorated significantly,” criminologist Sébastian Roché told The Local.

Roché is one of France’s leading researchers on police and crime. One of his specialities is youth delinquency, which has been a main topic in France of late following several reports of gang brawls, sometimes involving teenagers as young as 15.

“There are problems, which are real,” Roché said, but “if we back up a bit historically, France remains a relatively safe country.”

The most secure way of measuring insecurity, Roché said, is the homicide rate. The reason is simple: the rate does not depend on reporting trends. Police have to register all homicides whether they are reported or not. This makes it the best measurement of crime levels in a country, and it is also comparable with other countries.

France’s homicide rate – which varies between 1 and 1.5 per 100,000 inhabitants – is in line with the European average. The most comparative rates show France at 1.2, the UK’s rate is also 1.2, while the rate in the United States is around four times higher that of France: 5 per 100,000 inhabitants, according to data from 2018.

The below graphic from Our World in Data illustrates the difference.

The number of homicides in France has remained quite stable in recent years, with the exceptions of two notable spikes marking the terror attacks in Paris (2015) and Nice (2016).

The graphic below shows the number of total homicides registered in France between 2014 and April 2021. The graphic shows that there has been an increase in homicides in 2021, but it is one that aligns itself with the broader trend of fluctuations than an unusual spike and follows a low rate in 2020 (when most types of crime fell during the two periods of lockdown).

Looking back a bit further, the general trend has been a steady fall. Until the 1990s France had over 1,600 murders a year, nearly double the around 850 recorded in most recent years. When it rose to 970 in 2019, some French media alerted that the homicide rate was on a “worrying” rise, by 8 percent in a year. But in 2020 the tally dropped back to 863.

Reading the news can give a different impression than these statistics. Back in February, far-right magazine Valeurs Actuelles ran an article with the headline: “Between 2000 and 2020, the number of homicides has spiked by 90 percent in France.”

The claim, later debunked by French media as false, was based on another interview with Le Figaro, in which a criminologist warned that a “discrete epidemic” of crime was spreading in France.

But the criminologist in question was talking about “homicidités“, an umbrella term that muddles homicides and attempted homicides, and which officials warn could be greatly increased by a general increase in the tendency of reporting crimes, particularly domestic abuse.

Other types of crime

“With phenomena as sensitive as fear of crime, you need to be as careful as possible when looking at statistics,” Renée Zauberman, a sociologist at the French Scientific observatory for crime and justice (OSCJ), told The Local.

“You cannot draw conclusions from every short-term survey.”

Another important factor is that, when French police collect data of different types of crimes, these only include those crimes that were reported to the police.

Some crimes – like sexual violence – are more likely to go unreported than others – like a burglary or car theft – where the victim needs to report the crime to get claim their insurance.

To improve its crime statistics, France has, like several other countries have, begun incorporating citizen reports that include crimes that went unreported.

These reports, known as enquêtes Cadre de vie et sécurité (CVS), are considered to more accurately reflect the reality than the number of crimes reported to the police.

The graphic below shows the number of violent attacks on over-15s in France from 2014 until April 2021. The blue line is the incidents recorded by police, the red line reflects numbers reported in the CVS surveys. Since 2014, the trend has been a steady increase in this form for violence, interrupted by a steep drop during the lockdown in the spring of 2020. However this rise could also reflect an increase in people reporting the crimes.

When looking at car thefts and burglaries – the two types of crime that alongside homicides are the most credible statistics – both are declining.

This graphic shows the number of car thefts registered since 2014 and until April 2021. This graphic shows the same for burglaries: Sexual violence, on the other hand, has seen quite a steep rise since the 2014. This rise is, at least partially, due to more victims reporting sexual violence.

READ ALSO: Domestic violence and rape cases on rise in France as lockdown causes other crimes to fall So why is everyone talking about violence and crime?

But even if the general trend is a relatively stable one, this does not mean that France doesn’t have any problems with crime or the fear or crime.

When Macron travelled to Montpellier this week to show that he was cracking down on drug trafficking, it was in response to inhabitants raising the alarm that the southern city has become infested with drug-related crime since the first Covid lockdown last spring.

Other cities such as Dijon have struggled with brutal gang rivalries that have traumatised locals.

However the gap between the reality and what people perceive it to be, is jarring.

“Seventy percent of the French population consider that criminal activity has increased a lot in recent months,” Jérôme Forquet, a political scientist at the polling institute IFOP, told France Info on Monday.

He added that “70 percent consider crime to be equally important” as the coronavirus pandemic. It was perceived to be more pressing than climate change, “at the same level of unemployment.”

Knowing that his main challengers will come from the political right, Macron wants to silence criticisms that he is too soft on crime. This is a common political strategy in France, criminologist Roché explained, adopted by presidential hopefuls in several previous elections.

“There is a tendency to dramatise the situation and then frame yourself as the one who will come to the rescue,” he said. “Like a white knight.”