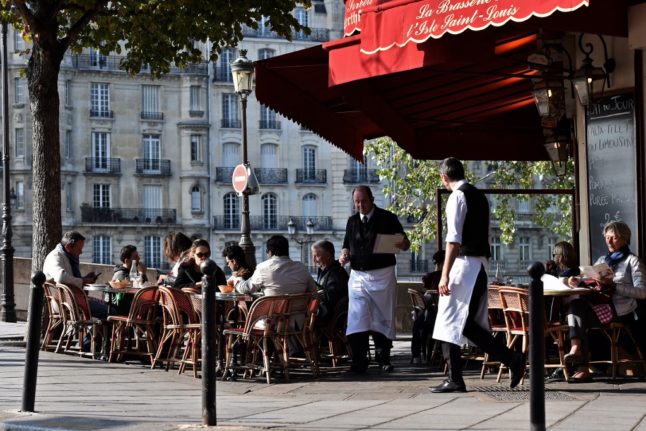 Could a trip out for a drink require a pass this summer? Photo: Christophe Archambault/AFP

Speaking to American news channel CBS, Macron said that he hoped that Americans would be able to travel this summer and mentioned the introduction of a “special pass”, which would prove that the traveller has been vaccinated or has recently had a negative PCR test.

The idea of ‘vaccine passports’ has proved controversial in France, with many arguing that they are discriminatory and unfair and also amount to coercion to take what is supposed to be a voluntary vaccine.

However, French government spokesman Gabriel Attal has confirmed that the introduction of a  ‘health pass’ was a likely scenario.

What is being proposed?

There are proposals for France’s own ‘health pass’, but the EU is already working on a European ‘green pass’ which would be used for the purposes of cross-border travel.

Head of the European Commission taskforce Thierry Breton told BFMTV that the health pass, now named ‘un certificat vert européen’, the ‘European Green Certificate’, or the ‘Digital Green Pass’ will likely be digital, available to everyone including children, and would be administered on a voluntary basis.

Crucially, it’s not just for those who have been vaccinated – the pass will consist of three separate certificates, showing that the traveller has either been vaccinated, recently tested negative for Covid-19, or has recovered from the virus within the past 180 days, according to EuroNews.

This is an important point for France, as it means the pass can be used by people who either have not been able to get a vaccine so far, cannot be vaccinated for medical reasons or who simply choose not to be.

Within France, there are also moves to create a ‘vaccine pass’ on the TousAntiCovid covid-tracker app, known as TousAntiCovidCarnet The app will allow either a vaccination certificate or a negative PCR or antigen test to be downloaded, and then create a QR code which can be scanned.

Initially this will be used for travel only, but the technology would allow it to be used for other functions.

Digital affairs minister Cedcric O said: “Health minister Olivier Véran and I have already said that the health pass is not envisaged for everyday activities such as going to a restaurant or a shop. Questions may legitimately arise for slightly different events that bring together large numbers of people such as concerts, festivals and trade fairs.

“This is still being discussed by the government.”

When is it likely to be in place?

When the EU pass idea was first announced, Breton stated that the health pass would be available from the end of June. The EU is targeting summer travel with the pass, hoping to allow countries such as Spain and Italy that are heavily dependant on tourism to gain at least some tourist revenue this year.

There is no firm date for the launch so far, however.

The French TousAntiCovidCarnet is now up and running for test results, with vaccine certificates to follow shortly, although at present it is only being used on a trial basis for travel between France and Corsica.

Who is backing the plan?

After Macron’s plan of action to resume travel between France and the USA, it seems international travel is high up on his agenda at the moment. The rollout of the European Green Certificate is likely a top priority at the moment with tourism season about to begin resulting in a potential boost to the economy.

European Commission Vice-President, Margaritis Schinas, told EuroNews that he is confident of a speedy approval process due to the fact the certificate is a regulation across the entirety of EU member states.

“There is a growing convergence, amongst member states on the need to have such a tool”, Schinas stated. “The document is about recovering our way of life.”

What concerns have been raised about it?

Whilst the European Green Certificate has been mostly welcomed, there have been some concerns raised about data and privacy. However, the European Commission President, Ursula von der Leyen, announced on Twitter that the pass will respect data protection, privacy, and security.

Additionally, European MPs have questioned how the process will work due to the system being so new. Belgium MP, Phillipe Lamberts said he felt the haste of the process could create “considerable distrust”, whilst fellow Member of the European Parliament, Sophie in’t Veld said the health pass is “an abuse of an emergency situation”.

However, while the idea of a pass for international travel is largely accepted, the idea of a pass to be able to get access to places and services within France is a lot more controversial, not least because there are still a lot of people in France who have so far not been offered a vaccine.

Foreign Trade Minister Franck Reister acknowledged this problem, telling BFM Business: “The difficulty today is that we cannot give access to the vaccine to everyone. You know that there is a hierarchy according to age, according to risks.”

Camille, a student currently distance learning said: “We have given up a lot during this pandemic, and expecting us to watch older generations who have been vaccinated enjoy normal activities of life whilst we’re prohibited from them is unjust.”

Raphael Khalifa, a 29-year-old lawyer living in Paris’ 19th arrondissement added: “Young people won’t be able to go to spaces like bars, but are the individuals who predominantly use them.

“Even from an economic perspective, the majority of money coming into such venues, along with restaurants and clubs, is coming from young people, so if the aim is partly to keep the economy afloat, a vaccine passport won’t help.”

What about the tourist industry?

“Anything that allows tourism to open up again is going to be a good thing in terms of reviving the industry and getting back to work, particularly the European Green Certificate,” said Laura, a tour guide based in both Paris and Champagne.

“Proof of vaccine [for travel and leisure] doesn’t concern me. I understand why countries are starting to say, ‘if you haven’t got a vaccine for this deadly disease you can infect others with, you can’t come into our country, or in domestic terms, our restaurant/bar.

“My only concern is that I hope the government border guards check vaccine passes on arrival when individuals come from abroad.

“I wouldn’t want it to be for tour guides to check tourists have them to partake in a tour. As a guide, it would be very uncomfortable to enforce.”