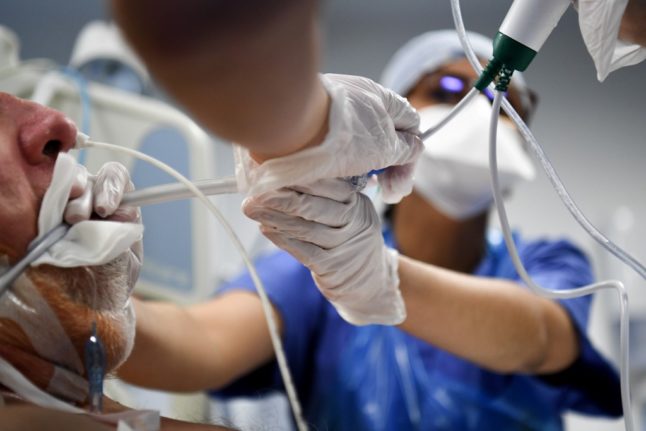 Medical staff tend to a patient at the intensive care unit at the AP-HP Tenon hospital in Paris on January 26th. Photo: Alain JOCARD / AFP

French President Emmanuel Macron and his government will discuss whether to tighten Covid restrictions in the capital and its suburbs on Wednesday, according to media reports on Tuesday morning.

“There will be a review of the situation throughout the country, and in particular Île-de-France,” the health ministry confirmed to AFP.

However public health chief Jérôme Salomon discarded the idea to impose a lockdown in the Paris region as “not on the cards.”

“This is a measure of last resort that would be proposed to the government and the head of State if we were under the impression that hospitals could not cope,” he told French radio RTL on Tuesday.

Health authorities on Monday ordered the region’s hospitals to slash their procedures by 40 percent in response to their intensive care units being at the brink of becoming overwhelmed by Covid patients.

France now has the highest number of intensive care patients since late November. On Monday, 381 new patients were admitted into intensive care wards, putting the total number at 3,849, according to the latest government data.

These patients were younger than they had been since the first wave in the spring of 2020, according to French data scientist Guillaume Rozier. On his CovidTracker Twitter account, Rozier pointed out that 40-59-year-olds now represented the second largest group of intensive care patients, after 60-69-year olds.

The drop in the number of over-80s in intensive care has been attributed to the vaccination campaign, to which they were first in line.

The number of total hospital patients in France also increased on Monday, by 1,584 over the past 24 hours, adding up to 25,195 Covid patients nationwide. In total 359 deaths were registered in hospitals on Monday.

The greater Paris Île-de-France region, which counts about 12 million inhabitants, currently has 973 Covid patients in intensive care compared with a capacity set aside for virus cases of 1,050, the director-general of the ARS regional health service, Aurelien Rousseau, told AFP.

“This is a very tense situation,” he said.

Since a spike in the number of virus infections two weeks ago, daily admissions into intensive care have been between 70 and 80 patients, but only half that number at most were being discharged, leading to a daily net increase of 35.

At that growth rate, current hospital and clinic Covid capacity will be exhausted as early as this week.

“We needed to react very fast,” said Rousseau, who gave “a firm and immediate order” to cancel 40 percent of scheduled hospital care.

The move will take capacity to 1,577 Covid intensive care spots by next week, he said.

The order comes as the French government has been scrambling to avoid another national lockdown although Covid infections remain stubbornly high.

Vaccination centres over the weekend administered 585,000 injections as Prime Minister Jean Castex called for “a national mobilisation” to boost the number of inoculations.

So far France has administered around 5.5 million doses of the three vaccines authorised for use – Pfizer/BioNtech, Moderna, and AstraZeneca/Oxford University – according to government figures.

This meant that 30 million people – two thirds of the French adult population – could be vaccinated by the end of June, she said.

As the country waits for vaccinations to make a dent in infection statistics, the government has resorted to regional weekend lockdowns, with the latest one affecting hundreds of thousands of people in the north of the country.

There has been speculation about a similar move coming for the greater Paris region, but so far the government has appealed to people to behave responsibly, and police banned the consumption of alcohol outdoors in the capital to try to reduce the crowds gathering to enjoy the spring sunshine.

HEALTH
What you should know before having surgery in France
Url copied to clipboard!