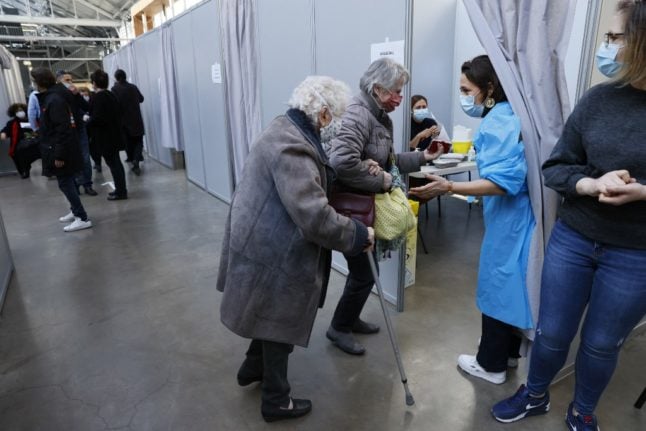 After Prime Minister Jean Castex announced the stepping up of the vaccination effort, centres around France opened on Saturday and Sunday and hundreds of thousands of eager recipients went to receive their jabs.

“We are calling for a national mobilisation,” Castex told reporters last Thursday. “Mayors, nurses, hospitals, everyone needs to be on deck, including the weekend.”

On Saturday, around 220,000 injections were administered country-wide, compared with 80,000-85,000 on a normal Saturday, with a weekend total of 585,000 injections, the majority of them first injections.

The prime minister, health minister and interior minister all visited vaccine centres over the weekend as the government pushes for more people to get vaccinated.

Health Minister Olivier Véran who also written to all the country’s healthcare workers, only 40 percent of whom are vaccinated so far, pleading with them to get the vaccine in order to protect themselves and their patients.

In southwest Paris, mayor Philippe Goujon was one of the local officials who answered the government’s call for a “national mobilisation” to accelerate weekend vaccinations – but wondered why the surge has taken so long.

In the town hall of the wealthy 15th district of the capital, hard-pressed doctors and municipal staff opened the doors of their vaccine centre on Saturday and Sunday.

“There’s a gigantic difference,” Goujon told AFP. “For a start we’re open at the weekend, and secondly we’ve gone from about a hundred vaccinations a day to 1,200.”

He dismissed any suggestion that the previous Monday-Friday operation was because of the sacred status of the weekend in France, where shops were long banned from opening on Sundays, or difficulties in finding volunteers.

“We didn’t have enough doses. It’s only an issue of doses,” he said as elderly people lined up outside ready to head into one of 10 different booths. “At the beginning we thought we’d open every day including Saturday and Sunday.”

By the end of the weekend, staff had injected well over 2,000 people, around three times the number seen in a usual week.

Mayor Goujon, who is from the opposition right-wing Les Républicains party, applauded the sense of urgency, but said it has come too late – and at a cost of lives and new infections.

“I heard the prime minister call for a national mobilisation. Why didn’t he do this a month and half or two months ago? We should have had this sort of organisation in place in mid-January,” he said.

Ten weeks since the first jab in France, the government is looking to adopt measures put in place by countries with the best vaccination track record, such as Britain and Israel.

There is talk of creating “vaccinodromes” with capacity to handle thousands of people per day.

The country’s pharmacies will be offering the vaccine from March 15th, while the fire service and the army are to be drafted in greater numbers to get more shots in arms.

Vaccination efforts have taken on new urgency because of an uptick in infections, which has led to weekend lockdowns for more than two million people in addition to a nationwide 6pm curfew.

So far France has administered around 5.5 million doses of the three vaccines authorised for use – Pfizer/BioNtech, Moderna, and AstraZeneca/Oxford University – according to government figures, with 1.9 million people having received both doses.

This compares with roughly 23 million first doses in neighbouring Britain, where less than 1 million people have received their second dose.

At the town hall in Paris, Odile Morisseau joked that France perhaps needed help from across the channel as she left the vaccination centre, a smile on her face.

She’d be keeping tabs on progress from friends in the UK, she said.

“Maybe we need to bring in Boris Johnson?” joked the 71-year-old, referring to the British prime minister. “I know he’s made mistakes, but they seem to be doing a good job with vaccinations.”

The problem faced by France is a lack of doses in some areas and a surplus in others.

Other complaints include a time-consuming process to give consent for a vaccination, as well as reliance on an online appointment system that has baffled many elderly people.

“This was all great, perfect,” said Eveline Frantz, a retired German teacher, as she left the town hall on Sunday with her freshly jabbed father.

“But the general policy has been a complete mess.”