If you either have a child in school or are trying to avoid busy travel days and are looking up French school holidays you will stumble across the zone system.

Question: Is there any kind of logic to how France divides itself up into zones for school holidays or did someone just pick town names out of a hat?

Certain school holidays occur at different times of year in different parts of France, but unlike countries like the UK where this evolved over time based on – among other things – the date of the potato harvest in different parts of the country, the French system is a deliberate creation that has a specific purpose.

Here’s how it works.

Mainland France is divided up into three zones – A, B and C which include different regional education authorities known as académies – basically a local education authority under the Ministry of Education (see map below). Each académie includes several départements.

This isn’t a particularly historic thing, it’s only been in place since the 1960s and it was created for a very specific reason – to help out the tourist sector.

Instead of the whole country being on holiday in the same fortnight, the holidays instead span a month and mean that tourist businesses such as ski resorts, hotels and beach resort owners get a longer ‘peak’ in order to accommodate everyone.

A side effect of this is reduced traffic congestion around the spring holidays, although the start and finish of the Christmas and summer holidays – when it frequently seems like the whole of France is on the road – are definitely days to avoid travelling. 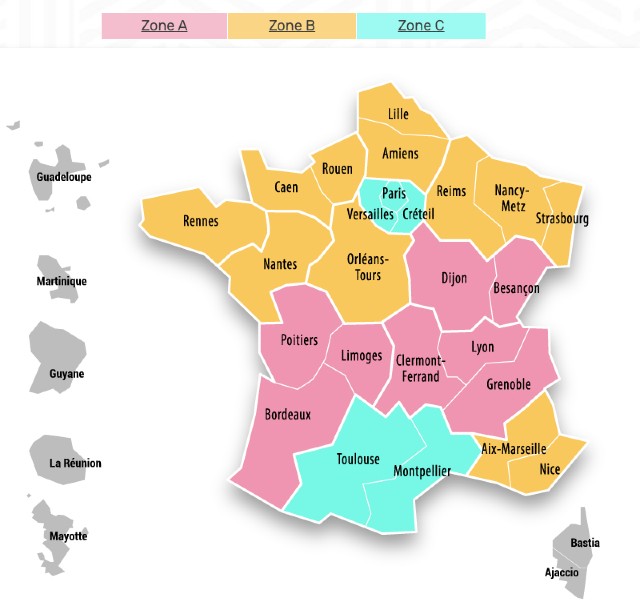 The zones are created so that they have a roughly equal number of pupils each. So although Zones A and B seem much larger, zone C contains the greater Paris area, by far the most densely populated place in France.

The zones have a vague logic as dividing France into three horizontal stripes with Zone B in the north, Zone A in the centre and Zone C in the south . . . except for the small matter of Zone C also including the Paris region and the ‘northern’ Zone B encompassing Marseille and Nice.

Oh, and Corscia sets its own holiday dates like the French overseas territories do, even though it’s a part of mainland France for all other administrative purposes.

There have been several reorganisations of the zones over the years as demographics shifted, the most recent being in 2015.

Some French schools do Saturday morning classes to school holidays always officially start on a Saturday, even if most children break up on Friday afternoon. For the full holiday calendar, click here.

If you have a question about any aspect of life in France, email us at [email protected] and we will do our best to answer it