The French vaccine programme has got a little quicker, but still needs to speed up. Photo: AFP
The Local
[email protected]
@thelocalfrance


France is vaccinating against Covid-19 "at a brisk pace", according to Prime Minister Jean Castex, writes John Lichfield.

“From now on, (the vaccination programme) will dépoter (rock, swing or hum) according to the health minister, Olivier Véran.

Really? So far the French vax roll-out has been more “hmm” than hum.

I criticised the glacial first week of the vaccine roll-out from December 27th. I praised the efforts made to speed up the programme from mid-January. Over 1,500,000 injections were delivered by the end of last month – a 50 percent improvement on a very modest target.

Now the French programme has fallen off the pace again, compared not just to self-satisfied, soar-away Britain but also to Denmark, Italy and other EU countries

Castex promised last Thursday that there would be 4 million injections – both first and second doses – in February. That would demand 142,857 shots a day. In the eight days of the month so far, France managed 700,000 injections – or 87,500 a day, just over half the promised rate.

Italy, Germany and Spain have now more fully vaccinated people (all doses) than the UK. But hey, the EU's vaccine deployment programme is a disaster. pic.twitter.com/hMGqIftWjU

To achieve the Castex target France now has to average 165,000 shots a day for the rest of February. That means every day, including weekends when French efforts tend to collapse. (There were only 9,207 injections last Sunday).

Britain, with roughly the same population, is vaccinating around 400,000 people a day.

Health minister Véran said on Monday that he “hoped” – now that the easier-to-use AstraZeneca doses were available – to vaccinate all “health staff, firefighters and home helps” in France in the next fortnight.

Really? That, according to my calculation, would mean 2,600,000 people. Even if only 60 percent of them are willing to roll up their sleeves, that would mean 1,500,000 injections. The new plan announced by the Prime Minister last week envisaged only 1,000,000 AstraZeneca injections this month (even though 2,200,000 doses are expected to arrive in France before March).

As ever, the figures are confusing – and sometimes one is obliged to conclude deliberately confusing.

The government blames its stuttering roll-out on the pharmaceutical companies which have temporarily cut back their promised supplies to the EU – and therefore to France.

That has undoubtedly been a problem. And yet in the first five weeks of its vaccination drive France received 2,653,000 doses – mostly Pfizer and some Moderna – and used only 1,500,000.

I asked the health ministry to explain the huge discrepancy between doses received and the percentage used  – 56 percent at the end of January compared to 80 percent in Italy and 100 percent in Denmark.

The ministry told me that it operates a system of flux tendu (just-in-time) deliveries. It has no strategic or hidden stocks. No doses are held in reserve for second injections.

However, to ensure smooth and secure supplies, there are three different  “reservoirs”: a central bank of doses for care homes; several hundred thousand kept in 100 distribution points for local vax centres; and a “delta” of doses in the process of being thawed.

Does that sound very “just-in-time” to you? Nor me. Nor the government, it seems. The ministry says that it has been  working on ways to simplify the process.

In mid-January doses amounting to 6.6 days of injections were held in the French pipeline. It now holds 4 days. That will fall to 2.5 days by next week, the ministry told me.

If the slow pace was intended to make the roll-out “smooth” and “secure”, it has failed. The regional press teems with stories of poor logistics, unambitious management, cancelled appointment and shortages of staff and needles. 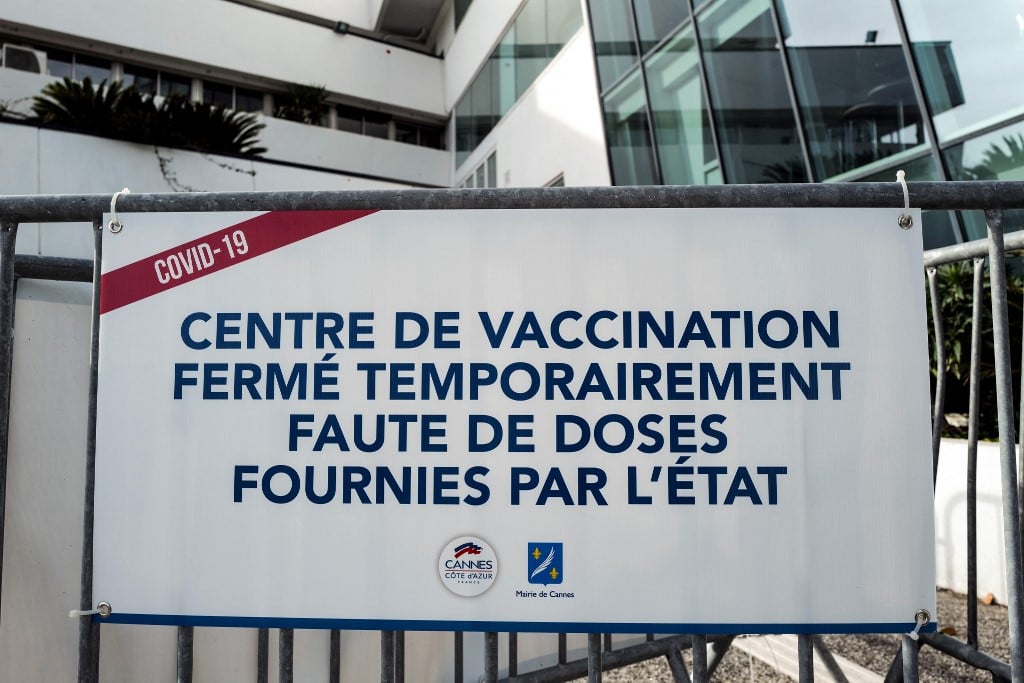 A vaccine centre in Cannes announces that it is closed 'because of a lack of doses supplied by the state'. Photo: AFP

Several areas have been told that they will have no new appointments (other than care homes and health staff) until early March.

Professionals at the sharp end (literally) blame the cumbersome health service administration. Some in the  administration say that France’s high proportion of vax-sceptic health professionals impedes the roll-out.

In theory, there is no reason why things should not dépoter in the next few weeks, as Véran promised. We could see a a re-run of what happened with Covid testing last year. A sluggish initial response by the mammoth French health bureaucracy eventually became fast and efficient.

For the time being the AstraZeneca doses are not approved in France for over-65’s. Hence Véran’s faster-than-anticipated vax programme for all health, emergency and care workers, regardless of age.

From late February the AstraZeneca vaccines should also be available to France’s 20,000 pharmacies to inject anyone aged 50-65 with a potentially Covid-hazardous health problem. As many as 700,000 AstraZeneca doses should reach pharmacies by the end of this month and 2,000,000 in March.

At the same time, the rhythm of vaccination of the over-75’s with the Pfizer and Moderna doses should also increase (up to 1,500,000 first injections this month and 1,400,000 second shots).

That is a lot of “shoulds”. It is time for the French programme to deliver (weekends included). France could still (just about) hit its initial target of vaccinating all willing adults by the end of August.

The other day President Emmanuel Macron, little remarked in the French media, blurred this commitment by saying that a vaccine would be “proposed” to all willing adults by the “end of the summer”.

Does “proposed a vaccine” mean one shot or two? That  remains unclear and deliberately unclear. Using the usual French definition of “summer’s end”, the deadline has quietly shifted, from August 31st to September 22nd which gives an extra three weeks.

Both are possible…but only if someone puts a bomb under the programme. There is no more time for excuses or obfuscations. Covid-19 cases and deaths are relatively stable in France for now but the faster-moving British variant of the virus is spreading fast.

There were complaints on Monday when health minister Véran was vaccinated because he is a neurologist as well as a politician. I have no problem with that. He is right to show the way.

But it is not just Olivier Véran that needs a shot in the arm. If it is to “rock, swing or hum” so does his entire vaccine programme.