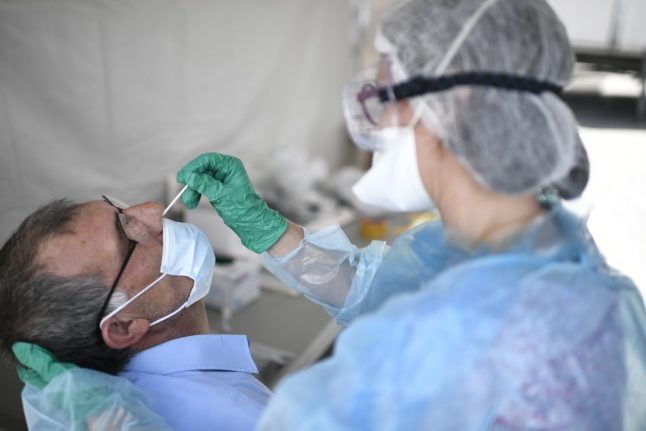 Extensive testing is the cornerstone of France's strategy to lift the lockdown without provoking a backlash in the number of coronavirus cases. Photo: AFP

Faced with a holiday weekend and many people itching to enjoy their newfound freedom outdoors, French President Emmanuel Macron urged his people to remain prudent to avoid a resurgence in the number of coronavirus cases in the country.

“The epidemic is not behind us. Let’s not relax our efforts,” Macron tweeted on Wednesday, the day before many French were to 'do the bridge' and take an extra long weekend over the Ascension public holiday.

A worst-case scenario for France, authorities have repeatedly stress, would be that the lifting of lockdown provoked a new wave of coronavirus cases big enough to overwhelm the country’s hospitals.

This could force the government to slam down a second round of restrictive measures, which would halt the country's effort to revive its struggling economy.

So far, France seems to have dodged such a backlash. While officials stress that it is too early to draw conclusions, things are looking rather optimistic at the moment.

Patrick Pelloux, the president of France's emergency doctor association, said he worried “less and less” that there would be a second wave of infections due to the easing of the lockdown.

“The mathematical modelling allowed the possibility of a rise… with a small peak which was to start now,” he told France 2 television.

“This does not mean that the epidemic has stopped (..), but we are not seeing a second wave coming.”

France these past day has registered less than 100 new coronavirus fatalities a day – a fraction of the over 800 deaths reported daily at the height of the epidemic.

The number of intensive care patients and total hospitalisations have also continued a steady decline, with health authorities confirming 49 fewer people in intensive care on Thursday, the first day of the long-weekend, to make a total of 1,745 patients – compared to more than 7,000 at the peak of the crisis. Testing is the cornerstone in France’s strategy to avoid a second wave of the virus, but on Tuesday France’s Director General of Health Jérôme Salomon said the country was testing only half of the set goal – about 50,000 people a day.

“The question is not to know how many tests we do, but whether the patients in need have access to them,” Salomon said.

“And the answer is yes.”

Pascal Crépey, a virologist and professor at the Rennes School of Higher Public Health Studies (EHESP), told The Local that “you don’t need to test everyone” – just the people who were at risk of being Covid-19 positive.

If testing capacities turned out to be insufficient, the virologist said hospital numbers would begin to rise “by the end of May.”

Since the lockdown was lifted, France has in fact discovered dozens of new coronavirus clusters in the country.

But the goal, researchers say, was never to make the virus disappear. It was to stem the spread to a level that did not overwhelm the country’s hospitals.

“In a perfect world we would be able to perfectly contain the virus, but it is likely that there will be new clusters,” said Claire Chaumont, an instructor at Harvard T.H. Chan School of Public Health in the United States, who specialises in health systems and global health governance.

By switching from a strategy revolving around complete social distancing to attempt to identify and isolate new cases of the virus, Chaumont said the French government was trying to quickly discover any resurgence and “nip it in the bud.”

“It's like little fires that you need to put out,” she told The Local. Chaumont said the success of the French plan hinged largely on people's behaviours, whether or not they continued to respect rules on social distancing, handwashing and other health precautions.

“There is of course a fatigue with all these rules and it will depend on the government's ability to create trust,” she said.

'The feeling of disaster is behind us'

Crépey, whose recent research has revealed the lockdown's major success in containing coronavirus death rates in France, said the new and extensive testing would be crucial to discover and prevent a new backlash.

“If the effort fails, we will see an increase in the number of hospitalisations by the end of May,” he said.

He sketched out two possible scenarios for the coming months:

“Either we will see a few new clusters and sporadic cases, and life will slowly go back to normal,” he said.

“Or, we will have a more complicated situation of high circulation in certain areas followed by lockdown measures, and loosen restrictions where we can.”

This kind of locally based “stop-and-go” approach was more likely than another round of strict, nationwide lockdown, the virologist said.

“The feeling of disaster catastrophe is behind us. No one wants to experience that nightmare again, ” he said.

“If we maintain social distancing, take the necessary precautionary measures and prevent large crowds, we should be able to maintain the contamination rate at a manageable level.”