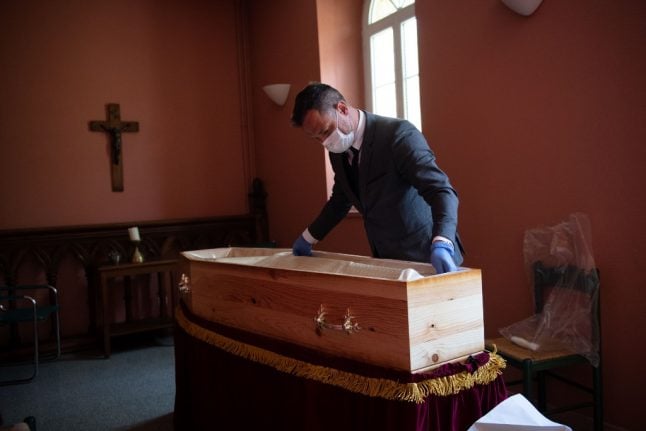 The département of Seine-Saint-Denis on the northern edge of Paris shows an increased death rate of 130 percent for March 1st to April 20th, compared to the same period last year.

Meanwhile some French départements have actually shown a decreased rate of deaths compared to last year and the nationwide excess mortality – which encompasses all deaths not just those attributed to coronavirus – is 27 percent higher than 2019.

The highest single increase is in the eastern French département of Haut-Rhin, where the outbreak first began, and the next highest five are all in the greater Paris Île-de-France region with the département of Seine-Saint-Denis showing an increase of 130 percent on 2019.

The Paris region is still a red zone for coronavirus and has been hard hit by the outbreak, with the excess deaths also more than double in Hauts-de-Seine (+ 122 percent), Val-de-Marne (+ 104 percent), Essonne and Val-d'Oise (+ 99 percent each).

So why has Seine-Saint-Denis been so hard hit? French health authorities say there are three main factors that together have created a 'perform storm' for the area. Many of Paris' low paid but essential workers live in the suburbs. Photo: AFP

While millions of people stayed at home during the lockdown, those in essential jobs were still travelling to and from work every day, and Seine-Saint-Denis has a high number of essential workers.

Sky-high property prices in Paris mean that many people who do low-paid but crucial jobs such as nursing staff, transport operators, supermarket workers and street cleaners live outside the city in the cheaper suburbs and commute in.

Of the working population in Seine-Saint-Denis, 12 percent continued to travel to work during the lockdown, compared to seven percent in Paris.

During the lockdown, when the Paris public transport network saw just four percent of its usual traffic, the highest passenger numbers were in Seine-Saint-Denis as people travelled to work.

Isabelle Grémy, director of the Île-de-France regional health authority, said: “They are all those who have ensured the smooth running of the system during this period of confinement. Seine-Saint-Denis, often known by its département number as le neuf trois, is the most deprived département in France, with high levels of poverty, crime and poor housing.

And it is the housing conditions that have proved disastrous during the coronavirus outbreak, with crowded living conditions meaning that anyone who did get the virus was highly likely to infect others.

In the département more than a third of people live in housing with less than one room per person.

“In these circumstances barrier gestures are much more difficult to put in place.

“And even when they are respected, the many common areas that are very busy are unquestionably risk factors for transmission.”

Crowded living conditions made the lockdown particularly difficult and tensions also flared over police enforcement of the lockdown, with several nights of running battles between police and locals after a motorcyclist was seriously hurt during a police stop.

The two factors above explain why so many people contracted the virus, but to explain the death rate there is an important third aspect – poor overall health.

Since well before the coronavirus epidemic Seine-Saint-Denis residents were in poor overall health, with many of the problems often associated with poverty such as diabetes, obesity and hypertension – all major risk factors for coronavirus.

The area has also been identified as a 'medical desert' where a shortage of doctors means that people struggle to access care and life expectancy in the département was up to eight years shorter than in more well-off areas.

Even within the département there was a wide variation on the death rates with the more deprived northern areas of Plaine Commune and Paris terres d'Envol recording excess death rates of 169 and 154 percent, while the eastern part of the département saw a 56 percent increase.