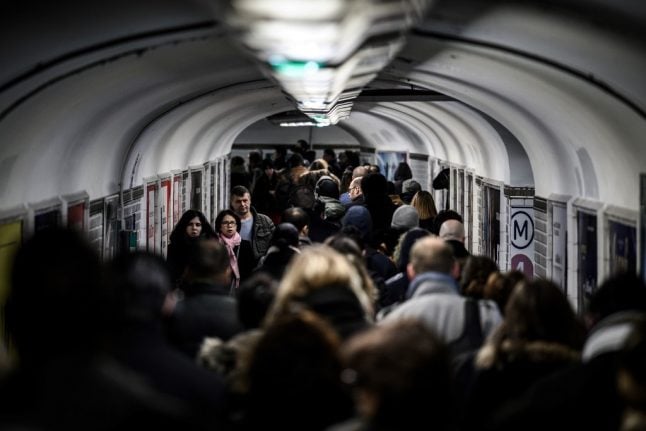 Unions on the capital's public transport network announced on Thursday that they would continue their strike at least until the end of Tuesday, December 17th, but it seems that more of the employees are returning to work, as there is a significant increase in the number of services running on Friday.

On the Metro, lines 1 and 14 – which are automated – continue to run as normal as they have been doing throughout the strike (with some extremely crowded services – the pictures and video below were taken at Châtelet station during the morning rush hour on Wednesday and Thursday).

But several other lines are also back running, albeit with reduced services.

On the tram network four services are now back to normal – 2, 5, 6 and 8 – while 7 is running all day, but with a reduced service. Lines 1, 3a and 3b are running morning and evening only, with reduced services.

The RER suburban train services are still running a reduced service at rush hour only, but on the buses half of all the usual services are running on Friday.

Although before anyone gets too optimistic, services at the weekend are again likely to be minimal as RATP concentrates the resources it has on getting commuters to work and back.

Full details will be released at 5pm on Friday.

If you're planning a trip to Paris for the weekend and want to come by car, it's worth noting that Paris traffic – especially during rush hour – has been considerably heavier than normal during the strike, especially on the outskirts of the city, so it would be wise to plan ahead and try to avoid the busy times. On the railways across the country the situation is largely the same, with around 80 percent of services cancelled.

Overall 25 percent of high speed TGV trains are running, and roughly the same number of Intercité services, but the TER local trains are the worst hit with just four in 10 services running, many of those with replacement bus service.

Flights are again unaffected and although blockades continue at some oil depots around France, supplies of fuel are still getting through.

There are still quite a few petrol stations around the country that are either low on fuel or closed though – so check this interactive map before you set out and make sure you fill up the tank when you can.

Friday is not a 'demo day' so there are no protests or marches planned, instead unions are concentrating their efforts on another 'day of protest' which has been called for Tuesday, December 17th.

This day might also see some more one-day strikes by unions such as teaching unions, which are fiercely opposed to the government's pension plans but have not declared unlimited strikes in the same way as the transport workers.

While there is no immediate end in sight to the conflict, France's finance minister Bruno le Maire struck a conciliatory tone on Thursday, telling a French radio station that there was “room for negotiating”.

Anyone pinning their hopes on a collapse in support for the strikers among the French population is likely to be disappointed, however, as a poll by the Elabe institute released Thursday found France evenly divided over the pension reforms, with 50 percent of respondents approving and 49 percent against.

But the poll also found that 54 percent rejected the proposed “pivot age” of 64 for a full pension, and 54 percent supported the unions' protest.