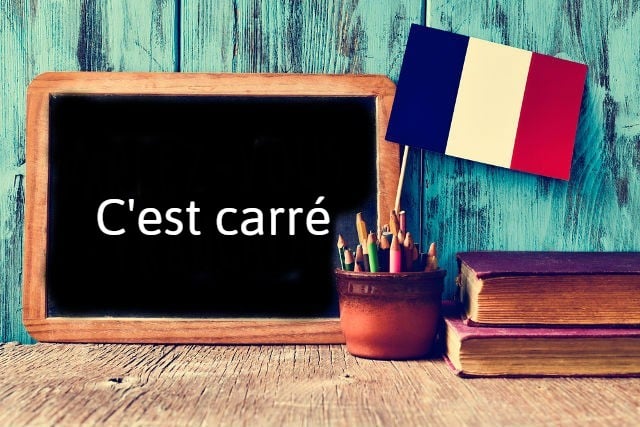 Why do I need to know carré?

Because no one wants to be a square, right?

While carré literally means ‘square’ – so can be used in the literal sense of metre carré (metres squared) if you are talking about the size of your Paris apartment –  it is also something you can call a person, but it doesn't have the same meaning to call someone a square as it does in English.

If an English-speaker at a bar calls you ‘square’, it means that he thinks you’re boring and probably should have another tequila shot.

But if your French nephew says you’re carré, don’t be insulted. In France, carré is used to show that something is clean and clear, like the perfect square shape.

This French joke (unarguably such a dad joke), actually makes a good point. Knowing the history of carré helps in understanding how to use it in a conversation.

Carré was first made popular by the French rapper Moha La Squale who featured the expression as a gimmick in nearly all of his songs.

When something is carré, everything goes to the plan: c’est propre. C’est reglo. C’est carré. – It’s sorted.

J’avais peur de rater mon train mais j’ai pu l’avoir juste à temps et je suis dedans. C’est carré. – I was afraid I might miss my train but I was able to get in just in time. It's sorted.

You can also use it about a person. If you say that someone is carré, it means they're pretty damn good.

If you want to recommend someone to a friend for a job, you might say:

Or if  female friend is worried about a guy she's dating, but you know he's a keeper and want to vouch for him you might say:

Young people sometimes use it instead of ça marche or ça roule, which you might know to be the English equivalent of 'alright' (you can read about ça marche here and ça roule here.)

But none of these expressions come close to the hipness of carré.

So it seems that Huey Lewis and the News were right way back in 1986 when they insisted that It's Hip to be Square.