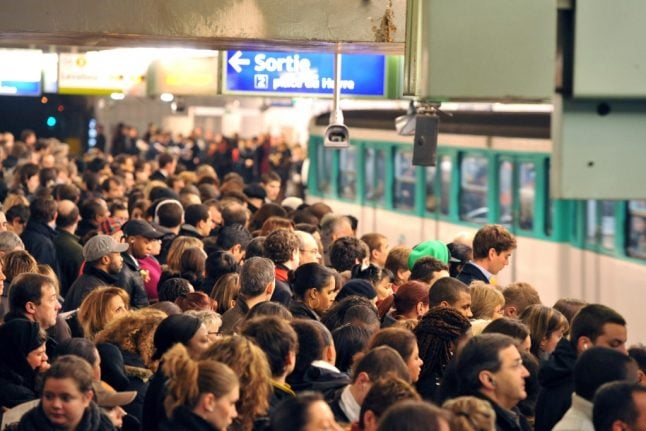 Yes the Paris Metro is crowded, and getting busier each year. Photo: AFP

The number of passengers the Metro and RER carries each year within the capital now stands at a staggering 1.8 billion, according to data from the RATP Paris transport authority.

And that figure is likely to grow, if current trends are maintained.

READ ALSO Revealed: Which Paris Metro and RER lines are the most punctual He told Le Parisien, which revealed the RATP figures, that a Metro line is considered overloaded when there are more than four passengers per square metre.

The RATP figures show that some Metro stations have had a massive increase of people arriving there to take the train.

Mairie de Montrouge station, the terminus of Line 4,  tops the list, with a whopping 142 percent increase over the past five years.

A total of 7,081,319 travellers started their journey there last year, compared to just under three million in 2013.

Next is Front Populaire, on Line 12, which saw its numbers jump by 93 percent over five years, going from 1.5 million to nearly three million.

Such dramatic increases are usually due to the stations being linked to new tram lines or being near new office building developments.

The RATP figures are for the Paris city area, but the entire public transport system in the wider Paris region is also expected to show a large increase in passenger numbers, according to Le Parisien.

It is believed the figures will show a rise of 10.5 percent from 8.5 million eight years ago to 9.4 million last year.

There are also works on going to extend several Metro lines further out into the suburbs to enable more people to use the service for their daily commute.