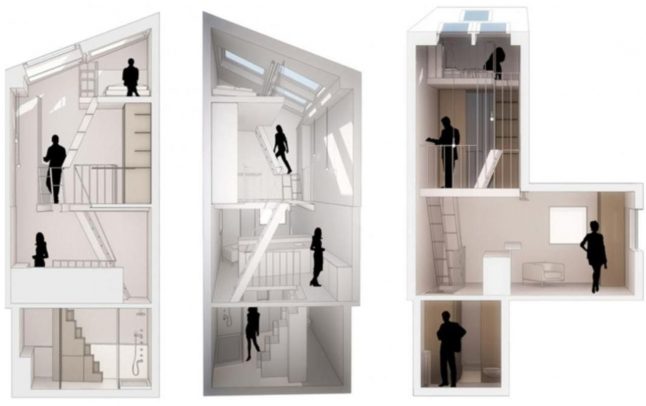 As anyone who has ever tried to find a place to live in Paris will know, the capital's housing market is a very weird place, where landlords will happily charge you over €1,000 a month for something barely bigger than a shoe box.

But now two architects have come up with a novel solution to the general lack of space in the city – a house renovation that offers just 25 square metres of space – but over four separate floors, each one representing a room: bathroom, kitchen/living room, office and bedroom. This ingenious design is the work of Marc Sirvin and Clémence Eliard, two architects who decided to revamp an old, dark and narrow building near Hôtel des Invalides in the 7th arrondissement.

Their place is fully kitted out with useful kitchen appliances such as a dishwasher and an oven as well as custom-made cupboards and draws.

As the photos show, a metal grid floor installed in the middle floors means light can reach pretty much every corner of their “quadruplex”. The living room takes up the majority of the space: 15 sq m as opposed to just 3 sq m for the bathroom in the basement.

“Everything has been optimised,” Sirvin told French newspaper Le Parisien.

Even the staircases double up as storage space with their own hidden closets.

The couple is however quick to admit that the building isn’t exactly toddler-proof or ideal for families, having only one bedroom where you can't stand up, very steep stairs and a general lack of space.

“It's suitable for a young worker, a student or someone who’s starting their career,” Sirvin says.

It took the pair four months to revamp their home, costing them around “€3,000 per sq m”.

Not bad considering that in September the average cost of property reached a symbolic €10,000 per sqm mark in the French capital.

In fact, over the last ten years, the cost of buying in Paris has risen by 62.5 percent.

The shortage of apartments and the high demand for rentals has lead to some landlords to take advantage.

In 2018 a French housing charity revealed that a 71-year-old man had for 25 years been living in an apartment that was just 5 metres square – and had only one metre square high enough for him to actually stand up.

In Paris it is illegal for landlords to rent out apartments that have less than nine square metres of habitable space – defined as a space high enough for an adult to stand in – but the fact remains that some do flout these rules.