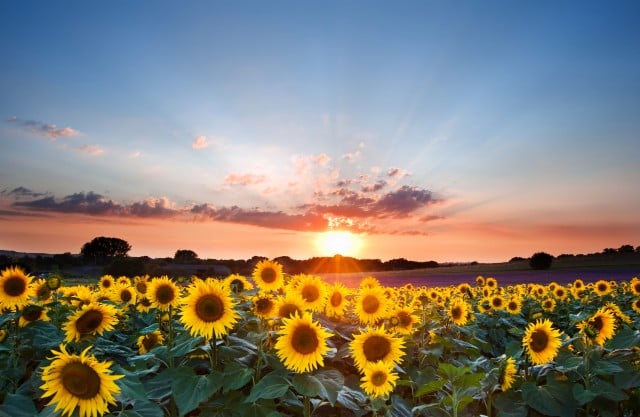 Rural Charente. Photo Photo: Venaratio/Depositphotos
Where in France do you live and how long have you lived there?
I actually live in Paris, but whenever I can I escape the metro boulot dodo of the city and go to my favourite bit of France – the Charente. The northern part of the Charente, near the town Ruffec (see map), is particularly lovely – rolling fields of maize and sunflowers dotted with hundreds of tiny little villages.
With a relatively central location, the Charente is well connected. Map: Google
What is the best thing about life in your part of France?
The peace! It's beautiful and calm and if you want you can walk for miles without seeing anybody. But if you know where to look there's always something going on and a surprising amount of gossip (which discretion forbids me from mentioning here).
At the same time we're also well connected – just over two hours on the train from Paris or an hour and three quarters to La Rochelle or the Vendée coast, home of the best oysters in France.
And while we're not quite as sunny as the Languedoc or the Dordogne, the weather is generally pretty decent and it's possible to make the journey to the UK in a day if you want to. Property is cheap if you don't mind putting a bit of work in and once you're there you can find great bargains at the brocantes (vintage markets that are less expensive than antique markets but which offer a great selection of old furniture, household goods and clothes). The lively city of La Rochelle, home of a good rugby team and a cliff diving championship, is nearby. Photo: AFP
What has been the highest point so far – the moment you knew you had made the right move?
Hacking back the six foot jungle in the very overgrown garden to discover a fig tree – covered in perfectly ripe figs. Then picking the figs and eating them for dinner with goat's cheese and a bottle of white wine.

Figs picked straight off the tree plus cheese from a local goat has got to be a contender for best lunch ever. ❤ Charente pic.twitter.com/7czFBZ6Rp2

And the lowest point?
As anyone doing a renovation will know, passions can run high during a project and occasionally this can lead to screaming rows when neither of you understand the French fitting instructions for the very expensive windows you have just bought, one of which is broken. But we'll draw a veil over that little episode.
What is the one thing you wish you knew before you moved there?
Sunday closing! Well I did know that this still exists in rural France, but I can't seem to retain the information and have had a few hungry Sundays. Fortunately the wine has never run out, that really would be a catastrophe. Also, if there's no boulangerie in your village, you need to buy twice as much bread as you think you do every time you visit the town.
What is the best local restaurant?
Auberge le Saint Jean in Nanteuil-en-Vallée and L'Etoile d'Or in Villefagnan.
And the best store or market?
Endless local brocante markets are a bargain-hunter's dream.
And the best place to visit in the area?
It's actually just over the border in Haut-Vienne, but Oradour-sur-Glane is an extraordinary site – devastating, emotional, sobering and oddly beautiful. Everyone should go there at least once in their life. The 'martyred village' of Oradour-sur-Glane. Photo: AFP
What is your favourite local food or drink?
Pineau des Charente, a fortified wine generally served as an apéritif, is the perfect start to a meal, served chilled, but I also like it in winter, at room temperature, as an after-dinner digestif. We're generally spoiled for choice for booze in Charente, it's a wine growing region which means there are dozens of local wines to try and the town of Cognac is just down the road.
Tell us something about your part of France that people might not know?
It has one of the largest dinosaur excavation sites in Europe. Over the last 10 years, 7,500 bones from 56 different species have been excavated at the 140 million year old former marshland near Cognac.
Show us some photos of where you live: The Chateau de Verteuil. It's magnificent and it also has an excellent tea shop. Photo: Depositphotos.com Blue skies above the fields. A classic pic of Charente. Photo: Joe Taylor/Flickr
Get involved! We want readers to tell us about their corner of France. Simply fill in the questionnaire below and email photos to [email protected]
Loading…