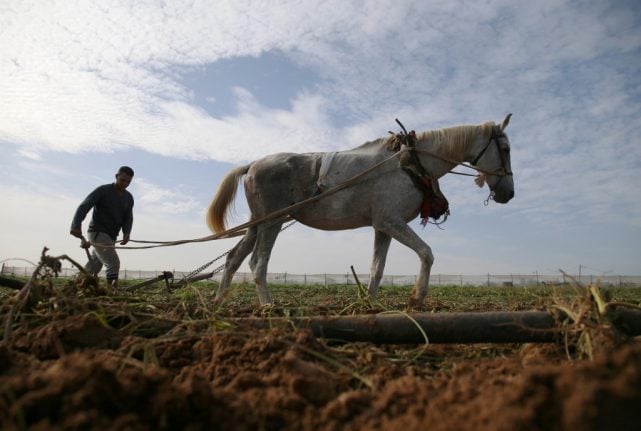 Sésame, the horse owned by Marie and her brother Jean-Paul Zusslin of the Valentin Zusslin vineyard in Alsace, is currently awaiting a legal judgement on November 18th.

Since 2012, the Zusslins have been using Sésame for ploughing and to transfer crates, as part of their biodynamic philosophy.

When Sésame is not in the vineyards, he sometimes grazes in a small meadow in the heart of the village and in the direct vicinity of a country cottage.

And what goes in must go out.

The owners of the neighbouring cottage feel much aggrieved by Sésame’s output, namely “the smell of manure and urine, the massive presence of flies and the horse noises”. The couple directly links this to a decrease in the number of visitors to their rental cottage.

However, the Guebwiller District Court rejected their claims on July 3rd 2018, on the grounds that “the inconveniences caused by this presence do not exceed the usual inconveniences of the neighbourhood”. The plaintiffs chose to appeal this decision and the case is due back in front of a judge on November 18th.

This is the latest in a long line of bizarre legal rural battles often involving animals. And the animals normally win.

There was a similar situation in the small village of Sallèdes, in the Puy-de-Dôme region, in 1995. The nuisances associated with chicken farming had pitted a chicken farm against a neighbouring couple, who considered the hens “too noisy and smelly”, says Le Monde.

The owner of the henhouse won on appeal, as the judge declared “the hen is a harmless and stupid animal, to the point that no one has yet managed to train it, not even a Chinese circus”.

There were also the randy frogs making too much noise in a pond in the Dordogne. Then a tourist found church bells too loud and appealed to the mayor in Lozère to stop them ringing during her two week holiday. And then there was the case of Maurice, the rowdy rooster. His owners successfully defeated a court case filed by unhappy neighbours.

The owners of the Zusslin estate launched an online petition on September 16th to fight for Sésame. It has already collected more than 15,000 signatures.

“Before the horse, it was the sound of our air-conditioning and the church bells ringing too loudly…”, says Marie Zusslin.

For her, “this problem highlights a lack of openness and tolerance” that is a characteristic of the time. “It's a fight of principle against people who want to stop us from working in the way we believe is important”.

For their part, the neighbours say that the media have distorted their case.

“What bothers us are the horses under our windows. Our guests could no longer eat outside,” explains neighbour Laurent Holer. “We have nothing against horses in the vineyards, quite the contrary”.

Since the media became interested in the subject, “the field has started to be clean,” he admits. “As it stands, we would no longer be suing. But it had become intolerable.”