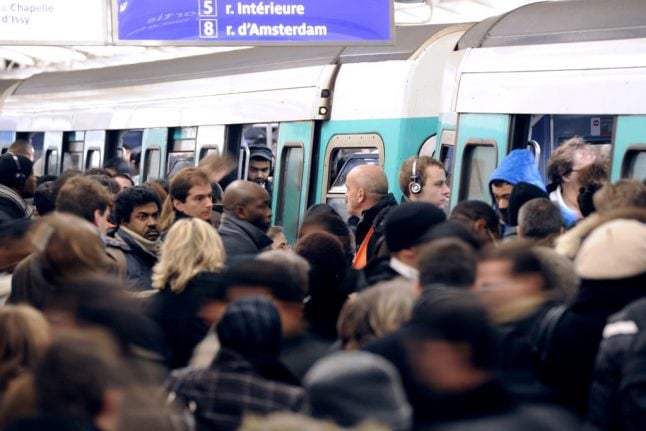 Major disruptions are expected on the Metro on Friday. Photo: AFP

READ ALSO Metro chaos: All you need to know about the Paris public transport strikes

All of the unions on the Paris transport network have declared that they will be taking strike action on Friday in a protest over plans to reform the pension system.

RATP, which runs the Paris Metro, bus and RER suburban train network, has advised people not to travel on Friday unless absolutely necessary.

The company will release full details of the disruption to services later on Wednesday, but is already warning that the disruption is likely to be severe.

It is believed that some Metro lines will be closed completely, while others will operate a very limited service.

The RER suburban trains and the bus system will also be affected.

The strike action is expected to be particularly severe because all the unions that have members among the transport workers – CGT, UNSA, CFE-CGC, Sud, Solidaire and FO – are coordinating their action.

At present the advice from RATP is: “There will be very severe disruption on the transport network on Friday, September 13th. RATP invites passenger to keep their travel to a minimum.”

The strike is the first in a series of actions planned to protest against Emmanuel Macron's proposed reform of France's pensions system.

This will particularly affect transport workers, who at present enjoy a generous pension system and have certain exemptions for early retirement, such as Metro drives who can retire on full pensions at the age of 55.

Bertrand Hammache, General Secretary of CGT RATP union, told France 3: “The purpose of having a special [pension] regime is first of all to take into account the difficulty at work. The workers are confronted with night schedules, working in the underground and handling toxic products.”

He added: “We have many more strike declarations than usual. We have Metro lines that will be interrupted during off-peak hours in particular. We have not seen such an important mobilization in a long time.”

READ ALSO ANALYSIS: Buckle up for a rocky few weeks as France begins to reform pensions