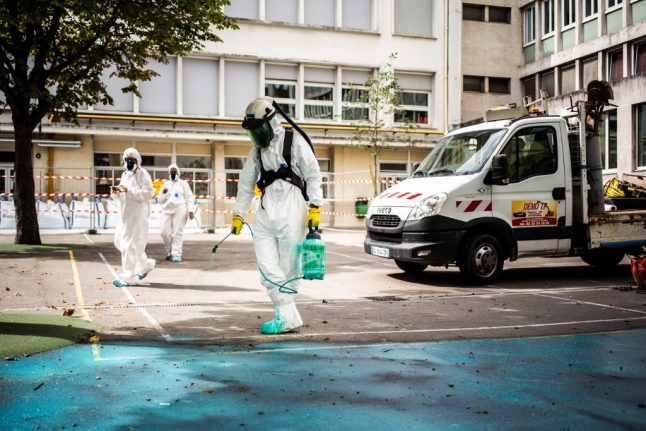 Workers sprayed a gel on the ground to absorb lead at Saint-Benoit school near Notre-Dame last week. Photo: AFP

Why is it necessary?

Over 400 tonnes of lead in the roof and steeple melted during the fire which tore through the cathedral. Those lead particles were carried through the air in a cloud of smoke, before settling on streets and buildings in surrounding areas.

Renovation work was halted last month over fears that workers could be exposed to lead poisoning, after testing revealed dangerously high levels of lead contamination at the site as well as at nearby schools and other buildings.

Last week, the city posted the results of a new round of testing at the schools and daycare centres in the immediate area, showing less than 70 microgrammes per square meter – the level generally considered safe.

But it also revealed that some schools and daycare centres beyond the 500-metre perimeter still showed isolated readings on playgrounds or windowsills of more than 1,000 microgrammes.

Why did it take so long?

After weeks of saying residents were not at risk, Paris authorities suddenly shut two schools on July 25th that were running summer holiday programmes for children after tests found dangerous lead levels. Hundreds of tonnes of lead in the roof and steeple of the cathedral melted during the April 15th blaze. Photo: AFP

That prompted a lawsuit from an environmental group alleging that officials had failed to quickly contain the contamination risks, while others accused the city of failing to notify the public about the alarming test results.

Last month, the regional health agency ARS released the results of tests conducted on 82 children who live on Île de la Cité – the island in the middle of the Seine where Notre-Dame stands. Ten children had lead levels of between 25-49 microgrammes per litre of blood, which is considered above the “vigilance threshold”.

Ingesting lead particles can cause neurological defects as well as nervous system and kidney problems, according to the World Health Organisation.

Small children are considered the most vulnerable, since they are more likely to touch contaminated objects and then put their fingers in their mouths, but pregnant woman can also be at risk. Access to the roads surrounding Notre-Dame cathedral will be limited from Tuesday 13 August. Photo: AFP

Speaking to LCI television, deputy mayor Emmanuel Gregoire vowed the sites would be “rigorously cleaned” before the school year resumes in September, and would welcome children only if approved by the ARS.

How does the decontamination work?

Last week workers dressed head-to-toe in white hazmat suits sprayed a blue-green gel onto the playground at the two closed schools on the Rue Saint-Benoit. According to city officials, the gel attracted and trapped the lead particles on the ground as it dried, and was later removed with high-pressure hoses.

This procedure and others will also be used on the square in front of Notre-Dame and on streets in the immediately vicinity.

Which areas are inaccessible?

Access to the roads surrounding Notre-Dame will be restricted, Paris police announced. Vehicles will not be able to access Rue de la Cité, the Pont Cardinal Lustiger (also known as the Petit Pont), or the Quai du Marché Neuf from the police headquarters to Rue de la Cité.

The forecourt of the cathedral is closed to pedestrians, as are Rue de la Cité, the Pont Cardinal Lustiger, the Pont Marché-Neuf, and the passage between Rue d'Arcole and Rue de la Cité.

These restrictions will remain in place until August 23rd, as workers undertake the first of three phases in the clean-up operation.