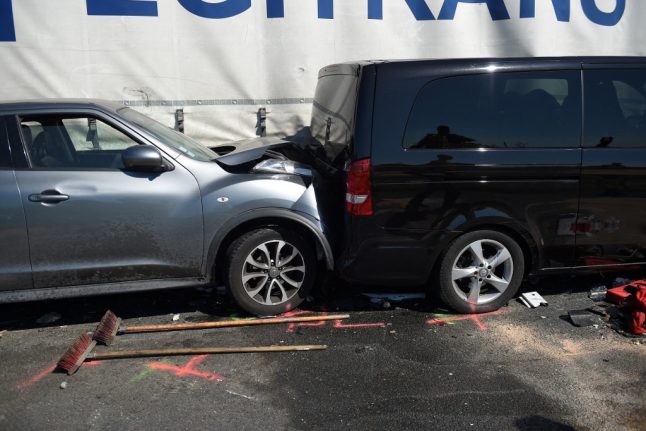 The cost of a car insurance policy in France can vary widely, but one thing is certain – they are going up.

Experts in the business say car owners will pay one to two percent more for their cover in 2019, but foreign drivers can end up paying a lot more than their French counterparts. In case of an accident you will need to be correctly insured. Photo: AFP

Especially those who are unable to provide proof of no claims, known in France as Bonus Malus, which helps reduce the cost of the insurance policy.

But there are things you can do to try to reduce the overall price of the insurance policy.

It sounds obvious to say it, but it's worth getting quotes from various insurers. A price comparison website like lesfurets.com or meilleurassurance.com  is popular and worth checking out.

But it's not just for those looking for first-time insurance that you'll need to check the competition.

In January 2015 a new consumer rights' law brought in by former minister Benoit Hamon meant that customers can change insurers easily when the contract ends after a year.

In the past it used to be that customers would have to enter a bureaucratic torment to change insurers, which involved lots of letter writing. But the 2015 law allows customers to simply cancel the contract and pick another insurer that might offer a better deal.

The law was introduced by the government with the idea of increasing competition and driving down prices.

According to Christophe Triquet from Meilleurassurance.com, the law is helping with around 18 percent of customers now ditching their insurance company after the first year of the contract.

Insure by the kilometre

If you’ve perhaps retired in France and won’t be doing any long-distance trips, or if you’ve settled in a big city where public transport is normally the way forward, then insuring by the kilometre could be a good option for you.

Normally, if your car isn’t travelling more than 8,000 kilometres a year, you can benefit from up to 50 percent off at certain providers, or more if you drive less.

According to the site Capital.fr a driver who covers 2,000 kilometres a year in a Renault Clio could pay as little as €199 per year on an insurance policy that is calculated per kilometre compared to €371 on a classic policy.

Hidden clauses and extra costs won’t be a new thing for anyone who has insured a car before.

As usual, in France, it’s important to read through contracts and keep an eye out for any avoidable costs your insurer has tacked on that don't serve any purpose.

For example, many add a protection juridique which allows you to benefit from a lawyer in a case of litigation. However, costing an average of €60 per year, it’s a clause that would only ever be useful if a case was brought to court.

There are likely a few other “benefits” in your insurance police that you don't really need and could negotiate to have taken out.

If you’re only just realising that these costs are in your contract now, you can still negotiate with your insurer.

Christophe Triquet of Meilleureassurance.com states: “Be aware that even long-term clients can normally negotiate with their insurances for better-adapted clauses to fit their needs, without completely changing the fundamental contract.” Pay all at once

When you get a quote for your policy you will likely be given two prices one for if you pay in one lump sum for the 12 months and another if you pay monthly.

If you have the money to pay for 12 months all at once, it could well be wise to do so.

As daunting as the bigger figure may be, paying by the month can increase your overall price by 5-8 percent.

As much as your car insurance is there to help out in case of an accident, sometimes it might be better to play the long-game.

If you experience a minor accident, scratches or broken lights for example, it could be cheaper to pay for repairs and avoid a potential 25 percent rise in insurance price for a small incident that is judged to be your fault.

The newer a car, the more it costs to insure. That’s the general rule of thumb.

The less power a car has and the longer it has been on the road, the lower its insurance price. A good option for those non-petrol-heads who see driving as a means of getting from A to B – invest in a less snazzy set of wheels.

Note that if you have an older car it might not worth going for the top level of insurance, known as tous risques.

Third-party fire and theft cover called au tiers illimité or tiers complet is a cheaper option and given that your car is not new and insurers will only pay out the market price for older cars it might be the best option.

If you’re looking to insure a young driver in France, there are a few things you can do to lower costs.

The “conduite accompagnée” is a driving school scheme that can see car insurance price reduced by 25 percent each year, installing a dashcam can bring the price down by up to 30 percent and signing onto the same insurer as their parents can sometimes mean a 10 prcent loyalty discount.