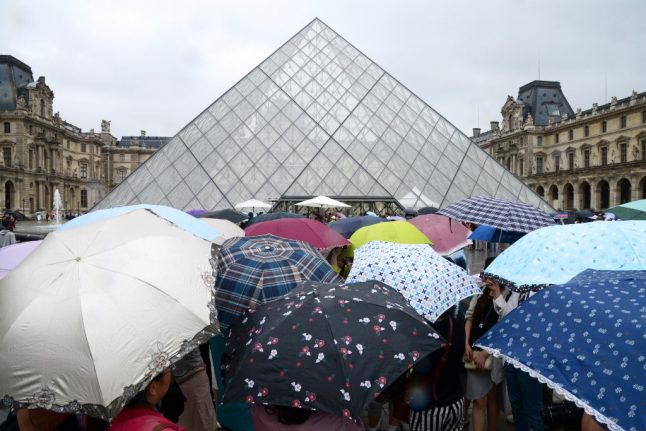 The hugely popular Louvre in Paris did not open its doors on Monday after the museum's reception and security staff announced they were staging a walkout due to overcrowding and a decline in the number of staff.

CGT-Culture National Secretary Christian Galani said that workers had made the decision after a discussion of grievances during a training session on Monday morning.

Thousands of tourists queuing outside the world famous museum – which houses the Mona Lisa among many other works – were left disappointed.

In a statement the Sud Culture Solidaires union said: “The Louvre is suffocating” and that staff members have noticed a “deterioration in conditions for visitors and workers”.
READ ALSO:

Due to a recent increase in visitor numbers, members of the Musée du Louvre’s Reception and Security staff are exercising their right to strike. The museum will therefore remain closed all day today (May 27, 2019).

Why exactly are the unions and staff angry?

“This represents an increase of 20 percent since 2009, but the palace has not grown,” said the union, adding that during this time the number of staff members has decreased.

The union claims that since 2009, visitor number have increased while staff numbers have dropped from 2,161 to 2,005.

The union said that staff members are “dismayed” by the “shameful image we give of our establishment”, adding that the overcrowded conditions are a danger to the public.

“But to date, no urgent, concrete measures nor any solutions have been brought to us,” said the statement, adding that the staff are forced to deal with visitors who are angry about the conditions of the Louvre

“What to say about visiting conditions when people are confronted with noise, trampling, crowds, extreme fatigue and the total inadequacy of museum facilities when there is such a high volume of visitors? We refuse to continue to be insulted by the angry public!”

Since the beginning of the year, the union says, the museum has welcomed an average of 100,000 more visitors a month, putting the average number of visitors per day at 40,000.
“And this is just the beginning! We all know that the season is just starting.” Photo: AFP
What are the unions demanding?
The union said on Monday that it wanted the Louvre to employ the right number of staff for the job, and a “rapid introduction” of a regulation that only allows a certain number of people into the building at any one time to meet security requirements.
“And beyond this immediate necessity, the Louvre must be part of a deep reflection to redefine our mission. Get out of mass tourism, stop the establishment from turning into a cultural Disneyland, to offer a culture of quality for all, this is the challenge of these decisions!”
How long will it go on for?

The staff have decided to return to the job for the time being, after management proposed taking steps to improve the situation.

Christian Galani told The Local that employees discussed management's proposals during a lively general meeting Wednesday morning, and ultimately decided to give them a try.
The measures included the implementation of a system of mandatory reservations, the hiring of an additional 30 staff members and spreading out the calendar of numerous construction and renovation projects, which employees say increase tension and crowding in the museum.
What have the Louvre management said?
The management of the Louvre said that after Monday's closure and the late opening on Wednesday, opening hours are back to normal. However, the museum's Twitter account is strongly advising people to buy their tickets in advance online, saying that only pre-bought tickets will guarantee entrance to the museum.