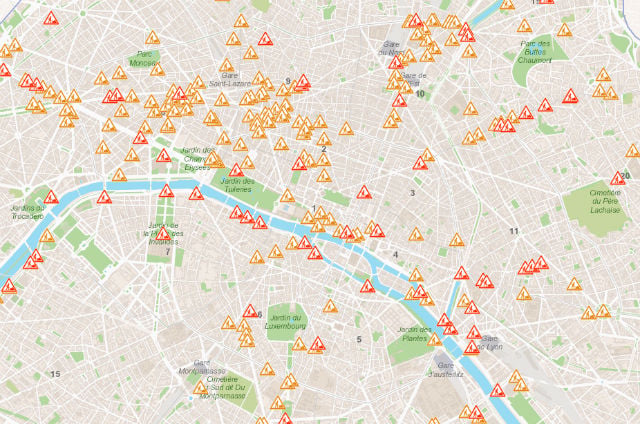 Construction sites have sprung up all over Paris. Photo: Ville de Paris

It might be spring but it isn't only flowers that are in full bloom all over the French capital.

For months, major construction work has picked up all over the capital, along with the garish green and grey barricades that accompanies it.

And beyond the ugliness – not to mention the noise – it has been causing practical problems for the city's residents trying to go about their daily lives.

Here's a look at the works that are taking place and why. There are currently 6,079 construction sites in Paris, including for cycles lanes, squares, underground pipes and tramways.

However, according to the City of Paris, of the 6,079 works, only 459 – or seven percent – have been commissioned by the City.
Apparently, 2,164 of the construction sites are being carried out by other companies in charge of maintaining the city, including heating, gas and electricity companies while 3,461 sites are being carried out on privately owned buildings, with the scaffolding adding to the eyesores around Paris.
City Hall is claiming responsibility for the reorganisation of the road network: “The Paris of the 21st century will not resemble the Paris of the 20th century, which was car-centric. The current construction sites are testament to that,” said Christophe Najdovski, who works in the transport and travel department of the town hall.
The goal is to redevelop seven large areas of the city, including Place de la Bastille according to the bike plan, making the city more accessible for cyclists and better suited to pedestrians.

How will the roadworks improve life for cyclists and pedestrians?
The redistribution of public space for pedestrians and cyclists has been the common factor in the major roadworks undertaken across the French capital since 2014, according to the town hall.
“The redevelopment of seven large squares (Bastille, Pantheon, Madeleine, Nation, Italy, Fetes and Gambetta), will result in 50 percent more space for pedestrians and cyclists,” deputy Paris mayor Emmanuel Grégoire told the French press.
The bike plan is set to increase the city's cycling facilities, such as tracks, strips, bi-directional cycling and river lanes from 700 km (back in 2015) to more than 1,000 km in 2020. Photo: AFP
According to the authorities so far “145 km of cycling facilities have been completed”.
The creation of bike paths is currently ongoing on rue de Rivoli, and boulevards Sebastopol and Strasbourg.
The transport authorities have said that “the opening in the summer of 2019 of a two-way cycle path in the Concorde tunnel connecting the Quai des Tuileries to the Avenue des Champs-Elysees”
Why are there so many works going on at once?
Some Parisians have suggested that the reason all this work seems to be happening at once is that there is just one year to go before the mayoral elections.
An accusation which has also been levied at the City's plan for improving life in the poorest arrondissements of the French capital.
However in both cases deputy mayor Emmanuel Gregoire has rejected the claim.
“It's about the mechanics and is related to how the programme is being carried out,” he said, adding “if there's a lot more work in the second half of the term, it's because it takes time to design the projects, then to approve them, before finally launching them.” Photo: AFP
“We're delivering on our promises, and if we stick to our commitments, it's called electioneering.”
But if anyone is to blame for the level of works going on in Paris, it's the 'yellow vests', according to the town hall.
“It is clear that the mobilisation of yellow vests causes delays in construction and overlap of work that was not planned,” said Grégoire.
Director of Roads and Travel Caroline Grandjean said: “The building sites must present as little danger as possible to the police. So every Friday, we remove the barricades. And on Monday morning, we have to reinstall everything, which slows us down.”
French words to know
Construction work – le chantier
Works – les travaux
Pedestrian – un pieton