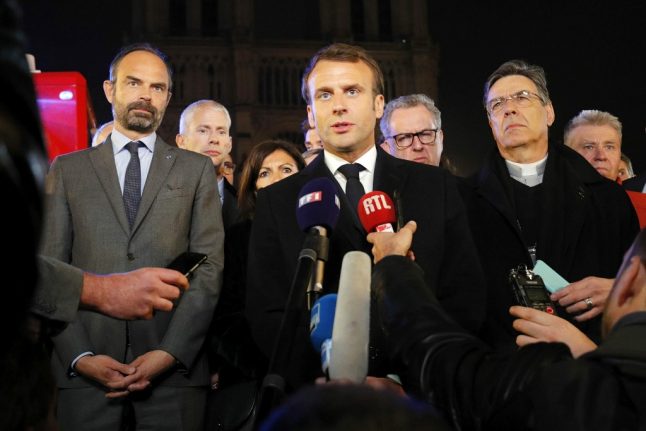 Macron at the scene of the blaze on Mondat night. Photo: AFP

“We will rebuild Notre-Dame”, an emotional French President Emmanuel Macron vowed on Monday evening as he visited the famed Paris cathedral which was ravaged by fire.

With tears in his eyes Macron said that “the worst has been avoided” thanks to the work of firefighters who saved the cathedral's two towers and facade and vowed to draw on “the best talent” to rebuild the rest. People flocked to the Seine to watch as firefighters battled the flames. Photo: AFP

He announced that an international fundraising campaign is to be launched on Tuesday.

He vowed to draw on “the best talent” to rebuild what had been destroyed.

“What happened tonight in Paris and at Notre-Dame Cathedral is a terrible tragedy,” Macron said.

“The worst was avoided even if the battle has not been completely won yet and the next few hours will be difficult.”

The 41-year-old president described the 850-year-old monument at the heart of Paris as “the epicentre of our life” and the cathedral of “all the French”, whether religious or not.

He said that “starting tomorrow” he would launch an international appeal for the restoration of the beloved church.

“And we will rebuild Notre-Dame because it is what the French expect,” he said, flanked by Paris Mayor Anne Hidalgo and Paris Archbishop Michel Aupetit.

He was speaking shortly after fire chiefs announced that the main structure of the cathedral had been saved, although the roof was almost totally destroyed and the spire collapsed.

Firefighters will remain at the scene overnight to get the blaze fully under control, and when the building is safe to enter an investigation into the cause of the fire will begin.