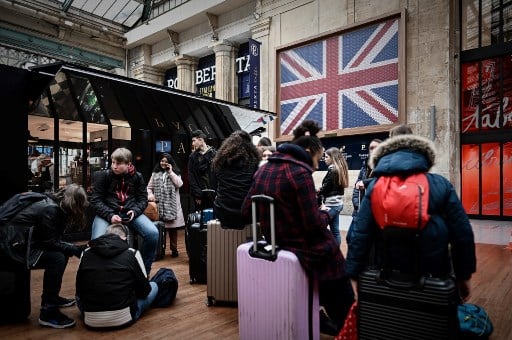 But it warned that there might still be some delays on its services between Paris and London, and customs unions said their action – which they say has been sparked by Brexit – was continuing and could flare up again at any time and cause fresh disruption..

“Due to industrial action by French customs in Paris Gare du Nord, we’ve had to cancel some trains. If you are on a cancelled train, you can change the date of your journey free of charge or claim a refund. All the other services are running on time,” Eurostar said on its website.

The company had previously advised against all but essential travel until at least April 3, and the high-speed train link now looks like it’s getting back to some sort of normality. The Eurostar link between Britain and the continent opened in 1994. Photo: AFP

Two early morning trains from Paris to London were cancelled on Wednesday, and the 21:03 service was also listed as cancelled on the online timetable.

But all other scheduled trains were listed as due to depart on time. The outlook was even better on the London to Paris service, with just one delay signalled for the rest of Wednesday and all other trains expected to leave on time.

Travel from Paris has been badly disrupted by a work-to-rule protest from French customs officers, which began on March 4.

The protest was originally scheduled to continue until March 20. However unions extended it, and they said that even with the return of almost normal services, the disruption could return.”The action is continuing for the moment. The government has not responded to our demands,” Vincent Thomazo, secretary general of the UNSA customs trade union, told The Local.

He warned that customs officers might carry out sporadic industrial action that could yet again cause severe delays or cancellations. He would not provide any dates for such moves.

“That depends on the officers on the ground,” he said. But he did say his union was not advising against travel on Wednesday.

Instead of going on strike – meaning they would not work at all – customs officers have been carrying out work-to-rule industrial action.

This means that they precisely follow all safety or other regulations, which entails lots of checks and questions which has slowed down the flow of passengers through terminals at Eurostar, Eurotunnel and the ports in Calais.

The customs agents are demanding an increase in overnight pay, a danger allowance, and more staff and resources to help with greater controls that will be put in place if and when Britain breaks away from the European Union.