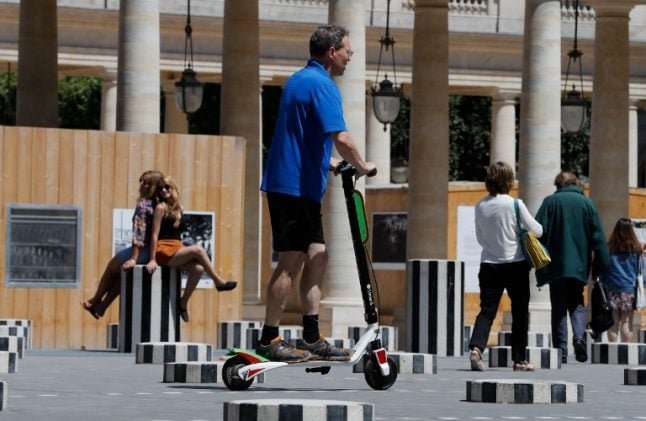 Electric rental scooters have taken Paris by storm over the past year. Photo: AFP

Electric rental scooters have taken the French capital by storm over the past year, providing a welcome environmentally-friendly form of transport but also angering many residents outraged at having to dodge them zooming along the footpath or blocking the way when dumped on the sidewalk.

Now Paris mayor Anne Hidalgo has launched a campaign to stop the electric scooters, run by companies such as Lime and Bird, becoming a nuisance to the city’s residents.

“Footpaths are for pedestrians only!” she tweeted.

Scooters are now restricted to roads and bike lanes, and anyone found riding one on the footpath will have to pay a fine of €90, which rises to €135 if not paid within a fortnight.

The first such fines were handed out on Tuesday, when municipal agents swooped down on a bevy of people riding their scooters on the footpath, Le Parisien reported.

The town hall has also announced that the scourge of scooters parked in the middle of the footpath or otherwise blocking pedestrians’ progress will also be tackled, with a two-pronged approach. Five hundred dedicated parking spots will be created by this summer, while any scooters deemed to parked illegally will be picked up by municipal workers and only returned to the company that owns them once they pay a fine of €35 for each machine.

The crackdown comes less than a week after Paris city hall announced that companies operating free-floating bikes and scooters – of which there are an estimated 15,000 in the city – will have to pay a tax depending on the size of their fleet.

There is still uncertainty about wearing a helmet when riding an electric scooters. The rental firms encourage riders to wear one, but there is currently no legal requirement to do so.