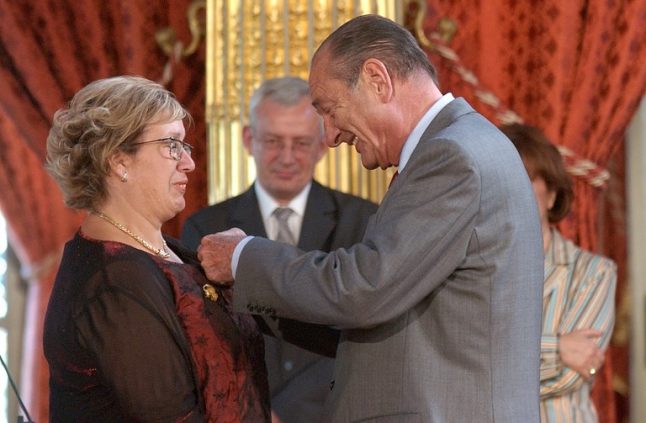 Former French President Jacques Chirac hands the golden Medal of the French Family to Martine Baumann, 45, mother of ten children, during a ceremony at the Elysee Palace in 2004. Photo: AFP
It seems that in order to avoid losing its title as the country with the highest birth rate, France has come up with some incentives to make sure its citizens keep having babies.
The benefits start to kick in with a family’s third child, at which point they become eligible for the carte famille nombreuse (‘numerous family card’). The primary benefit of the carte famille nombreuse is a discount on the cost of trains tickets on France’s national railways, operated by the SNCF. The reduction increases with the number of children:
Three children = 30 percent discount on all tickets
Four children = 40 percent discount
Five children = 50 percent discount
Six children or more = 75 percent discount
READ ALSO:
Additionally, the numerous family card permits its holders a number of other benefits. Paris public transportation offers them a 50 percent reduction on Metro lines, trains, and buses. And many museums, amusement parks, and private businesses offer decreased prices for those who can show a carte famille nombreuse as well.
Anyone with three kids or more can apply to the SNCF for the carte famille nombreuse, as long as they can prove the identity of each family member and that they are legal residents in France.
But the benefits don't stop there.
With four children or more, parents in France can actually be awarded a national medal by the government, the médaille de la famille. Originally known as the médaille de la famille française, the name was changed in 2004 when eligibility was opened up to immigrants, as long as the children being raised were French citizens.
The médaille de la famille is honorary, but that doesn’t mean it isn’t taken seriously by the government. It isn’t enough to merely bring at least four children into the world; the children must be “raised in a dignified manner”, and the parents must “make a constant effort to raise their children in the best moral and material conditions possible”. Bronze médaille de la famille. Photo: Patrick 59240, Wikimedia Commons
The eldest child must be at least 16 years old, and evidence must be provided to show that the offspring have been properly cared for (school enrollment certificates, testimony given by third parties, etc.).
Of course, exceptions are made for special cases, like those who have raised at least two siblings after the death of their parents, those who have taken in orphans, and war widows who have raised at least three children on their own.
A dossier must be compiled – to be evaluated by the prefect – and an investigation carried out, before any medal will be awarded. Traditionally, the award is presented on Mother's Day by a public official, like the mayor, the prefect, or, on occasion, even the President of the Republic.
Originally, different medals were awarded depending on the number of children raised:
4-5 children earned parents a bronze medal
6-7 children earned a silver medal
8 or more children earned a gold medal
But since the law was reformed in 2013, all recipients now receive a bronze measuring 33 millimeters in diameter, bearing the depiction of a family surrounded by laurels and the inscription médaille de famille on one side and the words République Française on the other. It is accompanied by a 32 mm red and green ribbon and is to be worn, like most military medals, over the left breast.
READ ALSO: