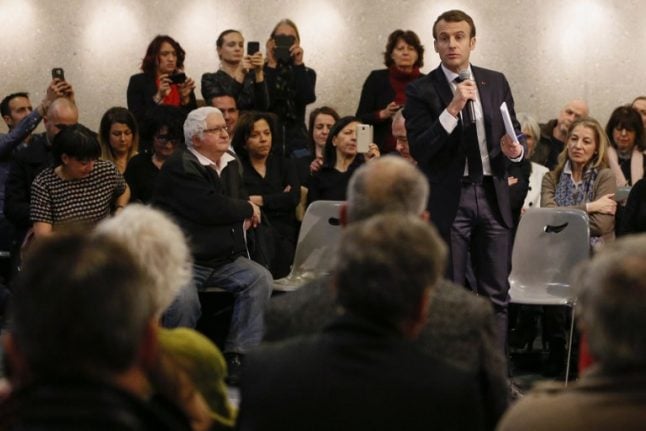 French President Emmanuel Macron stands as he answers questions during a meeting with local residents as part of the "Great National Debate" in Bourg-de-Peage on Thursday. Photo: EMMANUEL FOUDROT / PO
After losing 15 points between June and November, when the yellow vest movement emerged, Macron has recovered four points over the past month, according to a BVA poll released Friday.
The survey, carried out on January 23 and 24, showed 31 percent with a positive view of Macron, while 69 percent expressed a negative opinion. An Odoxa poll meanwhile, carried out on January 22 and 23 and also released on Friday, found that 30 percent of people thought he was a “good president”, while 69 percent thought otherwise.
Analysts say the poll bump reflects the 41-year-old leader's energetic performances in debates with mayors and voters since the public forums kicked off on January 15.
READ ALSO: Macron's 'Great National Debate': How will it all work?
“I'm not going to hog the microphone,” Macron said after a surprise appearance Thursday for a debate with around 250 people in Bourg-de-Peage, southeast France.
After weeks of violent protests by yellow vests who denounce him as a “president of the rich”, he sought to stress his ordinary background.
“You know I'm not an heir, I was born in Amiens,” he said while answering questions and mounting a vigorous defence of his policies over more than three hours.
“If I had been born an investment banker, you could have a go at me. If I had been born with a silver spoon in my mouth, or the son of a politician, you could have a go at me. But that's not the case,” he said.
Even critics admit Macron hasn't shied away from swipes at lightning-rod policies including his scrapping of a wealth tax, one of several measures that have reinforced his pro-rich reputation.
“I can't say he won me over, but you can hear the sincerity in his answers,” a yellow vest protester in the crowd told AFP.
READ ALSO: Act XI and the 'yellow night': What the ‘Gilets Jaunes’ have planned for France
Rallying the right
The protests, which have repeatedly degenerated into vandalism and street clashes with police, have been attracting far fewer people than before the Christmas holidays.
Analysts say Macron's vow to crack down on the violence appears to have won over law-and-order voters on the right. His package of economic relief for low earners in response to the protests also includes measures long sought by right-wing leaders such as tax-free overtime pay.
“It seems that this very severe crisis is paradoxically allowing Emmanuel Macron to revive his strategy of rallying a majority of moderate right-wingers,” said Jerome Fourquet of the Ifop polling institute.
The debates will take place until March 15, after which Macron has promised to take into account people's grievances while pushing through further reforms to put the French economy on a more solid footing.
“If he keeps it up… it could help win him back part of public opinion,” Fourquet said.
The challenge remains daunting, with 22 percent of respondents in the latest BVA poll saying the debates are a good idea, 27 percent dismissing the exercise, and 51 percent waiting to see “what comes of it”.
'Regain the initiative'
“His aim is to regain the initiative” after weeks of failing to stem protests by rural and small-town voters struggling to make ends meet, said Jean-Daniel Levy of pollsters Harris Interactive.
The goal is to prove he is not just a “president for the cities” and “someone who is not in touch with public opinion”, Levy said.
Analysts also note that the protests could be a blessing in disguise for Macron's Republic On The Move (LREM) party ahead of European Parliament elections in May.
This week a 31-year-old nurse named Ingrid Levavasseur said she would lead a yellow vest list of candidates for the elections. A survey after her announcement found the list could garner 13 percent of the vote — largely by siphoning off support from the far-right National Rally and other extremist camps.
That helps Macron, who has made no secret of his plans to form a centrist, pro-Europe alliance to stave off populist movements that have gained steam across the continent.
“Paradoxically, it's the government and the LREM which have everything to gain from a 'yellow vest' list,” said Gael Sliman, head of pollsters Odoxa.
The National Rally of Marine Le Pen “has the most to lose, even though they backed the movement,” he added.
By AFP's Joseph Schmid and Francis Curta