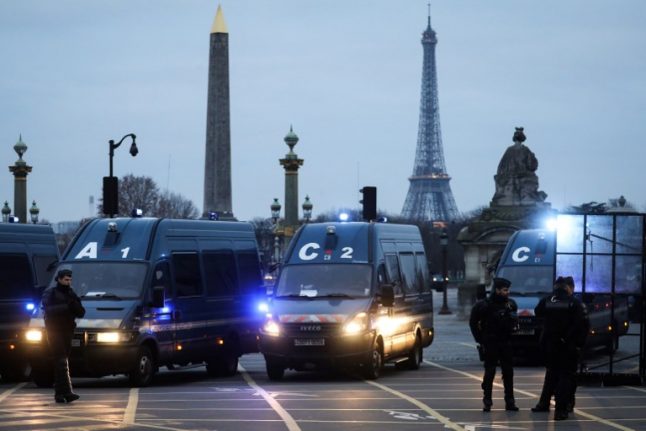 French gendarmes block the entrance of the Place de la Concorde with their vehicles early on Saturday morning. Photo: Ludovic Marin/AFP
Officials have warned they expect this weekend's anti-government demonstrations to be bigger and more violent than a week ago, as a movement which had shown signs of fatigue appeared to gain new momentum.
Armoured vehicles and 5,000 officers will be deployed in Paris, where images of burning cars, smashed shops and daylong clashes between protesters and police have made global headlines since November.
“Blue-chip companies, the media, are all in Paris, we'll be more visible,” Arnaud, a 48-year-old yellow vest organiser for the Seine-et-Marne region near the capital, told AFP.
Others have called on protesters to converge on the central city of Bourges, which could potentially attract more people from cities farther from Paris.
READ ALSO: Town at the centre of France braces for 'yellow vest' invasion
“I hope that in a city where there's been no incidents since the start of the movement, the mobilisation will be strong and peaceful,” one of the organisers said, asking for anonymity.
But Bourges city officials weren't taking any chances, outlawing all gatherings in the historic city centre, removing parking metres, benches and other urban furniture, and closing public buildings and gardens. Mayor Pascal Blanc told AFP that residents were “worried,” with banks and other businesses boarding up windows.
Nationwide some 80,000 security forces will be on hand.
'Tempted by violence'
It was unclear if the Paris protests would again focus on the Champs-Elysees and Arc de Triomphe, or begin in the La Defense business district west of the city.
The city's chamber of commerce estimates that nearly 500 shops have been damaged since the protests began, and many shops are likely to be boarded up and closed again on Saturday.
Paris police chief Michel Delpuech said he expected demonstrators to surpass the roughly 3,500 that attempted to march on the National Assembly last week, and predicted they would be “more tempted by violence”.
“Those who are calling to demonstrate tomorrow know there will be violence, and therefore they are in part responsible,” Interior Minister Christophe Castaner said in a Facebook interview Friday with Brut, a digital news site favoured by many yellow vests.
“Those who think that a few thousand people can make us question our institutions, are wrong,” Castaner added later Friday.
Far-right National Rally leader Marine Le Pen, who has presented her party as the longstanding expression of many yellow vest demands, condemned the government's reaction as “disturbing”.
“To accuse all protesters of 'complicity' with the thugs: here is a new verbal provocation and legal ineptitude waiting to undermine our rule of law,” she wrote on Twitter.
Last Saturday around 50,000 people wearing the movement's trademark high-visibility vests took part in protests nationwide, though that was far below the nearly 300,000 that turned out for the inaugural protest in mid-November.
But authorities have vowed to crack down on the violence that has marred the demonstrations, which began over high fuel taxes but ballooned into a wholesale rejection of President Emmanuel Macron and his policies.
Last week demonstrators rammed a forklift truck into the doors of the ministry of government spokesman Benjamin Griveaux, while a former professional boxer battered two police officers, in scenes widely spread on social media.
'A real debate' –
Macron has called for a national debate on voters' grievances, beginning next week, hoping to sate demands for more of a say in national law-making and tamp down the protesters' anger. But the process risks being hobbled by record levels of distrust towards politicians and representatives of the state.
A poll by the respected Cevipof political sciences institute released Friday showed 77 percent of respondents thought politicians inspired “distrust”, “disgust” or “boredom”.
And it's uncertain if the public consultations will be enough, with many protesters calling for Macron's resignation or an immediate referendum on his presidency.
“I had some hope with this 'great debate', but it's not looking good because they don't want to talk about taxes, and they're the ones who are deciding the subjects,” said Patrick Lerest, a 62-year-old protester in Nemours, southeast of Paris.
“I want us to have a real debate,” he said.
By AFP's Clare Byrne